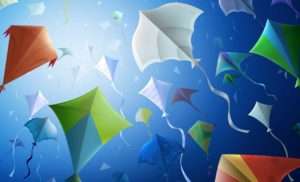 Basant Kite Festival has been banned in Lahore due to many casualties happening due to the sharpened ‘door’ or kite thread. However, this article revisits the fun and glamour of this amazing event Lahore used to have once. Happy reading!

Early last month, Lahore celebrated Basant and the sky had thousands of kites in the sky for many days running.  the start of spring, Basant has in many ways become the biggest festival in Pakistan in the last five or six years, surpassing in gaiety even the two Ids. Corporates compete to provide sponsorship, hotels are full with the Pakistani diaspora and double their usual tarrif, people throng at food plazas and, of course, the shops are busy selling kites with such names as the Kala Ghoda (black horse). In kite flying (no pun intended) the Pakistanis are many steps ahead of their Indian counterparts. The Kala Ghoda, for instance, is ten times the size of the biggest Indian kite. Various innovations have developed as well in theart. Metal wires to fly the kites instead of the traditional manjha and even thin plastic wires that sell by the kilo.

The revelers gather on rooftops beating drums, bursting crackers and even firing machine pistols in the air. They then get down to the serious business of having aerial, kite skirmishes. A kite going down is followed by yells of “Bo-Kata”, quite similar to the Calcutta kite cry. Loud music follows and the upper middle class hops from one party to the other. House owners with big and well placed roofs rent them out for the two-day festival at exhorbitant rates. Of course, the festivity is a high risk activity. Using metal wires is illegal as it leads to electrocution but usage is high as it’s impossible to cut-down these kites in the air. In Lahore itself, police figures suggest that 17 people died and 600 were injured, many trying to loot the stray kites.

Though this time around rain intervened to dampen spirits a bit, the Lahoris continued flying kites even in the night, using high powered search lights to spot other kites. Even President Musharraf gracedLahore to join in the festivities. By the way I intend to return to Lahore next year for Basant with a team of patang bazzez from India and have an Indo-Pak kite skirmish.

Aniruddha Bahal is an Indian journalist, author, founder and editor of the online magazine Cobrapost.com. Ragi Magazine republishes his experience of Basant in Lahore back in 2003, with a special thanks for the contribution.