Passing Sidi Gaber:Notes on the Carnival of Revolution in Cairo 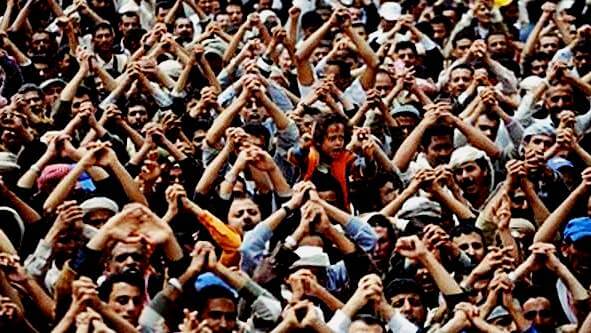 In the midst of recent turmoil in Cairo, one can reflect on the work of Egyptian Nobel Laureate-Naguib Mahfouz, “The Cairo Trilogy”.

All children have read about the pyramids of Giza.It was at a mosque in Giza that the Nobel Peace Laureate Mohamed Al-Baradei faced tear gas and water canons this Friday. Egyptians call their country –Ummi-i-Duniya-the mother of the world. A new birth to this region is occurring.

The architecture and interior decoration of the entire region got a new direction this January, in events which have been described as the first time in living memory. Not since the Food riots of 1977 has Cairo experienced such widespread revolt. The Egyptian youth are no different or less than the Tunisians and face similar issues of lack of employment and opportunity.

In the midst of this turmoil, one can reflect on the work of another Egyptian Nobel Laureate-Naguib Mahfouz. In the introduction to “The Cairo Trilogy” Sabry Hafez sums up that the narrative of Mahfouz is concerned more with architecture and less with interior decoration. The Trilogy succeeds in becoming both a political allegory and a reservoir of social customs, folk tales and songs, popular tunes, common proverbs and the whole undercurrent of urban culture in Egypt in the first half of the 20th century. It reflects the cultural and political development of a society in turmoil under the pressures of British occupation, and draws a highly detailed map of Egypt’s political orientations. As a family saga it succeeds in enshrining major social stereotypes of relationships, emotions and role-playing to the extent that its hero, Ahmad Abd al-Jawad, has become the Egyptian patriarch par excellence. Even today, when the Trilogy is serialized in television, both men and women throughout the Arab world view this archetypal and larger-than-life patriarch with melancholic nostalgia and admiration. This is so because the author portrayed him with similar sentiments for he was based on Mahfouz’s own father. It is ironic that the most memorable patriarch in modern Arab literature is the one who portrays the decline of patriarchy and its distinction and stature.

The novel also has its prophetic vision and warning for the future. Every novel in the Trilogy ends with a death and a birth, but the death and birth of the final novel, Sugar Street, are oracular. The novel ends with the death of Amina, and the imprisonment of her two grandchildren Ahmad and Abd Al-mun’im, the Communist and the Muslim Brother. The two exponents of the conflicting ideologies of progress and regression from the same house on Sugar Street, and are at the end incarcerated in the same cell. But the birth in this final novel is especially significant, for the new-born is the son of the Islamicist, a portent that is still relevant to the Arab reality of the present day.

The political patriarch of Egypt faces a similar fate like the literary patriarch as he finds the army men being welcomed on the streets, protestors shaking hands with the military personnel and taking them down from armored vehicles and then burning the vehicles. The flames of the headquarters of Democratic National Party of Egypt of the President were seen live on all major international channels throughout the night of the curfew (which was never quite implemented as the people took over the streets).

Arab societies are full of “Vasta” culture. The institutions are subverted by persons who have power and connections. The genre of the powerful in these societies remind one of George Orwell’s notes from boarding school in which he writes about the various religious, moral, social and intellectual codes presented and the contradictions which are obvious if you work out their implications. As protestors tear up the posters of the president and his son (groomed successor) and the Headquarters of the National Party their anger at the whole regime of which these are a symbol is evident. There is an essential conflict between the actually existing luxury and snobbery of the persons linked with the regimes, and the condition of the common people whose power is now evident on the streets across Egypt-in Suez, Alexandria, Cairo. On the one side is low-clerical religiosity, sex puritanism, insistence on hard work, respect for academic distinction, disapproval for self-indulgence; on the other, contempt for ‘braininess’ and worship of luxury cars, contempt for working class, an almost neurotic dread of poverty, and above all, the assumption not only that money and privilege are the things that matter, but that it is better to inherit them than to work for them. Broadly the “Vasta-culture” produces barriers for honest working people so that one sees that the various ideals do not cancel out. Any person who has stayed in and observed these societies can seen that these ideals are nearly all unattainable, so far as the common working people are concerned, since they all depend not only on what you did, but on what you were.
Hopefully some of this will change after this January.

A rainbow coalition is probably going to form as the protestors do not have any definite leadership. The same client-regime opportunists may try to creep back in different masks.The sentiment for change is overwhelming with a humanist commitment to freedom and dignity and skepticism against most organized political groups, particularly those with a totalitarian bent.

In this rapidly developing scenario one can reflect on the carnival of revolution which swept Central Europe in 1989. Padriac Kenney wrote about the lessons learnt in opposition while reflecting on these after 20 years. Think of what is learnt in opposition. And again, it is not something that everyone participates in, but a lot of people do. Some of the things that one learns in opposition are compromise, thinking about concrete goals which can be expressed concretely and concisely. You learn about negotiation and you learn about pluralism because at the beginning of any opposition there is always an essence we’re all together, we all agree, and then that starts to break down if you have opposition for a long enough period of time. The Poles learnt these lessons very strongly, Hungarians to a somewhat lesser extent. And in Czechoslovakia there was simply less opportunity to experience that.
Similar parallels are appearing in different parts of the Arab world as cynical operators from Washington give out their measured statements, trying to keep their commercial and strategic interests intact.

As one reflects on the architecture and interior decoration of this entire region, one can do well to recall the words of the writer Mahfouz again who masterfully chronicled these societies.

The Sidi Gaber of the ways of these regimes is arising. Mahfouz once wrote , with the approach of his ninetieth year, that he was passing the penultimate station, Sidi Gaber station, as it were.

One correspondent reporting from Alexandria was asked whether the night-curfew was in place. The correspondent replied that it was difficult to say. The army is out, but so are the citizens. And the army does not seem to be implementing the curfew. When Mahfouz would go to Alexandria, he would always get off at Mahattat Masr, the last station on the line. So when he passed Sidi Gaber station he could afford the comfort of knowing that he wasn’t getting off quite yet. But he also knew that he was edging closer and closer to Mahattat Masr, that it wouldn’t be long before he had to pack his luggage and get ready to exit the train. That is what the cacophony of voices sound like: it is like passing Sidi Gaber.