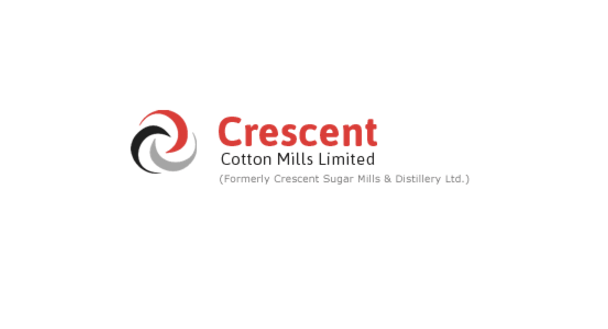 The Crescent Textile Mills Limited is a public limited company listed at Stock exchanges, where its shares are quoted and traded. Crescent Textile was founded in 1974. The total number of outstanding shares is 38,732,722, which are all of ordinary type (common stock). Total market capitalization of Crescent Textile is Rs. 1,003,177,500.

Crescent Textile comes under Apparel & Textiles Industry, and is engaged in the business of spinning, weaving, and towel making. Other operations include combing, dyeing, bleaching, and printing of yarn, cloth and other fabrics made form raw cotton and synthetic fibres.

Crescent Textile markets its products both in local as well as foreign market. In 1997, 76 % of Crescent textiles sales were from textiles. The company uses both raw cotton and synthetic fibers for the manufacture of yarn.

Production Profile of the Company

The capacity (installed and utilized) and summary for the past two years is given in the table below:

The under utilization of the facilities was assigned to the normal maintenance of the plant.

The factory is located on Sargodha Road, Faisalabad. There is a liaison office in Karachi as well. The asset line of the company consists of land-freehold, buildings on freehold and leasehold land, and factory machines (including spindles, rotors, shuttle-less looms).

The products (yarn, fabrics, towels) manufactured by Crescent Textile are daily use products with a very consistent market. The demand remains almost steady throughout the years with slight fluctuations at certain times , which again are easily and safely predictable.

Composite industry is basically  capital intensive industry with a lot of emphasis on the production machinery. The technological aspect sure has an effect on the cost and efficiency of the players. Crescent Textile has recently acquired one 5.2 MW generator to replace the standby arrangements by WAPDA, thus decreasing its fixed charges previously paid to WAPDA.

Within the Apparel & Textile Sub-industry, to which Crescent Textile belongs to, there are three major competitors to it.

A comparison of Crescent Textile’s sales with its major competitors in the fiscal year ending September 1998 is given in the table below:

The comparison shows a decline in the sales of Crescent Textile Mills Limited over the fiscal year 1997-98. Whereas, out of the other three players two did well during the last year.

Theoretical Analysis of the Company

Placement of Crescent textile in the Industry

Crescent Textile is one of the most highly ranked units in the industry with very good EPS(3.8) and profitability. In the past year, however, the position has been more or less stable with negative growth in sales. This pattern is a result of overall downfall of the Textile Industry.

Location of the Company

As mentioned earlier Crescent Textile is located in Faisalabad.

Being located at the heart of textile industry it has various competitive advantages. The cotton crop is within easy reach, and the time for raw material availability is very short.

Again due to its location with a number of suppliers in reach the prices it gets for raw materials are very favorable.

The company as mentioned earlier is heavily dependant on exports as a big part of its sales. Being located far from the sea port, the transportation costs upto Karachi are very high. As many big players are located in the same region, it is very difficult to influence the situations and to bag extra benefits which could have been won if located at some other region with such a big capacity.

Strategic Advantages Over Others:

Crescent Textile is owned by a very influential group (The Crescent group), which has significant say in the regulatory framework to protect the interests of the company.

The company has recently acquired a 5.2 MW unit for electricity arrangement, thus minimizing its dependence on WAPDA and at the same time decreasing its costs.

Objectives and Strategies of Crescent Textile:

Crescent Textile has quality on a very high on its priorities which is obvious through the fact that it was the very first company in textile sector to receive ISO 9002.

The strategy is to focus more on exports through a sustained quality, as exports make a large part of companies sales, and the local market is becoming saturated. Also the company is striving to minimize its costs as the recent 5.2 MW generator is an example of its efforts towards decreased costs.

The company is currently trading at 0.28 times sales. Crescent Textile Mills Limited is trading at 0.80 times book value. Since the price to book ratio is less than 1, this means that theoretically, the net value of the assets is greater than the value of a company as a going concern. However, all three comparable companies are also trading at a book value of less than 1.

For the year ending 31/3/99, Crescent Textile Mills Limited paid dividends totaling 1.25 Rupees per share. Since the stock is currently trading at 25.90 Rupees, this implies a dividend yield of 4.8%.

During the same 12 month period ended 31/3/99, the Company reported earnings of 3.80 Rupees per share. Thus, the company paid 32.9% of its profits as dividends.

The Crescent Textile owned by the Crescent group has been expanding ever since its establishment. The recent acquisition of 72 Air jet Looms at Hattar is just one other of its ventures. The future is very promising as the company has plans to upgrade the technology , working systems, and quality standards. The company is planning to focus its operations more towards fabrics cutting back on yarn.