Abda Khan recently completed her book tour of Stained  across the Atlantic at cities including New York, LA and Milpitas [near San Francisco]. Stained is a gripping story that focuses on honour killing and a struggle of a young girl who seeks justice following rape, amidst pressure to protect family honor.

Abda also attended the National Book Awards ceremony and associated ‘5 under 35’ awards evening. She also met people who share concern against such hideous crimes against women as well as related social stigma that still exist in South Asia.

Below are a few photos of her book tours. 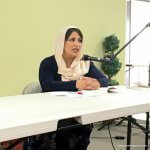