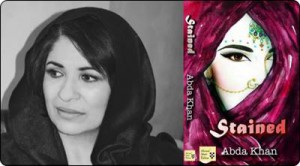 Lawyer turned author, Abda Khan is a fresh voice in British-Asian literature. Her upcoming debut novel Stained focuses on immigration and honour problems within Pakistani community. The novel revolves around the plight of a young British Pakistani woman, who after she is raped, goes to extreme lengths to escape what she sees as shame and disgrace being brought to the family name. However, in doing so, she finds herself in a dark place from which there may be no return. Stained is scheduled to be published by Harvard Square Editions on 3rd October.

HK: Among British Asians novelists, the genre of immigration issues remains an absolute favourite . What inspired you to write Stained?

AK: I was inspired to write Stained largely because of many of the issues I have come across as someone who in the past has lived in, and as a lawyer works within, the South Asian community in the UK. My parents moved to the UK from Pakistan in the 1960s, andI was born and raised in a multi-cultural area. I have always worked in areas with a large South Asian diaspora. For me, the most poignant of those issues have been the problems faced by the women in these communities. Whilst the novel touches upon immigration, the more dominant themes are honour, inequality, oppression, coming of age, cultural conflicts, judgement and justice.

HK: Selina, the main character in Stained, is deep and impressive. However in a similar vein to South Asian novels, it portrays Asian women as weak, naive and exploitable. Even in today’s age, why don’t we see strong woman in Asian literature?

AK: When I embarked on the story, I decided that the characters must be relatable to the majority of the people of a similar background to those characters. I personally feel that Selina is a very realistic character, and therefore easy to identify with. I actually don’t think she is a weak character. She is relatively naïve, and she is at a very difficult point in her life, having just lost her father, and therefore vulnerable. That said, anyone who reads the novel will discover that, in the end, as a result of her experiences, she is an extremely tenacious, focused and determined young lady, anxious to carve her own path in life as an independent young woman. The overall message is that of hope over despair.

HK: Stained’s plot remains very strong, yet you didn’t attempt to introduce any light characters since the overall plot remains grim and tragic. Why so?

AK:  I think when you are dealing with extremely heavy issues such as rape and honour, humour is an enormously difficult component to introduce as an equal to the tragic elements of the story. However, there are sprinkles of light in much of the narrative in the novel, and in the form of some of Selina’s friends along the way, especially Dotty.

HK: Sex crimes such as rape remain taboo and unspeakable inSouth-Asian society. In your view, what is the root cause of this?

AK:I think there is a lack of willingness to talk about and deal with rape and sexual crimes in the South Asian community due to izzat and honour issues. I myself have come across cases where girls and young women have been raped, often by a relative or a close family friend; in some cases, they themselves have kept it quiet, other times when they have spoken up, the family has actually blamed the girl and forbidden her from telling anyone else or going to the Police. Ultimately, the cloak of ‘honour’ allows these crimes and their perpetrators to hide; so very often, the women keep quiet, as they are made to feel that if they speak up, they will be breaching the social norms and bringing their family’s honour into disrepute. In the end, male dominance is the overriding root cause. 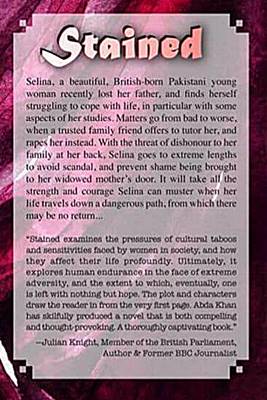 HK: I found Stained fast-paced and enjoyable. Please tell us about your future ventures that our readers should look forward to.

AK:I am currently working on my next novel; it is in its early stages at the moment. I also write short stories. I have been shortlisted in the Wells Festival of Literature short story competition with my story entitled ‘Shall We?’ The winner will be announced in October.