I don`t know about technical brilliance and electronic wizardly… but I know what will be playing in the clubs and soirees in Delhi this winter.

A few weeks ago while lazing about in Delhi, I came across a music-video of a song, the guitar strains of which came back to me through memories of live music at an alcohol sizzled evening at a long-forgotten function at a media-baron`s private function. The young and intense looking Sikh singer on screen, was it the same guy? Juxtaposed between scenes of Indo-Pak locations, he was listed in the credits only as ‘Rabbi’ in the space for album and singer, with the label of Phat Phish Records.

A few days later, driving through Mumbai, I stopped at Rhythm House off Kala Ghoda. The counter person told me that yes, they had heard of the album but it was still expected. There was some typical Bombay sniff-sniff with the response. I ended up buying some old Camel and Diana Ross instead. Once again, later on in the evening, I heard the same song getting a play on television again.

Forgot about it till I heard the strains of the same song at an airport book shop in Pune yesterday. 150 rupees later I was the proud owner of ‘Rabbi’. 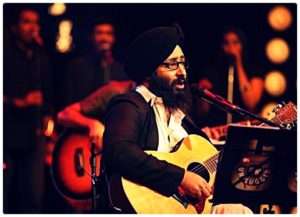 There are nine songs on this album, which can be classified broadly as Punjabi-Sufi genre. The signature tune, ofcourse, is ‘Bulla ki Jana’, at pole position and followed by the equally thought provoking ‘Tere Bin’. Both are eminently danceable. Swayable, actually. Think about moonlit nights off riverside crematoriums and burial grounds for effect. The Taj Mahal in Agra, for one. Or the different kind of dark you get when slicing through lonely and fogged out highways in North Indian winters.

‘Heer’ and ‘Ishtihara’ bring about a different (slower?) mood while ‘Ajj Nachna’ at No. 6 is probably the only Bollywood kind of tune. There is a bit of remix brilliance along the lines of some of the Nusrat Fateh albums done in England on the 7th track, ‘Gill te Guitar’.

My favourite, however, is the last number on the 9-song album, a slower and thought provoking version of the ever-green ‘Jugni’ series.

I liked this album because sitting here in Delhi, year 2004, it reminded me in my DNA of something that my forefathers may have heard too.

Every now and then one comes across a Punjabi song album which promises to occupy mind space for some time. I don`t know about technical brilliance and electronic wizardly, both of which seem to be present here in ample measure, but I know what will be playing in the nightclubs and soirees in Delhi this winter.

Rabbi Shergill, the singer, from what I learnt last night, is another young singer with ideals and a non-mainstream label supporting him. But differently, from the rest, his ballads have historical strengths. Buy the album legally, please, and support talent.

I would have quoted more from some of the lyrics on the album sleeve but the print is terribly small. Most of the lyrics are available, however, on the Internet already. Rabbi has already played to full houses in Karachi, it appears. Time to hit the airwaves now, it would seem.