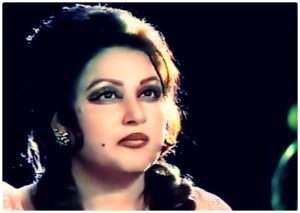 In memory of Noor Jahan

Our best-known Pakistani nightingale is gone. Her journey from birth (real name Allah Rakhi as reported by the BBC) in Kasur British India in 1926 to her death in Karachi, Pakistan in the year 2000 has ended. And this one admirer amongst many has a few words to say about her journey, one which touched the emotions and lives of millions in its path (writing about it is by no means an easy task). So I will just start by saying “Thank You” Madam Noor Jahan for enriching our lives. Thank you for reaching the frontiers of musical excellence in the vocal arts as few have reached such starry heights of achievement. Few deserve and are awarded such praise. And it has not come from just from this writer, who doesn’t know a “sur” (note) from a “sar”(head). I have heard no one less than India’s top Diva Lata Mangeskar pay tribute to Noor Jahan. Lata’s sister Asha Bhosle was similarly inspired enough by her to do a remake of Madam’s songs.

By calling her The Melody Queen or Mallika-e-Tarrannum we honored her. As she ruled our hearts for at least five decades in two countries and languages (in both the Urdu and Punjabi) her contribution to our musical lives remained unmatched. The Late Nusrat Fateh Ali Khan was the only other to reach similar success but he did not have much time with us. He was the meteor to the Melody Queen’s comet. But now that comet too will not return.

The last time we saw Madame Noor Jahan perform here in Northern California was in the late 1970’s. This writer came back from that San Francisco show truly inspired. As Sikh families came from Yuba City, Muslims from Sacramento and beyond and the local Hindu fans from the San Francisco Bay Area, I had no idea before the show that there were that many people from South Asia in this entire region. And when she sang they were all mesmerized.

Noor Jahan represented the essence of our musical and social culture. She was not easily intimidated and was very vocal with her feelings. She was “earthy” and at times crude with language. But at the same time ironically she gave a vocal polish to Urdu and Punjabi poetic verse, which few have been able to match in South Asia. She felt from the written word. It was that feeling, the cry, the longing in her high notes that appealed to us Pakistanis. And when this lament crossed the border to back to India where it began in the capable hands of Master Ghulam Haider, it continued to find much appreciation.

Patriotic Pakistani Songs became her hallmark in times of war. Noor Jahan inspired many with that Patriotism during Pakistan’s conflicts with India. One can say that she was a “Frontline Singer” because her words once carried a nation through wartime and inspired fighting Jawans (Soldiers) at the border, Air Force pilots in the air and Navy personnel alike. Her contribution to the war effort on behalf of Pakistan will be long remembered. Noor Jahan was not just a singing Diva, but a Pakistani icon. In a country with few such icons exist she will be a difficult personality to replace.

And now for those who are skeptical of all icons. To explain to them why this writer is generous with praise for Madam Noor Jahan is not difficult. Why should it matter to an American of Pakistani origin, that the Melody Queen who never heard of me is no longer with us? It is because it matters to all people who appreciate art. It is the Urdu “Fun” (art) and not the English fun that is being recognized here. Why do Americans appreciate Barbara Streisand? And why do Indians still appreciate the work of a Pakistani “Frontline Singer”? It is really one’s own journey through life that dictates who our objects of admiration are. And one has to admit that this is sometimes difficult (to retain admiration) for people in our somewhat iconoclastic culture in Pakistan.

Noor Jahan was a strong, opinionated and a no nonsense Pakistani woman who had gods gift of an incredible voice. Obviously she was not perfect and some know that much better than this writer. But she became a part of our lives in Pakistan, and mine in the US well into the 1980’s. There are others in that category today, thankfully alive and well, also very talented (and not mentioned here). But this article is not about them. This is a more personal farewell.

So for you young South Asian-American “Desi” kids who try to explain to me the magnitude of talent possessed by Faith Hill, Cristina or Brittany these days, all I can say is you will never know the kind of talent that has left us in Karachi, Pakistan last week.

It was I believe the 27th of Ramadan (Ramzan in Pakistan) when I heard the sad news of her passing. After Iftar, I got into my car and slipped in her cassette (no CD Player yet). And if anyone saw this now middle aged Pakistani drive his car slowly around the town of Roseville, California, it was because I was listening to that song of love, anguish and hope written by Poet Faiz Ahmed Faiz which I continue to consider the best ever sung (if not written?) in the Urdu language. It was “Mujh sey Pehli Si Mohabbat Meray Mehboob Na Maang” (Love, please don’t ask me for love, like our first love) sung by the Melody Queen Noor Jahan a very long time ago. And it was the best way I knew how to bid her farewell. So Goodbye Allah Rakhi, Ab Aap ko Allah Rakhay (now let god keep you). I just wanted say “Thank you” one last time for being a part of Pakistan and our lives.

Republished with a special thanks to Ras Siddiqui for the contribution.