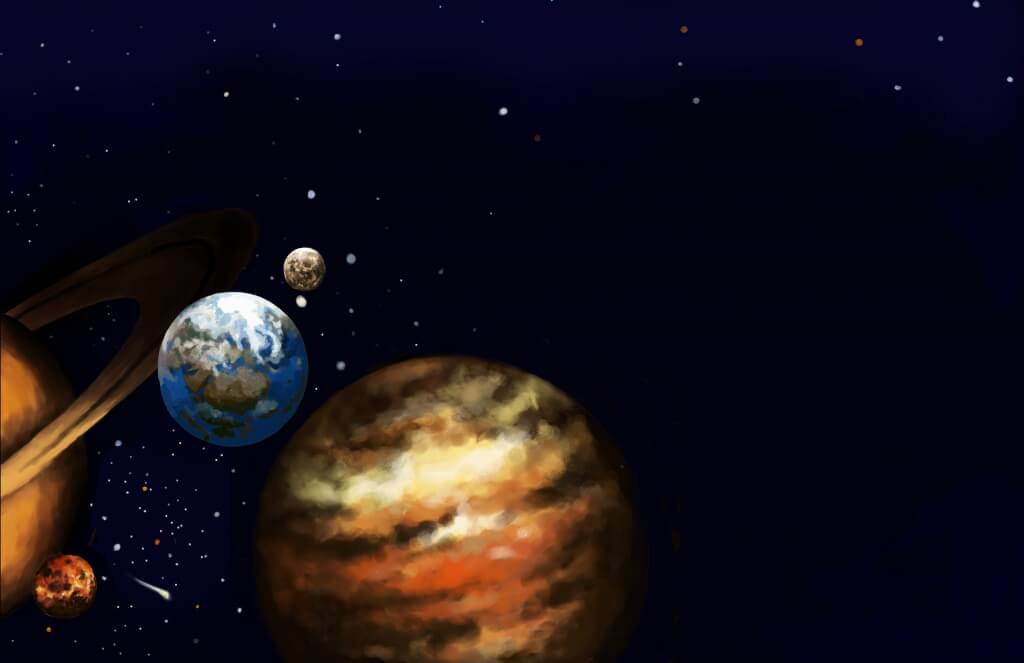 The human being is ever craving for company in this seven-colored world, O Lord! Where is a companion for the soul? Let this world descend from my sight, the way sun and moon descend beneath the horizon; let a day appear before me that does not belong to the passing time.

O Lord! You are my beloved. Your face is my faith and my Quran. Let me see it, for the sun doesn’t lose anything by giving out its rays. A passionate soul like mine is not to be found in this age when people are held back by reason. So light up the darkness of my heart with your light like a moon.

O Lord! I am a mortal and my light is like a short-lived spark before your everlasting illumination. Make me immortal and grant me the strength to tread upon the path that you have laid open before me. Make my book easy for the youth to understand, for I am going to tell of another world.

You feel happy when you are near someone you like, and when you are away you feel a burning desire to meet again. This cycle of presence and absence wouldn’t have been possible if there was no world, and that is precisely why the world sprung from the Divine Life in the beginning. If you look around yourself carefully, everyone is longing for something or the other. If you look within yourself, you will see that you are longing for your meeting with the Creator.

And hence it was that the world came into being. Everywhere you could see how happy everything was upon receiving the gift of existence. The moon and the stars were trained for motion and so many lanterns lit up in the atmosphere. The sun positioned itself on the blue sky and the brocade rays set alight the first morning. The whole world, newly born, was then surrounded by the energy from the daybreak.

The earth, however, was but a barren land. It was a desert without a caravan. Not a single lake gushed from the mountains, nor did any clouds drift in the wilderness. No bird was heard singing its melody on the branches of the trees and no deer leaping around in the grazing lands. The land and the sea lacked all splendor and luster and the entire earth was wrapped up in a cloud of smoke. The vegetation had yet to see the spring season and till then it lay snugly buried deep under layers of earth.

The blue-sky overhead mocked the earth for being in such a forlorn state. It made fun of the earth’s dreariness:  “Never have I seen anyone like you before!” Said the sky to the earth and then added that the earth was blind because it didn’t have bright stars and its light was only borrowed from the sun, moon and stars in the sky.

The earth felt tormented. It complained before God and cried over its poor state. The cry did not go unnoticed. From across the heavens, from the far side of the universe came back a reply.  “You are unaware of the trust I have given you,” said the voice. “Do not despair, and look within. The human being will be made from your dust. Its soul will be lighted from the Divine spark, and not from the light that comes from the sun, the moon or the stars. It will have power over the entire universe through its understanding and ability. Its love will reign over time and space while its knowledge and judgment will choose the path that’s right. Its wisdom will surpass Gabriel. Undoubtedly it’ll be a product of dust but its flight no less than an angel’s – flying to the higher realms even beyond the sky. True, it will also be impious to quite an extent and will shed pointless blood of the innocent yet even its weaknesses will result into progress and prosperity. The universe will further enlighten its wisdom so that it beholds the Divine Essence through the traces of His attributes. Anyone who immerses in the appreciation and love of the Lord’s magnificence is in fact the commander of all the existence.”

The angels then began singing a song:

Such glory shall the man of clay[1]
Own far above the angels’ light
That with his star of destiny
He’ll make the earth like heaven bright.

Possessed of such a mind that feeds
On every storm that time may bring,
He’ll fly and clear across one day
The whirlpool of this azure ring.

Consider what man signifies
Evolving to what’s yet to be,
A subject heaving into form.
Of him why should you ask of me?

Soon fashioned forth in rhythmic poise,
This subject old, this common man,
Will with his rapturous impact
The heart of even God attain. 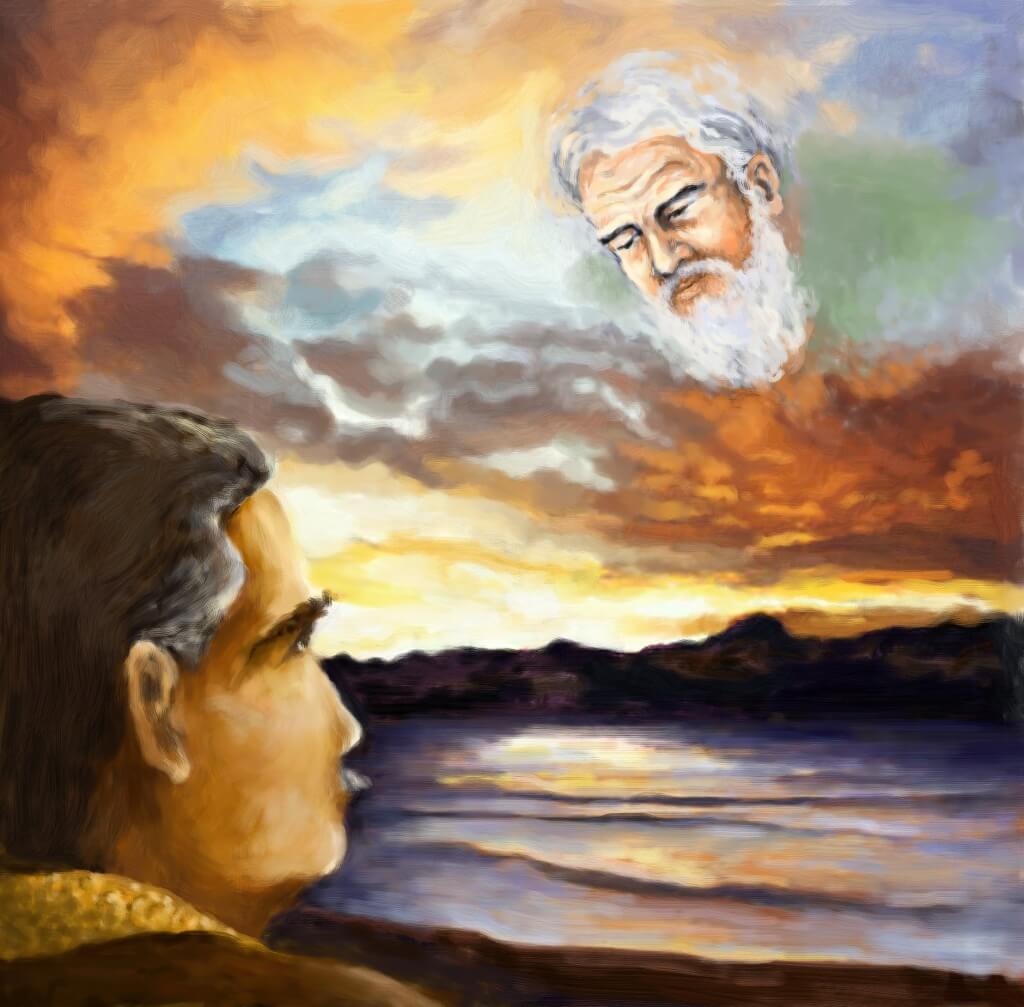 Love often seeks wilderness because the noises in the city kill its flame. I, too, didn’t find anyone with whom I could share my secrets, and therefore went to the riverbank outside the city. The sun was setting, and the blue water was turning red with its reflection.

Sunsets fascinate me. They are a strange phenomenon of nature, bringing the colors of daybreak to the evening – and the colors are so beautiful that I won’t be surprised if I were told that a blind man developed a sense of sight through the magic of sunset. On that particular evening that same magic made me speak to my own heart. I talked, I longed, I searched. “To live a life that is going to end in death is such a burden,” I thought. “It is like being alive and yet not having a life!” My heart grieved over the fact that I am mortal although I was created by an Immortal God – how close to immortality am I, and yet how far away! I longed for my true beloved, my Creator. In my agony I began singing this song from the poems of Rumi:

I long for honey lips of thine
And love the garden of thy face;
O dance with me a measured pace,
I’ll hold thy locks and quaff the wine.

But yester-eve a lamp in hand
The Shaykh did all the city span,
Sick of mere ghosts he sought a man,
But could find none in all the land.

The waves slept in their watery bed, and the horizon went dark after the sunset. A lonely star appeared on the sky, and I saw the spirit of Rumi emerging from behind the mountains. His face was bright like the sun and he looked as fresh as a young man despite his very old age. He said to me, “Life demands witnesses on its being – even God gathered all the souls on the day of creation, and asked them, ‘Am I not your Lord?’ You should seek three witnesses on your existence. The first witness is you, yourself. The second is the consciousness of the other – to behold oneself through the other. The third witness is the light of God. If you can sustain yourself in the presence of God, then you can count yourself amongst the immortals.” Then Rumi illustrated his point with the example of the Prophet. On the eve of Meraj, the Prophet made a journey across the heavens and didn’t stop until he reached so close to God that even the angel Gabriel had to be left out of the final meeting of the Prophet and his Creator. The Prophet not only surpassed the limits of space but also those of time – just a fraction of a second had passed on Earth when the Prophet returned from his long trip.

I asked Rumi about how one could make this journey towards immortality. He said, “It is like a rebirth. Just as you arrive in this world through a birth, another birth takes you out of this world. However, this rebirth comes through the inner strength of Love. Remember, the essence of humanity is the power to see God. The body cannot hinder your flight once the power of true Love takes over the soul.”

The Spirit of Time

Rumi’s speech left me restless and every part of my body tremble like quicksilver. Between the east and the west a cloud of light in the sky caught my eyes. Out came an angel from the cloud. It had two faces, one like fire and the other resembling smoke. One illuminated like a star and the other dark as a night. One of his eyes was wakeful and the other asleep. The wings were very colorful, made lively with red, yellow, green, silver, blue and azure. His temperament was like a flight of imagination. In one breath he traveled between the heavens and the earth. Every moment he experienced a new desire and soared in a new atmosphere.

He said, “I’m Zurvan and I command this world. I can be seen but I’m also out of sight. Every strategy of mine is linked to destiny. I target the living and the non-living. It’s only because of me that a bud blooms on a branch and a bird chirps in its nest. My flight causes the seed to grow into a tree and my effects change every farewell to a union. I torment and I reward, I inspire thirst so that I may be able to quench it. I’m life, I’m death, and I’m resurrection. I’m the sense, the hell, the heavens and the celestial bride. Men and angels are in my grasp and the earth, created in six days is my son. I am every flower that you pluck from the branch of a tree. Every object within your sight has been given birth from my womb. The world is under my spell and I age it with every breath I take. But a courageous man once broke my spell; he was someone who said, ‘There is a time when I am with my Lord and no angel or messenger can interrupt.’” I knew that Zurvan was speaking of the Prophet, who ascended the heavens on the night of Meraj. Zurvan continued, “Whoever sets aside in his heart a time for His Lord can defeat my enchantment. If you wish to be free of my grip on you, then that is the key!”

There was something in his eyes that distanced the old world from my sight. Either my eyes were watching a new world or else this very world changed itself. Whatever the case may be, I sank in the color and smell of this world and reincarnated in a world without chaos. My thread snapped from my surroundings and I found a new world instead. My soul trembled at the event that took place and thus a new world was born from my existence.

My body became weightless, the soul increased its pace and the eyes of the heart opened. The hidden phenomenon began to emerge and I heard the tune of the stars:

Life’s kernel is thy sense,
World’s secret is thy love,
O earthly mould, we joy
That thou hast come above.

Moon, Venus, Jupiter
Are rivals for thy sight
The hope of thy one glance
Doth keep them gay and bright.

Life dwells in truth, it doth
With urge for growth extend,
The country of the Lord
It is from end to end.

Continue to Chapter 1: Stopping by the Moon

[1] The songs in this book are taken from The Pilgrimage of Eternity, a versified translation of Javidnama by Shaikh Mahmud Ahmad.