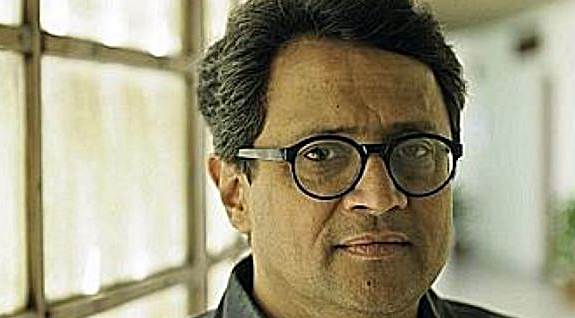 Mukul Kesavan is the author of Looking Through Glass (Farrar, Straus, Giroux: New York, 1994) and is working on his second novel (a chapter of which is included in The Vintage Book of Indian Writing 1947-97).
At about the same time as the Pakistani and Indian foreign ministers met in Delhi last winter I was there looking up people who had recently published on the subject of Partition. Fifty years were up and I was curious to know what Indian debates were occurring on Partition. One of the people I contacted in this regard is Mukul Kesavan.
Along with Arundhati Roy and Amitav Ghosh Mukul Kesavan is among the first rank of Indian writers writing novels in English. His first novel Looking Through Glass, a bestseller in Delhi when it came out two years ago, I would call a ‘Partition novel’. Most of the novel is set in the period between 1942, the year of the Quit India Movement, and 1947, the year of Independence and Partition. Mukul Kesavan also teaches history at Jamia Millia in Delhi.

In a wide-ranging conversation Mukul spoke about his depiction of Jinnah in the novel, the Nehruvian legacy, Zulfiqar Ghose, the writing of historical novels, the issue of location for an author, and Indian secularism.

I met Mukul at the India Intenational Centre, I.K Gujral’s (for that matter South Block’s) haunt in Delhi. I didn’t see Gujral but in the courtyard I did see tall,lanky, white-maned M.F Hussain. I was surprised to see Hussain in a public space since the Shiv Sena’s recent violent protest against his depiction of Sarasvati in a painting.

To my Pakistani eyes Mukul looked neither novelist nor historian. The only thing Pakistani I could compare his thirty-something bearing to was the confidence of a missionary school educated entrepreneur. Or a young Pakistani academic teaching at, nothing less than, Oxbridge or the Ivy League. So his look was unnerving. This was a Delhi-based writer, of novels for god’s sake, who quietly exuded intellectual confidence and, heaven’s (!), prosperity.

R A: It must be as hard to get Pakistani books here as it is to get Indian over there. Your novel presents a sympathetic sketch of Jinnah’s cause as well as the nationalist Muslim cause, and is critical of both Gandhi (indirectly) and Nehru (directly). And its a best-seller in India. Yet nobody has reviewed Looking Through Glass in Pakistan for two years.

M K: The only Pakistani writers one hears in India are all outside Pakistan. Zulfiqar Ghose is an example. By the way, one would be hard pressed to invent a career like his…

R A: Yes, I think he has set all his novels in Latin America. What do you think about writing from India, instead of, say, from a base in the west?

M K: This Derridaean thing about location I don’t buy. I don’t think writing out of Delhi makes my writing more authentic. I don’t see what’s impeding someone writing about Indian subjects sitting in New York or Toronto. I am sure sitting there we would have different existential crisis, but so what? Also, being based in India may have nothing to do with ‘honorable’ intentions, I mean I may rather want to be in Amherst but I am unable to get a job there. What is good about being in Delhi is that I can ring up someone here and ask them questions about Naukar, Biwi aur Ghulam (the Meena Kumari and Guru Dutt starrer).

R A: Looking Through Glass argues so much history it seems very much as if a historian took on the novel genre.

M K: I make historical points but I write novels because I’ve always liked reading them. I didn’t write a historical novel where a whole world in the past is recreated. E.L Doctorow (the American novelist) does that, and when I finish reading his books I am exhausted. My narrator in Looking Through Glass is a twenty-something who travels back to the world of the 40’s. That world is seen through his eyes. But what historical points are you talking about?

R A: For example, behind the Jinnah of your novel I see Ayesha Jalal and not Stanley Wolpert’s ideas. Ayesha Jalal has argued for Jinnah’s greatness in his role as barrister for the Muslim minority cause. As opposed to Wolpert’s idea, traditionally understood, of Jinnah as Moses leading the Jews out of Egypt.

M K: Don’t you think her’s is a much better argument? But I disagree with her that he was playing his Pakistani card till the end. What do you think?

R A: I have questions. I don’t understand how Jinnah could say in his address to the Constituent Assembly, let there be no Hindu, Muslim or Christian in Pakistan, when he was engaged in the politics of identity for the previous decade?

M K: Well, there’s always hope. And he did believe in his class. Jinnah and Nehru, men of a class, believed in it’s values. In the address you refer to Jinnah’s class is showing. When Congress took in well-behaved Dalits I don’t think Nehru could have visualised the BSP (Bahujan Samaj Party) fifty years down the road. Look how Jinnah believed in his values. He disowned a daughter, a child from a marriage with a woman he was in love with. And it was a very tender and passionate relationship.

R A: In Pakistan we are forever competing for ownership of Jinnah’s legacy. These days there is a furor over the movie made in Karachi.

M K: What was your Akbar S. Ahmed thinking casting Christopher Lee as Jinnah in the movie! You know that Rushdie, in an essay or article years ago when the movie Gandhi came out, said Attenborough’s Jinnah looked like Count Dracula! For your generation I don’t know what Jinnah means, but for us the time is here to take Nehru apart. I respect that man for so many things but he was wrong about a lot. Nehruvian secularism was like a salon. If you said the right things you could be a member. If you were from some, say, UP qasbah there was a lot you had to leave behind to be a member. You couldn’t say, for example, my family was from Faizabad and it was wiped out during Partition. Now that secular ideology is threatened those people who never really felt at ease with it are not around to defend it either.

This article was published in The News last year in the column Perspective South Asia. It is republished with author’s compliments.