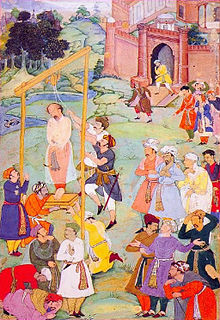 Among the mystics of Islam, Mansur Hallaj is a controversial figure. He was executed In 922 for raising the cry “Ana-ul-Haq” (I am the creative truth), a statement which was held to be Kufr by the orthodox. He also advanced the theory of Huwa Huwa according to which man is the personal and living witness of God.

In 1908 in his thesis “The Development of Metaphysics in Persia”, Iqbal said that the Sufi school became wildly pantheistic in Mansur Hallaj who in the true spirit of the Indian Vedantist cried out “I am God”. In 1919 Iqbal read Massignon’s treatise on Hallaj. Massignon explained that Hallaj’s theory implied that Man is created in order that the love of God may be manifested. Man is an image of God, and God has chosen him for the manifestation of love. Thus man becomes endowed with divine attributes (Huwa Huwa, He, He). Massignon held that Hallaj did not say that Divine Unity resulted from the des¬truction of the personality of man. On the other hand Hallaj held that by the love of God the human personality became more perfect. The Ishq which Hallaj described as divine essence was an active and creative force. The goal of man was to partake of the grace of this love. Thus when man partook of this grace, the reality dawned on him. Massignon’s thesis was that Hallaj had never claimed to be God; he had merely realised the reality of the Self as illuminated with the love of God. That was very close to Iqbal’s view of Khudi. That made Iqbal change his views about Mansur Hallaj. In a letter dated 17th May 1919 addressed to Maulana Aslam Jairajpuri, Iqbal said that because of the researches of Massignon. the fundamental ideas of Hallaj had become clear to him.
In 1927 Iqbal said in one of the quatrains in Zabur-i-Ajam.

“Be lost in thyself in order to realise the Ego,
Say ‘Ana-ul-Haq’, and become the Siddiq of the Ego”.

In his lectures on tne Reconstruction of Religious Thought it Islam, delivered in 1929, Iqbal said that Hallaj’s phrase “I am the Creative Truth” was thrown as a challenge to the Muslim world at a time when Muslim Scholastic thought was moving in a direction which tended to obscure the reality and destiny of the human ego. Iqbal felt that Mansur Hallaj was very much a philosopher of the Self. That provided Iqbal a sense of kindred relationship with Hallaj. In Armughan-l-HIJaz Iqbal said that an ideal nation was that which realised “Ana-ul-Haq” in its striving and proved to be the creative truth, which witnessed God’s reality in its national life.

Iqbal thus came to regard Hallaj as an example of living faith. In Javid Nama in the course of their celestial pilgrimage Rumi and Iqbal meet the spirit of Hallaj in the sphere of Jupiter. Here Hallaj sings the song:

“Seek from your own day a fire as yet unseen

To borrow fire from another is unworthy of you He who is yet unslain belongs not to our tribe.”

Iqbal puts Hallaj the question as to why he did not stay in the paradise. Hallaj replies:

“The free man who knows good and evil,

His spirit cannot be contained in paradise.

The paradise of the Mulla is wine, houris, and page boys,

The paradise of free men is eternal voyaging.

The mullah’s paradise is eating and sleeping and drinking.

The lover’s paradise is the contemplation of Being.

The mullah’s resurrection is the splitting of the tomb and the trumpet’s blast.

For free man tumultuous love is itself the dawn of resurrection”.
Hallaj further says:

“Life without prickings is no true life;

One must live with a fire under one’s feet.

Such living is the destiny of the Self

And through this destiny the self is built up.”

Iqbal next asks: “What is destiny”, and Hallaj answers:

“You who say “This was to be and so happened.

All things were bound by a divine decree and so happened, You have little understood the meaning of destiny.

You have seen neither selfhood nor God,

His resolution is the creator of God’s determination,

And on the day of battle his arrow is God’s arrow.”

Iqbal next asks Hallaj as to what was his crime for which he was gibbeted. Hallaj says:

“I kindled in my self the fire of life

And spoke to the dead of the mysteries of life.

Whoever has not taken his share of its fire,

Has died in the world a strangsr to himself.

I have spoken of its light and its fire Confident of my secret, and that was my crime.”

Hallaj further sounds a note of warning to Iqbal. He says:

You have sought to resurrect the dead, beware.”

This establishes the identity of views between Hallaj and Iqbal.

Then Iqbal poses the question whether there are saints and prophets in other worlds as well. Hallaj says:

“Wherever you see a world of colour and scent,

Out of whose soil springs the plant of desire

Is either already illumined by the light of the Chosen One,

Or is still seeking for the Chosen One.”

Iqbal next asks whether the Chosen one is a man or an essence in being.

Hallaj says that the Chosen One is “His Servant”. He then highlights the attributes of “His Servant” as follows:

“His ‘Servant’ surpasses your understanding Because he is a man and at the same time an essence.

His Servant is the shaper of destinies

He is time, he has beginning but no end

‘His servant’ is naught but the secret of ‘save God’.

‘Save God’ is the sword whose edge is ‘His servant’.

‘His servant* is the how and why of craation”.

Iqbal next asks what is the beholding of God.

‘’First, to implant on one’s soul the Image of God.

Then next to implant it on the world;

When the soul’s image is perfected in the world,

To behold the commons is to behold God.”

Hallaj advises Iqbal to implant God’s image on the world. Iqbal enquires as to how this could be done. Hallaj replies that such image is to be implanted by love.

Iqbal asks Hallaj to explain the difference between the ascetic and the lover. Hallaj replies:

“The ascetic is a stranger to this world;

The lover is a stranger in the world to come.”