The Shadow People – By B.K. Singh 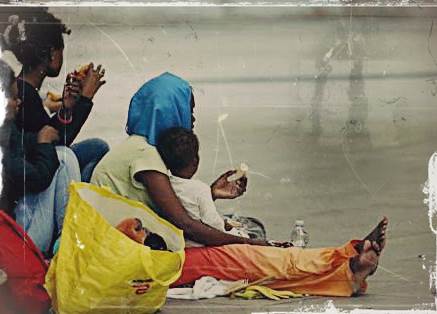 They are everywhere. But nobody sees them, and when they indeed are seen, folks look the other way. They are the ultimate children of the night – as fearful of daylight as of death itself.

They are everywhere. But nobody sees them, and when they indeed are seen, folks look the other way. They are the ultimate children of the night – as fearful of daylight as of death itself. They lurk in silence and they cower around corners – they are the minutest of the American bugs – least wanted except by their own kind and sometimes not even by their own kind – and they are considered the worst of nuisances by the very people who probably benefit the most from the fruits of their efforts.

Everything about them has been simplified to accommodate the common mind which craves such simplicity – and they are reduced to the commonest of those denominators. They were the characters of vaudeville – which got accepted as it was presented. They are the constituents of the mythical melting pot – a mystery vessel in which one is supposed to vanish oneself and add to it one’s most basic essence – sans any of one’s shortcomings – and the inherent impossibility of the feat is considered too sacrilegious to whisper. They are wanted as input – something to assimilate, to absorb, to consume – as long as they leave what makes them original at the door. It never happens fully in real life, of course, but there is something rather romantic about the notion – plus, it puts the onus completely on the newcomers. After all, they are considered the beneficiaries – of a new life in a new land and what is asked of them is considered little, very little! It is only their life they have turned over to the new land and that often does not count for much – even to this day.

They have been around for ages – yet they have never been the same. They are creatures who forever change. Centuries ago, they were blacks who came in chains and they were whites who came as indentured servants; they were the Chinese who built the railroads; they were the East Europeans, they were the Irish; they were the you-name-its! The Germans, the Catholics, the Italians, the Japanese, the Jews, and more recently the Asians – they have all found themselves in those very boots at one time or another! They have changed the face of America forever and they keep doing so. They provide it its rejuvenation, its life-blood, its energy for the present and its drive for the future – yet they are invariably marginalized and maligned as the drains on that very energy. They are its face of the future and yet they are accused of defacing it in countless ways.

There has always been this fear of their being different. The Southern and Eastern Europeans were “different” from the Anglo-Americans. The Irish fleeing the potato famine, the Jews fleeing death-camps, the Italians fleeing the mobs, the Slavs fleeing whatever the Slavs were fleeing from – they were all different in their own ways and yet they all “had to be stopped” from coming in at some point in American history. And perchance if they got in, they were to be held at arm’s length and were to be watched very carefully. The immigrants were the purported cause of every problem under the sky and their deportation, “voluntary” or otherwise, was the holy grail of all solutions to all problems – be it the great Depression of 1920’s, or the great Depression of the 2010’s.

And in the current season, they are appearing in Mexican flavors – as people without papers, people who carry no resources other than their own one body and their own two hands and their very own determination to make the best use of the same.

Their net impact on the US economy, good or bad, remains a matter of debate and more often – of speculation. Studies will find that they have virtually no impact whatsoever in the long-term, but then there would be studies which will find otherwise. More often than not, the results of such studies are likely to reflect the positions and attitudes of those who conduct those studies and even more of those who pay for such studies.

In the current climate, quite a few have less than words of welcome for them. Folks feel threatened by their looks, by their customs, by their different ways – and an even larger number feels threatened by their wages. The bean counters are at it – as they have always been. There are too many immigrants they say – it is not something which has not been said before – only it was said to different folks and only it was said by different folks – but the message has forever been the same.

In the land of the free and home of the brave, a large number of inhabitants are scared silly of what forever has been preached to them as the American Gospel – the legend perpetuated by that lady holding the torch whose light has reached far-away corners of the world and pulled in folks of all kinds – including yes, many of its poor and its tired.

People are scared that they are no more up to the task – up to the challenge of compassion, up to the ability to empathize, up to the intrinsic understanding of what humanity is all about – all of these have become casualties of this process. It is the hot issue right now – just like it becomes the hot issue every now and then when the chips are down, and especially when it is election time! The event of 9/11 has only made it hotter – and it has remained hot ever since and human nature being what it is, will remain so in 2012 and thereafter. The U.S. Congress, which has never met a topic it did not want to legislate – and which once created an Immigration act pegging the percentage of incomers to the then existing percentage of their kind – wants to “solve” the same problem again!

Being a great country often demands greatness on the part of people who may not feel so great all the time! But most people are better at being told that they are great rather than having to prove it through day-to-day deeds. So they want to build a strong fence – it would be only 2,000 miles long. They want to catch every one of them and “send them back”! Some don’t want their children to have the same fundamental rights that their own children do. They don’t care if some of those rights are guaranteed by the U.S. Constitution – they want to even change the Constitution, if need be. But few of them want to actually do the hard work inherent in changing the U.S. Constitution – they would rather accomplish the same ends by merely ignoring it!

When it comes to that one issue – the smartest of folks will immediately turn into card-carrying members of the no-nothing party!

Funny thing is, the more some folks complain, the more this country actually takes in, and even more folks sneak in. Even when the economy hits the roughest of patches, these folks somehow sneak in and find jobs – they probably carry a magic wand, one would think! Something does not ring quite right.

They take their beating – most of it undeservedly. They take it and they take it and they take it. In this dog-eat-dog world of ours they represent the little mice which are eaten by every little dog – even the littlest of dogs – whenever fancy suits and whenever hunger strikes. They toil for their meager wages way below those pf their counterparts in the light. They do with less and their children do with less, their near and dear ones here and afar do with less. They are a people who are used to doing with less – a lot less than many of us could ever imagine.

They are a people who have always had less and who value every little crumb which gets thrown their way. And they are everywhere. You can see them for what they are if you choose to or you can pretend not to see – like most of us would.