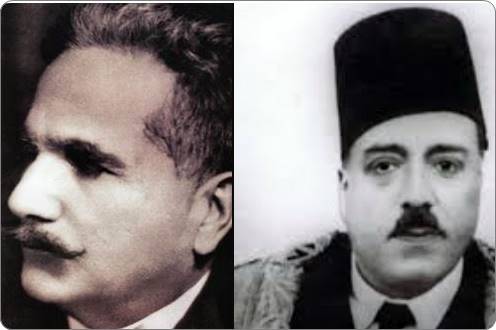 Sir Ross Masood [also Masud] died on 15th August 1937. He was the son of Justice Syed Mahmud, and the grandson of Sir Syed Ahmad Khan. Sir Ross Masood had inherited not only the magnificent physical personality of his grand father, but his great qualities of head and heart as well.

Sir Ross Masood was born in 1889. He was 12 years younger than Iqbal aand died at the young age of 48. He obtained his law degree from Oxford in 1907. On return to India he started practice at Patna. Then he Joined the Education Department. For some time he was the Headmaster of Government High School, Patna, and then served as a Professor in Raven Shawe College, Cuttack.

In 1918 he was appointed Director of Public Instruction in Hyderabad, Deccan. He was the Vice Chancellor of Aligarh University from 1929 to 1934. Along with Allama Iqbal he visited Kabul in 1933 at the invitation of King Nadir Shah. In 1934 he became the Minister of Education in Bhopal State.

When on account of illness, Allama Iqbal was no longer able to practice in the law courts. Sir Ross Masood got for him a monthly pension of Rs. 500 per month from the state of Bhopal. Sir Ross Masood arranged for the poet’s medical treatment at Bhopal, and during 1934-37 Iqbal visited Bhopal many times. He used to be lodged in the Shish Mahal or the Riaz Manzil where he had all the comforts of home and the care and regard of an affectionate friend.

Sir Ross Masood was a multi-linguist. He was proficient in Arabic, Persian, English, French, and Italian. The untimely death of Sir Ross Masood came as a groat shock to Allama Iqbal.

From his sick bed the Allama wrote a moving elegy on the death of his friend. He said:

“This Sun and the Moon, these stars and the blue sky; Who knows if this world is real or illusory?
Thoughts of journey and destination are illusory and fictitious, For the goal and objective of life are unknown.
Because of the sudden death of Masood the great leader of the Caravan,
The cause of knowledge and learning has suffered a set back. The callousness of the men cf the world makes me weep. They regard the wails of the morning bird as a song.” While burdened with grief he posed a few questions:
“Do not ask me what this fleeting life is,
Who knows why there is change and restlessness;
He who is born of dust disappears in dust,
But is this parting temporary or is it complete annihilation. Dust from the roadside has an urge for immortality, Wisdom cannot tell what is the object of all this.
Grieve not that we are prisoners in this universe The heart we possess will break all through its magic.

Then through the shadow of sorrow and grief, the light of faith illuminates the vision of the poet, and he reads in death the message of life. He says:

If Self is alive, death is only a stage of life For Love tests its immortality by death.
If your Self is living then your ocean is limitless;
The Nile and the Euphrates are longing to merge in thee. If your Self is dead, you are like grass before the breeze. If the Self is alive you dominate overall that is in the Universe. The station of the Momin is beyond the Heavens.
From the earth to the Heavens all is sham and unreal.
His permanent residence is the Divine Throne.
He lives neither in this world nor in the dark grave.
The Self discerning who have out-soared this earth,
Have broken the magic of the sun, the sky, and the stars.