The People’s Poet – By Mohammad Gill

Ahmad Faraz is a peoples’ poet. He speaks in the metaphors of prophecy and vision that transcends rhetoric and narrow nationalism. He is truly an international poet, a pan-humanist of the rarest sort. Rare because his poems are love poems, even when they decry, denounce, lament, or accuse. (Mary Mcanally on Faraz quoted by Dr. David Taylor, acting Provost, Aga Khan University, Karachi).

Although I had heard some of Faraz’s ghazals sung by pop-singers in late 1960’s and early seventies, none of them left any deep impression on me. The real impact that I felt for the first time was in mid-seventies (1974-76). I was on vacation in Pakistan from my work in Nigeria. At that time, there was a hot discussion on Faraz in the “letters to editor” column in The Pakistan Times. The sparks in the discussion were created by the following verse of Faraz.

(Put the books of these prophets in the shelves, ‘O’ Faraz
Who will see these works of hatred for the whole life?)

This was during Zulfiqar Bhutto’s time so no real damage was done to Faraz for his blasphemous views other than the verbal barbs from the religious minded writers. Some also wrote favorably of Faraz otherwise the discussion couldn’t have continued as long as it did. Those were also the days when I couldn’t spare much time for the poets and their poetry because of my all-consuming interest in my professional research work. 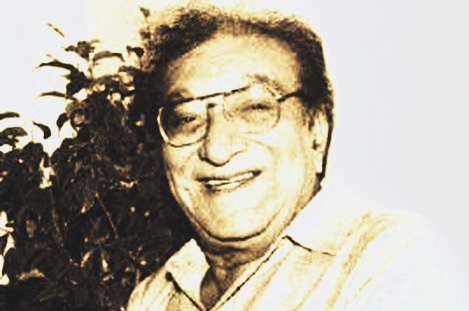 Then I heard his “Ranjash hee sahee dil hee dukhanay kay liye a’a” sung by Mehdi Hasan. One of my musical shortcomings was that I couldn’t appreciate much Mehdi Hasan’s ghazals to the chagrin of my wife who loved Mehdi Hasan’s voice and art. She ruled that I didn’t have a musical rib in my body. But ranjash hee sahee really touched me; I don’t really know whether it was the beauty of the ghazal or the allure of Mehdi Hasan’s artful singing (or both). Afterwards, Faraz was no longer a stranger to me. He found his spot in my hierarchical ranking in the order of Ghalib, Iqbal, Faiz, and Faraz. My intention here is not to belittle the other contemporary poets such as Nadim Qasmi, Hameed Adam (Mahashar me.n le gaii thii tabiyat kii saadagii, Lekin ba.De Khuluus se ham lauT aaye hai.n), Hamayat Ali Shaaer, Ehsan Daanish, and many others but I thought Faraz was in a different and superior category.

In 1990s, my wife and one of my sons bought a couple of Faraz’s books for me as gift from Pakistan when they went there for a short vacation. From one of them (Bey Awaaz Galee Koocho’n Mein), I read Faraz’s poem Mohasarah (Siege). It was just bold and beautiful. He wrote:

I never met Faraz face to face although I have seen him in a couple of international mushairas held in metro- Detroit. His delivery was not distinguished, polished and professional as of many other lesser poets who were there in these mushairas. In one of them, somebody requested him to read his ranjash hee sahee… He said, “Woh tau aap Mehdi Hasan hee sey suniyeay.” Then he said to the effect, “Abb mein aap ko ikk naiee cheez sunata hoo’n,” and he read one of his new ghazals.

I don’t know if he was exiled by President Zia-ul-Haq after his poemMohasarah or earlier than that but Zia-ul-Haq was an unvarnished and simple minded soldier who could appreciate the antics of Shatrughan Sinha’s acting but was not naturally gifted to see any merit in Faraz’s poetry.

Faraz lived in London during his exile when Faiz was also there. He narrated a few anecdotes portraying Faiz’s humane and benign persona (The lyricism of a genuine metaphor that attracts, Dawn, January 24, 2003). In one of them, he said, “Once in Hotel Sherzade (which incidentally now houses the Foreign Office in Islamabad), Faiz scolded a waiter for bringing bread slices for the breakfast completely burnt. But towards the end Faiz gave the waiter a note of Rs.10 in those days when one or two rupees could have been all right. When I (Faraz) inquired why he did so, Faiz said, ‘Bhai hum ney usay jhara bhi tau thaa, (I had scolded him also).”

Although I didn’t find many humorous verses in his works, he however could use humour whenever the occasion called for it. An anecdote is described (Karachi: Ahmad Faraz presents his poetry, Dawn, September 4, 2003) in which he pitched Maulana Mufti Mahmood, a former chief minister of the NWFP, against Maulana Kausar Niazi, information minister in Bhutto’s government (1972). Faraz said, “he as a government functionary had to work hard in keeping a balance between the two – the Maulana and the Mufti – as he composed the following verse:

Frequently, Faraz is compared with Faiz. It is inevitable because both of them were contemporaries and were experts in the art of classical ghazal. Some believe that Faraz wrote in the same vein as Faiz did. Some others assert that although he did not imitate Faiz but Faraz did receive inspiration from him. Faraz’s views on this are as follows: “I would better be known as Faraz. Faiz was a genius unparalleled and along with Ghalib was my ideal when I was a student in Peshawar. I did follow Faiz but never as a disciple or even as a rival. The quality I revere most in Faiz is that even on the harshest and hardest subject, he used polite expressions. True, I was influenced by Faiz but I would like to be known for my own style. It is a coincident that I am found to be closer to Faiz,” (Ode to Peace, timesofindia.indiatimes.com).

Although I plan to end this article on ranjash hee sahee.., I give hereunder a few other verses from Faraz, which are beautiful.