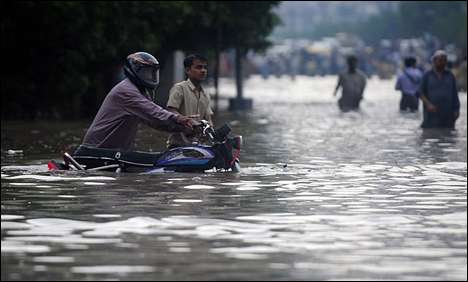 The monsoons have finally arrived. And that too in dramatic fashion. It is quite fitting a day for the monsoons to have started in our very own city of lights (or no lights or hypothetical lights). The biggest power breakdown of the summer, the SBP giving a stern message to the government in the monetary policy speech (that the government has to retire 84 Billion Debt this financial year and no more borrowing!), have dug up roads and half closed rain drains, and the all glorious force of nature that is the wet and the wind i.e. the Monsoon. Quite the theme, and again, quite fitting. It was almost theatrical. Even so much that it the monsoon made a pleasant knock on our doors in the afternoon before the full blast in the evening. There were sprinkles of droplets in the sunshine with people actually thinking that someone had dropped water from one of the flats above.

So what now? The technical fault for the day was yet another tripping. I was beginning to wonder where all the trippings from last year had disappeared to. And now that the rain has started, the KESC in all its humanity, decided to turn off lights during that period so as to avoid any casualties due to short wires or wires fallen in the inevitable pools of water, waiting to electrocute their next victim. And to top it of, KESC wasn’t getting / isn’t getting any electricity from WAPDA. For whatever reasons.

I don’t think we need to get into a blame game here. The culprits are pretty much obvious, at least to me anyway. The government, the coalition partners and the lawyers for keeping up the fantastically long running drama of the Judiciary, while energy problems, and food problems, and oil prices and inflation in general continues going up without being properly or sincerely addressed. This is, according to the Acting President of the Sindh PML-N, a glorious opportunity for the nation to rid itself from future martial laws and army interference and that of course such glorious opportunities should not be just dealt with in haste. They should be stretched out till the economy actually crumbles. Till people dying of hunger actually reaches a hyper number. I am sorry sir; with all due respect this is not a glorious opportunity for any such thing. The mandate by which you came into this power you have already let down by persistently being after the judiciary and the impeachment. Two things I can assure you will have no impact whatsoever in helping with the real problems of this country and this economy.

But I digress. For I don’t want to get into the shambles that is our country’s leadership. I was talking about the culprits. The government as I mentioned for the growing energy crisis. The DHA, in all it’s splendor for starting something in a way which was always going to be impossible for them to finish off, and create double the problems come the rain season. Well the rains started today, and a fresh digging was taking place today at Zamzama. What more can I say. Karachi city planning division. And by divisions I really mean division. Our Nazim, Mustafa Kamal, in most press conferences emerging out of crisis situations, has to half the time explaining to people that those areas are not under his jurisdiction. This city has 14 jurisdictions apparently. KPT, DHA, Nazim etc. Now how can there be any coordinated development work in a city which has 14 various agencies looking after the jurisdiction of various areas. Shahra-e-Faisal alone is divided amongst 6. He is absolutely right to say that put it all under me and then if something happens put my head to task. I agree with him and feel sorry for him. Because of this problem and the obvious inefficiency of the other agencies in doing their jobs, his good work is always overshadowed by a lot of people. The city cannot move in the right direction in this way. It just doesn’t happen.

The rains are now bound to start in the fashion where it’s almost non-stop. Half the roads are dug up. The drains are not complete. The roads are still going to flood, only with mud and wet slippery conditions as well making matters more the worse. And the energy problem is only going to increase. Again, quite a thematic, theatrical and fitting way for the monsoons to arrive in our very own city of lights (or no lights or hypothetical lights or maybe even candle light).