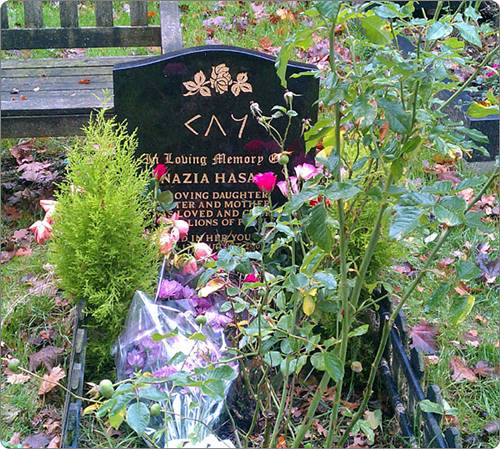 Nazia Hassan (1965-2000) is a voice that still gives listeners goosebumps even after almost 2 decades. At a mere age of 15 years, Nazia debuted her singing career with 1980 Bollywood movie Qurbani with instant hit song ‘Aap Jaisa Koi Meri Zindagi Me Aye’ and rest as they say is history.

Besides being a lenadary singer, Nazia was a qualified lawyer with degrees from The American International University [Richmond] and the University of London.

Nazia interned an United Nations within its Women’s International Leadership program. She was a strong advocate for women’s education and also was played pivotal role within BAN (Battle Against Narcotics), a charity in Pakistan focusing on drug abuse. Nazia also worked later for United Nations Security Council.

Nazia’s final resting place is at Hendon Cemetery & Crematorium in Barnet [London], see google map. It draws admirers across the world. May Allah bless her soul.