Every Ending is a new Beginning by Aysal Waheed

Every Ending is a new Beginning by Aysal Waheed

Life is not easy at all. No matter what you do, life is going to throw challenges upon channels at you.  Sometimes, we can overcome these challenges, but sometimes we mess up, and things don’t go the way we want them to. Just because we failed something yesterday, doesn’t mean we have to fail today. Just because we felt sad yesterday, doesn’t mean we have to feel the same way today.

Regardless of how yesterday went, we have the ability to set new objectives, make fresh decisions, review our strategies and rebuild our relationships each day in order to live a new, successful, and happy life.

We have plans, to-do lists, and goals for each day, yet there are some days when we fail to  complete them. It causes us to feel frustrated , unhappy, and defeated if this cycle continues for a few days or weeks. We then begin to think that we are no longer capable of achieving those goals. Eventually, we give up.

Occasionally, we lose our passion, our courage, our self-control and  our motivation. However, that doesn’t always mean that’s how we have to behave tomorrow.

“The past can hurt, but the way I see it, we can either run from it or learn from it” These are the wise words of a Disney monkey. 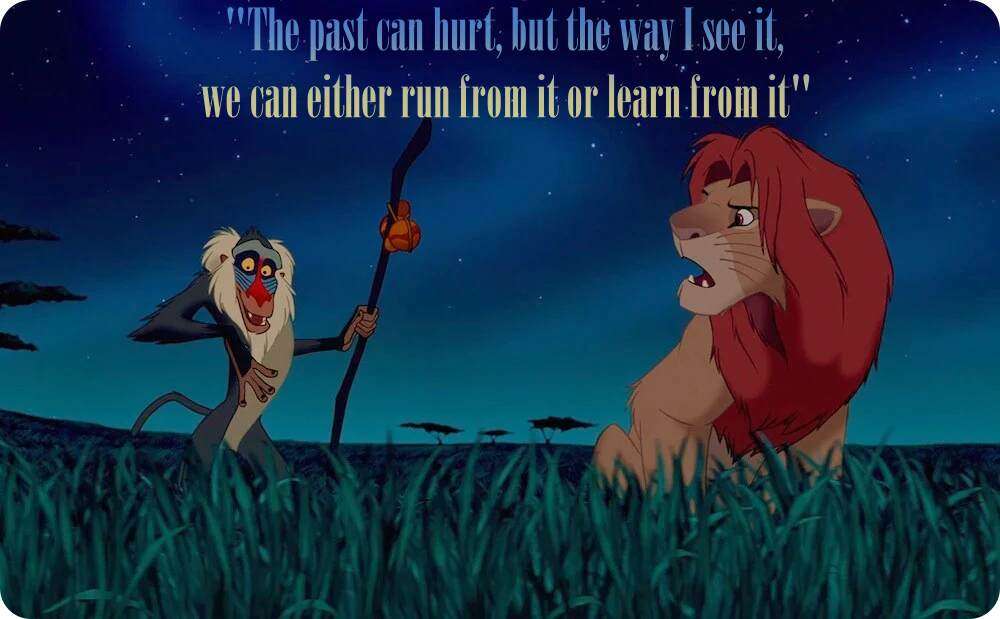 This quote teaches us that the past doesn’t define us, we can either learn from our past mistakes, which will lead us to success, or we can waste our time wishing things were different and doing nothing about it.

“As I always say, don’t focus on the past or you’ll miss the future.” This is another inspirational quote by a disney character.

We can’t control the past, but we can control the present. If someone wakes up everyday with a different mindset, with motivation and energy, this person’s happiness will definitely be greater than that of someone who hates themself because of a past mistake.

Every day is a brand-new day, and with a clean slate to start setting new goals and working toward them, you will surely discover the inner power, skill, and confidence to realize that your dreams are possible, and you will make your dreams a reality.

Another Disney quote that teaches us to appreciate the present would be, “Yesterday is history, tomorrow is a mystery, but today is a gift. That is why it is called the present.”

Here are some examples of people who failed, again and again, but kept going.

Some of you here might be unfamiliar with the name Milton Hershey, but I’m sure everyone here loves a good Hershey’s chocolate.

The creator of the delicious milk-chocolate delight we all enjoy wasn’t so well known. He worked for a local chocolate factory before starting his own chocolate business. But he failed when he made the decision to strike out on his own.

Despite failing two more times, he went back to the family farm and mastered the art of producing the best milk chocolate, which we now enjoy in the form of Hershey chocolate.

Someone I’m sure you’ve all heard of, Thomas Edison. He tried and tried and tried, until he finally made a functioning light bulb. Without his invention, I’m sure our lives would be so much harder. With almost 3,000 failed tries before developing a functional light bulb, Edison may hold the record for most failed attempts before succeeding on a single project. His reply has become well-known: I have not failed. I’ve just found 10,000 ways that won’t work.”

Even in his childhood, Michael Jordan knew  that he loved basketball and wanted to pursue it professionally, but no coach would take him due to his height. The varsity basketball team at his high school turned him down. Jordan fought through all of these setbacks, which helped to define his success.

The Kansas City Star newspaper fired Walt Disney because “he lacked imagination and had no good ideas,” and his Mickey Mouse cartoons were rejected because they were “too terrifying for women.”

I’d like to conclude with the lesson that these people all teach us; that every end is a new beginning, leading to something wonderful.