Chapter 3. The Perils of Venus: Javid Nama by Allama Iqbal 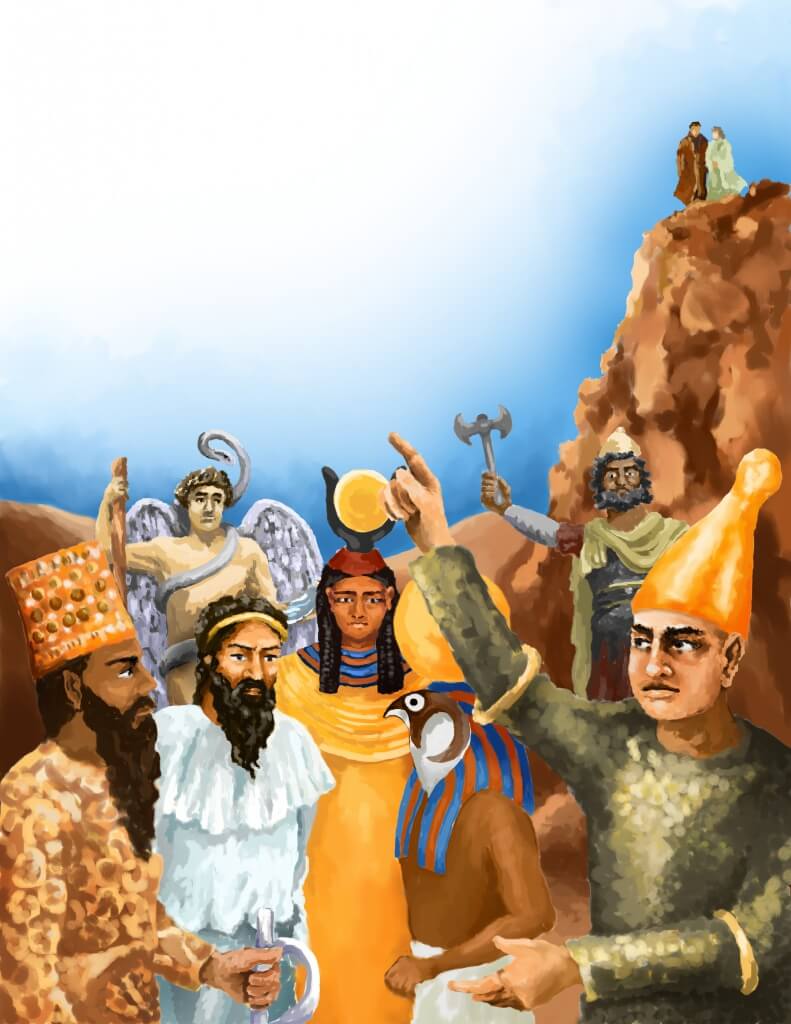 Chapter 3. The Perils of Venus: Javid Nama by Allama Iqbal

The gods of the ancient peoples

Layers of atmosphere between the light of the moon and the sun have erected displays of fire before us so that the hearts of people may flourish. The heat from the blaze made my blood quiver like quicksilver in my veins. This was the awakening of the soul in the body, for when the soul heads towards a world to which there are no limits and boundaries it becomes carefree. Death and resurrection then become merely excuses to add to its splendor.

Standing at the edge of a rock I marveled at the beautiful landscape. It was a valley, leveled and smooth, and its soil was so fluid that would put water to shame. The place was packed with many ancient gods from diverse lands such as Egypt, Yemen, Arab and Iraq. There were gods of separation, union, and those related to one another through race and others eager to form a relation with others. Some held a double-edged sword in their hands, yet others had snakes coiled around their necks. All of them had suffered the blow of Abraham and feared the name of God.

In the meanwhile, Mardukh began addressing his companions. “The humans have turned their face on God,” he said, “They have fled from religion. They are looking at the ancient relics and giving us new birth in the name of expanding their horizons. A new legend is in the making and the air is just right for our desires.”

Baal became rapturous. He sang before the gods a song expressing our present state. The gist of the song is as follows:

“The humans looked beyond the heavens but did not see God, and turned to the material world to seek respite for their souls. Long live the Orientalists who have uncovered us from our graves. O ancient Gods! This is our time now.

“Take a look at the mob in discord, the brood of Abraham robbed of the pleasures of faith in God. They are finding regional identities and thus religion has met defeat at the hands of country and race. The day has turned pale from the fear of the night. O ancient gods! This is our time now.

“The humans should be liberated from the chains of religion and turn to us, since devotion to us is full of entertainment. A visible demon is better than an absent God. O ancient gods! This is our time now.”

Rumi, who praises God through every action, now sang a song with such determination that the ancient gods fell prostrate as if the blow of Abraham has struck them again. This was Rumi’s song:

Recall the days that thou hast spent,
And measure what is yet to be,
Shake off thy ancient slumber now
And let thy mind new vistas see.

My teacher said to me, “Dost thou
Behold how frail the world is set?
Its prizes all, and all its pains,
Deserve thy absolute neglect.”

I said, “The idols in my heart
Are many and for them I fear.”
He said, “This idol-house entire
Thou’lt have to break and shatter clear.”

The tyrants and the Mahdi 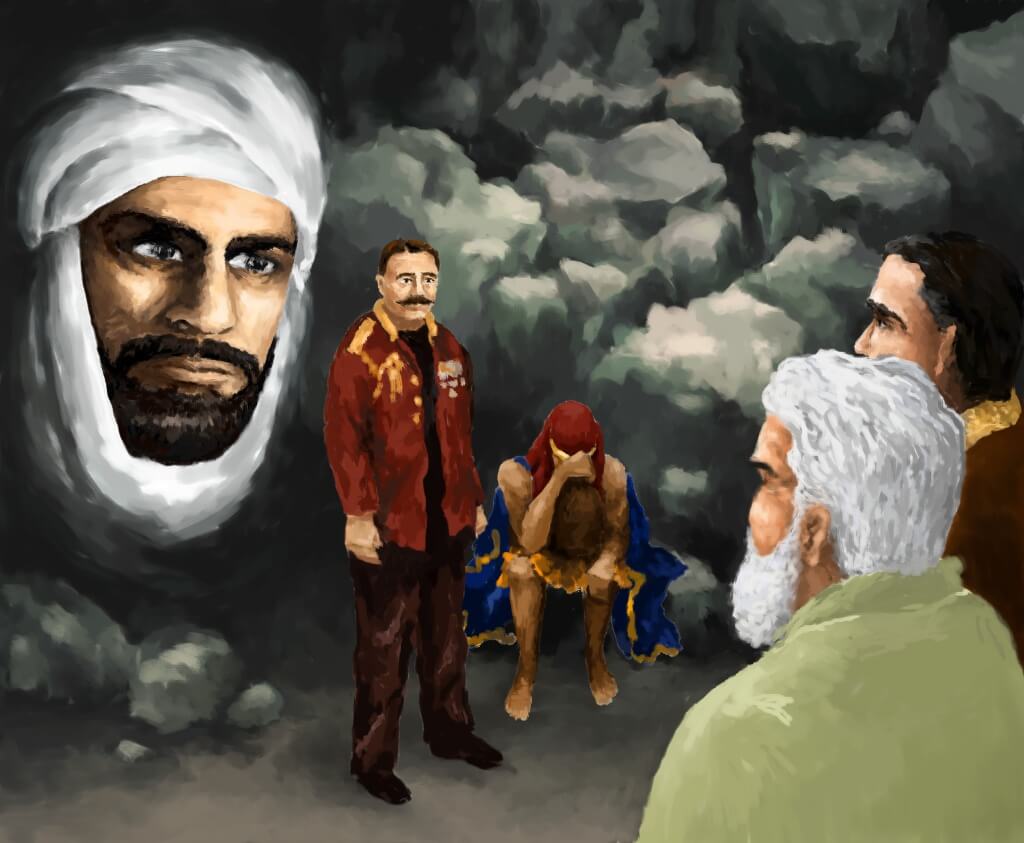 In front of me was an ice-clad mountain. Rumi guided me to a deep emerald ocean on the other side of it. The ocean was motionless and there was neither wave nor ripple in its heart. Rumi described it as eternally calm. Indeed, the lack of movement in water had made it transparent so that everything was visible right up to the bottom. “This is the place of such rebellious souls who lived by the rule of their power and denied the existence of the unseen,” Rumi told me, “Two of them are here, one from the East and the other from the West. Moses struck one while the other fell victim to the vengeance of a dervish. They both died by drowning thirsty in the sea, for indeed the death of a tyrant is one of the signs of God. Hold my hand and follow me.”

Like Moses, Rumi opened the heart of the ocean and the water parted like wind. At the very bottom was a valley that had neither color nor any other physical feature. It was merely darkness layered upon darkness. Rumi began reciting Surah Taha, the powerful chapter of the Quran that calls upon the listeners to remember the exploits of Moses. The darkness was lit up as if by a full moon and now I saw mountains standing at the bottom of the ocean – barren, lifeless and utterly cold. Two men were running around worried and dejected. They looked at Rumi and then one of them addressed the other, “I wonder where did this light come from, at last?” This was Pharaoh, the proud tyrant of ancient Egypt who denied freedom to the people of Moses and refused to believe in the Truth.

To him, Rumi replied, “Indeed, this light is from the source as the light that shone from the right hand of Moses, which he offered to you as a sign of God.”

“Alas!” Pharaoh could not contain his grief. “I could not recognize the Truth at that time. Now the thieves of Europe are digging our graves and our mummies are put on display in the museums of the world. Look at them with your inward eyes and learn the reality of tyranny. The kings rule by creating dissentions among their subjects and countries cannot prosper under them. If only I could find Moses again and borrow a heart that could recognize the Truth!”

Rumi commented that all government is tyranny unless it receives illumination from the light of the soul. Armies, prisons and chains are props of the robbers and a true ruler governs without such things.

Pharaoh’s companion was Lord Kitchener, at one time the commander-in-chief of the British armies. I knew that when he conquered Sudan he opened up the grave of Mahdi Sudanese, a freedom fighter who had defied the power of the Western imperialists. Kitchener avenged the death of British soldiers killed by Mahdi in war by taking out his bones from the grave and casting them into the river. Many years later, some enemy also torpedoed Kitchener’s ship and he died in the ocean. Now he could not remain silent to the rebuke of his companion. “No,” he said to the Pharaoh, “The explorers of the pyramids are no thieves. They are archaeologists and they are opening your graves in order to learn about the past.”

“You opened our graves in search of wisdom but what did you expect to find in the grave of Mahdi?” Pharaoh retorted, and I noticed that the very mention of the dervish’s name electrified the water. Waves rose and leapt across its width. The dervish himself arrived there with a breeze of fragrant air from the heavens. “O Kitchener!” He said, “Look at my vengeance if you can see! You were refused a grave except in the bottom of brackish waters.”

Mahdi’s soul was perturbed and he called upon the rulers of the Arab world and the Africans to unite for liberation. “O camel driver! Our friends have already arrived at the city of the Prophet, and we are still on the way. Is there not a song that could urge our camel to run faster?”

Continue to Chapter 4, The Martians