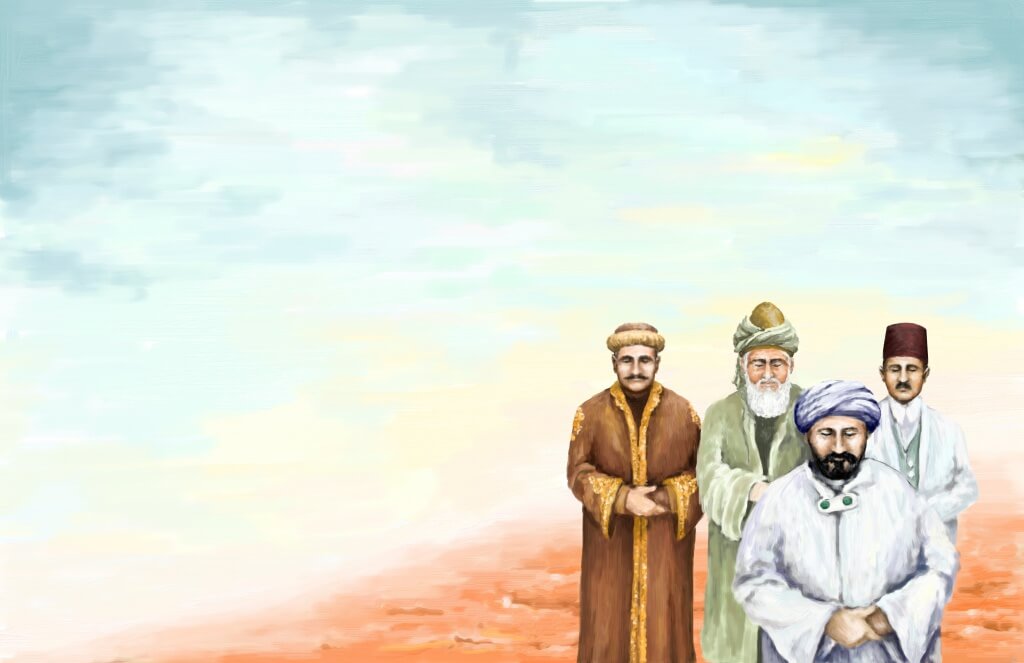 It was hard to believe that it was happening in real. We were traversing the space and were now closing upon Mercury. It turned out to be a little planet born out of a cloud. It also had deserts, mountains and forests but they were untouched by the human being, and hence, there was no one here to improve upon the nature.

“I don’t see any sign of human life,” I said to Rumi. “How come we hear the sound of an azan here?”

Rumi informed me that this was the habitat of the blessed souls. The saints of the past were mostly to be found here, such as Fuzail, Abu Said, Junaid and Bayazid. Then he asked me to hurry, so that we may get an opportunity to pray with the present congregation. We both moved fast, and the congregation turned out to be a little company of only two men – a Turk, offering his prayer behind an Afghan leader. Rumi’s face glowed with excitement as he saw them.

“Two better people weren’t born in the recent times,” he said to me. “Jamaluddin Afghani, the great preacher, and Saeed Haleem Pasha, the Turk soldier and reformer. A prayer offered in the company of such people is a real prayer, otherwise its just hire and salary.”

Afghani recited Surah Najm, which sounded so appropriate for those surroundings. I felt a deep understanding of the Holy Book awakening in my heart, and as soon as we had finished the prayer, I moved forward to kiss his hands. Rumi then introduced me to both of them as “Zindah Rud,” a nickname he had given me in jest. In Persian it meant The Living Stream, and Rumi called me by this name because he thought that I was always searching, bent upon moving ahead with the mysteries of life the way a living stream flows past all barriers in its way.

Afghani asked me to relate the present situation of the world I had come from, and I had to tell with much regret that the Muslims were generally oblivious of their own rich heritage and running after foreign ideas. They were developing loyalties to regional identities at the cost of the greater unity of the global Muslim community and now Communism was taking away the remaining of their strength. It was an ideology adopted by Russia since its Revolution in 1917 and although it aimed at uprooting exploitation, it also taught atheism.

“How clever of the West,” Afghani remarked. “They have tasted the sour fruits of nationalism in their own territories and now contemplating on a greater unity while they are still teaching you to become loyal to the land instead of your own souls? Marx, the philosopher of Communism was no doubt a genius and his ideas have much appeal, but unfortunately he had an evil mind to his noble heart. His philosophy is based on the equality of the belly, whereas an equality of the souls is what truly becomes the human dignity. The West has ignored the spirit for too long and focused entirely on the material world.”

“Look at Mustafa Kemal,” Saeed Haleem Pasha now interrupted. “He is also making the same mistake. He is accepting new ideas but he is doing away with everything old, which is really like throwing away the baby with the bath water. You must know, my friend, that the Holy Book contains many worlds, as yet uncreated. If you are fed up with your own world and want a new one, you don’t have to look very far. Look into the Quran, take out a new world and create it!”

“The secrets of the Quran,” Afghani added with a scholarly dignity, “That must be remembered in the present day are: firstly, that the human being is God’s vicegerent on the Earth; secondly, that the only government worth obeying is the government of God, and not terrestrial tyrannies; thirdly, that all land belongs to God, and the wealthy are nothing but trustees of God who are obliged to use it for the welfare of the others; and, fourthly, knowledge is a virtue.”

Afghani went on to explain each of his four points in lucid details, and I felt increasingly more enlightened as he proceeded. “Truly, I now understand a lot more about the book of God,” I said in the end. “I wonder why our maulvis don’t preach this!”

“Phew!” Pasha said with disgust, “They don’t know anything about the Quran, and the only religion they follow is to create mischief in the name of God. Indeed that is all they are capable of!”

Rumi was equally moved by the discourses of Afghani. I saw tears in his eyes. He now looked at me and said, “Recite one of your songs to us. Make us more eager, yearning for more.”

I felt highly honored, and this is a portion of the song I recited:

This rose and tulip bright,
Which seem to stay and glow,
E’ver restlessly speed on,
Much as the breeze doth blow.

The meanings new I seek
Where shall I find and sing?
The pub, the mosque, the school,
Bare, barren is their spring.

Learn from thyself, and let
That word thy being claim,
For in this monastery
Like Moses none’s aflame.

Continue to Chapter 3, Perils of Venus