Martyrs’ Day is observed on March 19th to pay homage to the Khaksars who were  injured or sacrificed their lives to free Muslims and non-Muslims from British rule.

March 19, 1940 was a black day in the history of the Indian subcontinent and cannot be forgotten. On this day, police opened fire and mercilessly injured and killed innocent Khaksars. 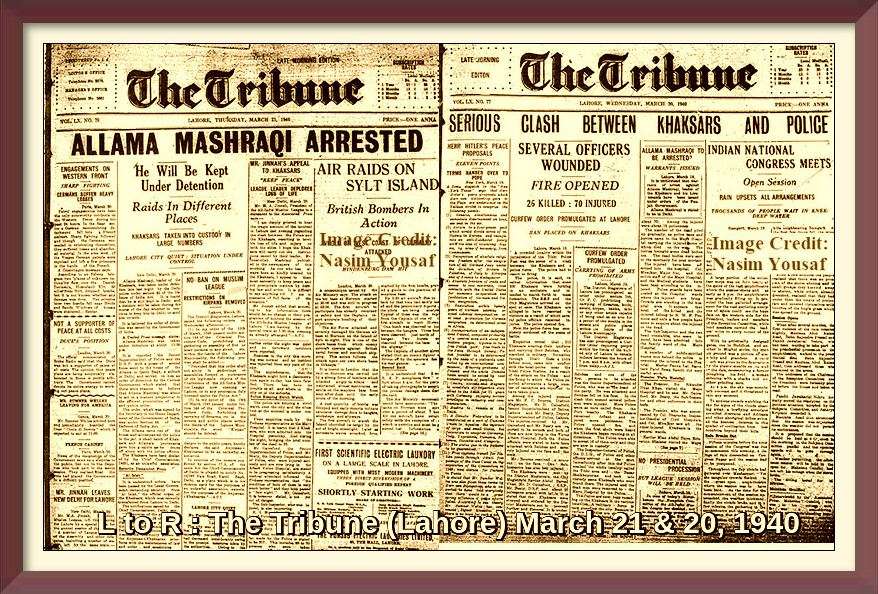 The day began with a peaceful march in Lahore by 313 Khaksar members of Allama Mashriqi’s private army. The Khaksars were marching in protest of the Government’s prohibition on their activities; the Government had imposed the ban because the British rulers considered the Khaksar Tehrik’s military style undertakings as a threat to their rule.

In order to stop the Khaksar parade, Donald Gainsford (Superintendent of Police), accompanied by P. C. D. Beaty (Deputy Superintendent of Police), F.C. Bourne (District Magistrate), a City Magistrate, and heavily armed policemen arrived on the scene. The Khaksars were ordered to immediately abandon the protest march, but they brushed aside the instruction. Not to be defied, Gainsford slapped the leader of the Khaksar contingent. This resulted in a “SERIOUS CLASH BETWEEN KHAKSARS AND POLICE” (The Tribune, March 20, 1940). The police’s indiscriminate firing took over 200 Khaksar lives (though officially reported figures falsely stated a lower number) and an even larger number were injured. According to the register of the Moharir (record keeper) of the district police, 1,620 rounds had been issued to the police at the start of the day and only 1,213 were returned, meaning 407 bullets were fired.

The dead and injured Khaksars were brutally dragged, kicked, and humiliated by the police. The slaughter was the bloodiest and most ruthless killing since the Jallianwala Bagh massacre in Amritsar by General Dyer on April 13, 1919. The people of the nation were outraged by the massacre and the treatment of the Khaksars. In Lahore, the military was called in; curfew, press censorship, and Section 144 were also imposed. The news flashed not only in British India, but was also reported by print media as well as radio in many parts of the world. Due to Government propaganda, the killed Khaksars were not declared heroes or martyrs, but rather labeled as rebels and fascists. 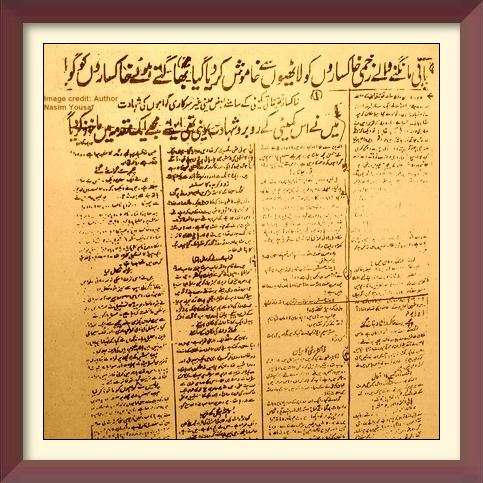 On the day of the tragedy, Mashriqi, his two sons, and a large number of Khaksars were arrested. The police and military jointly raided the Khaksar Tehrik Headquarters and Mashriqi’s adjoining house. Mashriqi’s brilliant son, Ehsanullah Khan Aslam, was injured by the police. Aslam died on May 31, 1940 due to fatal injuries; over 50,000 people gathered near Sunehri Masjid (Golden Mosque) in Lahore to attend his funeral. It is believed that this was the largest funeral for any child in the history of the region. Both men and women were emotionally charged and some of them cried hysterically or fainted. Ehsanullah Khan Aslam’s martyrdom at the age of 16 brought tremendous resentment against British rule. Mashriqi, who was in Vellore Central Jail in Madras (South India), was denied permission to travel to Lahore to take a last glimpse of his beloved son and to bury him. Also see my article entitled, “Allama Mashriqi, His Family & the Khaksars Paid the Price for Freedom.” The treatment of Mashriqi, the killing of his innocent child, and the brutal murder of the Khaksars brought new fuel to the freedom movement. 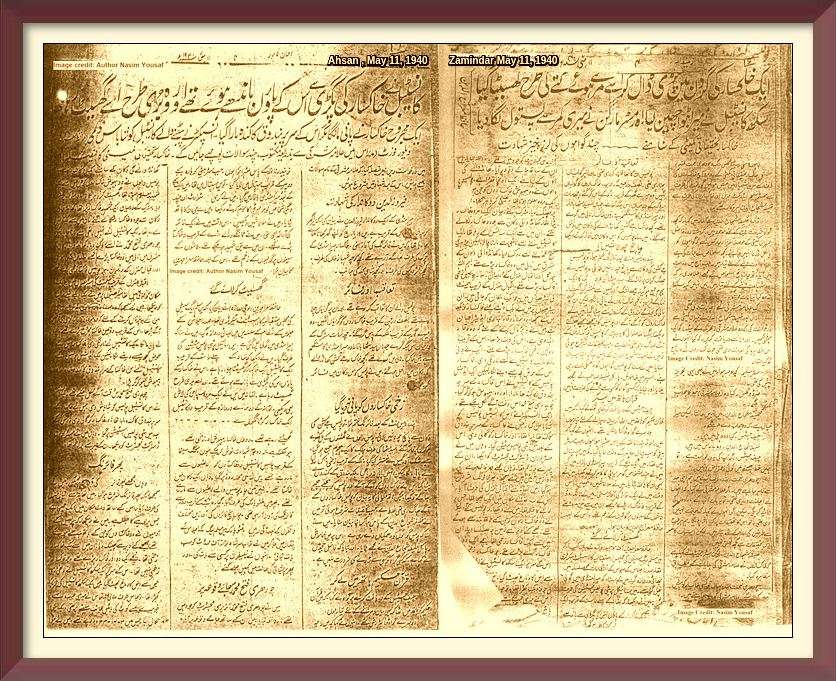 Three days after the tragedy, the All-India Muslim League held its session in Lahore (from March 22 to 24, 1940) at Minto Park (now Iqbal Park and the site of the Minar-e-Pakistan monument). The Khaksar massacre was still fresh in people’s minds and tens of thousands thronged to the venue and demanded an inquiry into the barbaric killing along with the release of Mashriqi, his sons, and the Khaksars, and the removal of the ban on the Khaksar Tehrik. As a result of the fierce public pressure, the Muslim League passed the Khaksar Resolution on March 24, 1940 (not March 23rd as is usually reported) along with the Lahore Resolution (later Pakistan Resolution). Regrettably, no information about the Khaksar Resolution is mentioned at the site of the Minar-e-Pakistan monument.

Based on intense public demand, an inquiry committee was formed by the Punjab Government to investigate the firing of the Khaksars. The committee was headed by Sir Douglas Young (Chief Justice of the Lahore High Court). Upon completion of the investigations, a report was submitted to the Government. However, the findings of the report were never released – the Government should make them public now.

The first Martyrs’ Day was observed in British India on March 19, 1941. Sir Henry Duffield Craik (Governor of Punjab) confirmed the occasion in a letter (dated April 28, 1941) to Lord Linlithgow (Viceroy of India), informing him that the Khaksars observed “Martyrs’ Day” in remembrance of the massacre on March 19, 1940 and distributed black flags.

The rulers resented honoring the martyrs. Yet from 1941 onwards, Khaksar Martyrs’ Day was solemnly and regularly observed by the Khaksar Tehrik nearly every year across British India. The somber occasion not only reminded people to remember the martyred, but greatly bolstered the freedom movement. The Khaksars’ martyrdom did not go to waste and, within seven years of the bloodbath on March 19th, two hundred years of British rule in India came to an end.

Unfortunately, after the partition of India in 1947, Jinnah’s Government confiscated Mashriqi and the Khaksar Tehrik’s extensive literature. Since Mashriqi and the Khaksars fought for a united India and did not support the creation of Pakistan, the new Pakistani Government sought to suppress their voice in history. Similarly, in India, Jawaharlal Nehru, who was Mashriqi’s classmate at Cambridge University, did not want Indians to know of Mashriqi’s leading role in the freedom movement. Thus, Nehru not only banned the Khaksar activities, but also seized Mashriqi and the Tehrik’s historical documents. The idea behind seizing Mashriqi and the Khaksars’ papers in both countries was not only to deny Mashriqi’s role in the freedom movement, but also to hide the fact that the leaders who endorsed partition had actually collaborated with the British to divide India for their own as well as British political and economic interests. This suppression of history continues in both countries even today.

With these actions, Pakistan and India continue to teach a distorted history and only recognize those leaders who worked with the British rulers. I have demanded via open letters (available on the internet) to Pakistan, India, and the United Kingdom’s Governments to declassify Mashriqi and the Khaksar Tehrik’s materials (confiscated during the pre- and post partition era), but thus far nothing has come from this effort. Although some files from the Government of British India are available on the Khaksar Tehrik, they only represent the British Government’s version of events. Writers have used this one-sided view of history to tarnish Mashriqi’s image.

Despite no official recognition in Pakistan and India, Mashriqi’s supporters and the Khaksar Tehrik in Pakistan have continued to observe the Khaksar Martyrs’ Day for decades. Each year, a ceremony is held at the Khaksar Tehrik Headquarters at 34-Zialdar Road in Icchra, Lahore (where Mashriqi is buried). This year, the Khaksar Tehrik has already announced that the day will be observed across Pakistan. The day will include speeches to remember the departed souls and their contributions toward freedom shall also be shared with the attendees. Mashriqi’s supporters and the Khaksars’ shall visit Miani Sahib graveyard to offer Fateh and lay flowers on the graves of martyred Khaksars. In other cities of Pakistan, apart from paying homage, prayers for the departed souls shall also be held.

These martyrs deserve to be remembered, as they sacrificed their lives for the freedom of Muslims, Hindus, Sikhs, and people of other faiths living in British India and for their future generations. Historically, freedom from strong and oppressive rule does not come via constitutional fights, table talks or other passive methods alone; it demands constant resistance subverting activities, and deep sacrifices such as those made by the Khaksars. This was also the case in the freedom of British India. 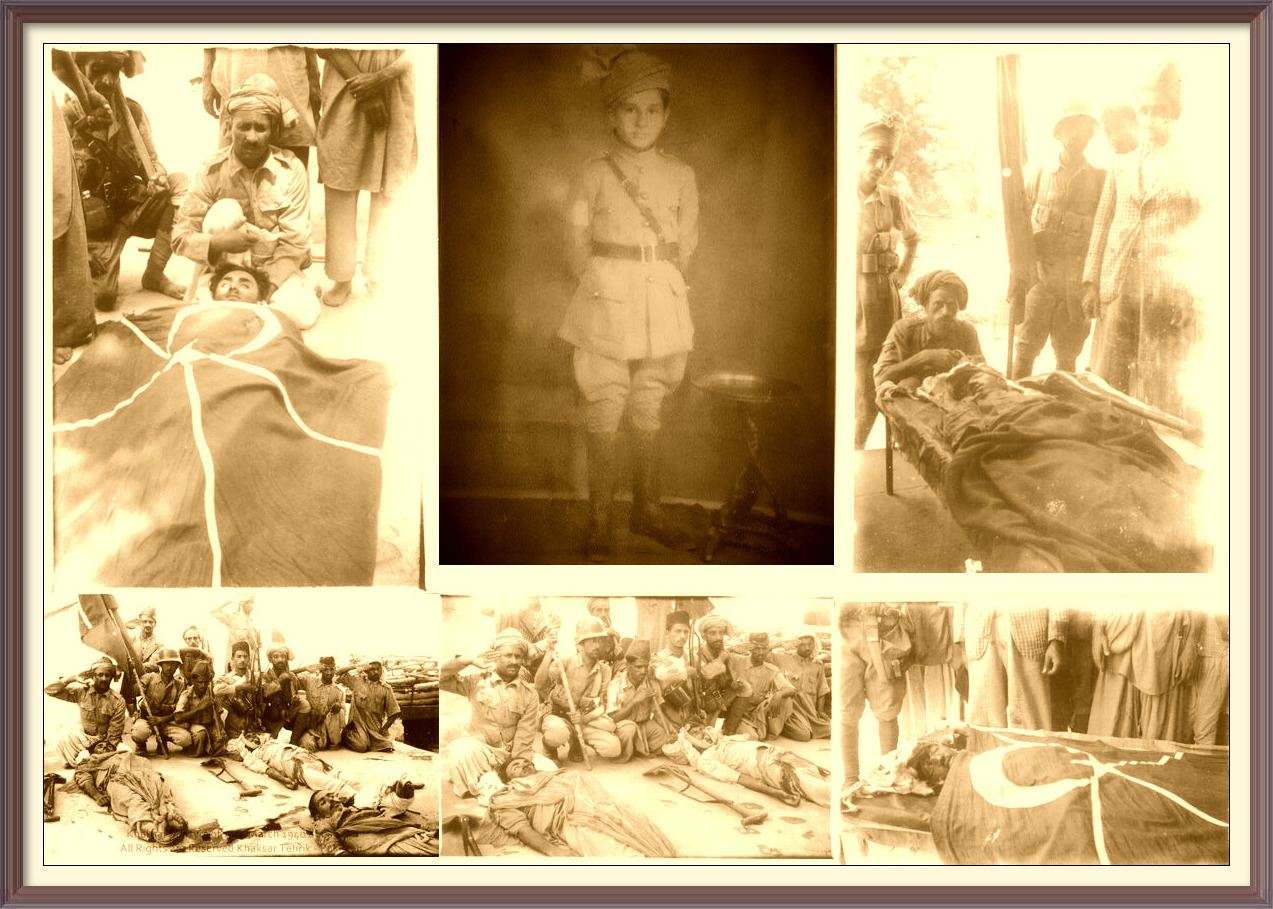 To conclude, people of the sub-continent should remember that they have freedom today as a result of the Khaksars’ martyrdom and unwavering defiance of the colonial rulers. The Governments of Bangladesh, India, and Pakistan should officially declare March 19th “Khaksar Martyrs Day.” In addition, these Governments should issue instructions to museums to include artifacts from Mashriqi and the Khaksar Tehrik’s fight for freedom. The authorities in Pakistan should also ensure that the Khaksar Resolution is inscribed at the Minar-e-Pakistan site and a memorial is built at the location where the Khaksars were ruthlessly injured or killed. The nations must honor the Khaksar heroes of the past, whose sacrifices brought freedom to the region and cannot be erased from history.

Nasim Yousaf, a grandson of Allama Mashriqi, is a researcher based in the USA. He has presented papers at academic conferences, published many books, compiled a digital version of his historic works (“Al-Islah” weekly journal), and contributed articles to prestigious and peer-reviewed encyclopedias and academic journals. His works have been published in newspapers in both the East and West.