The wonderful world of Mars

I closed my eyes under those waters and in a blink I found myself taken to yet another world. This was Mars. It was positioned in a different dimension of time and space, but the sun that provides light and warmth to the earth had created a series of day and night here as well. 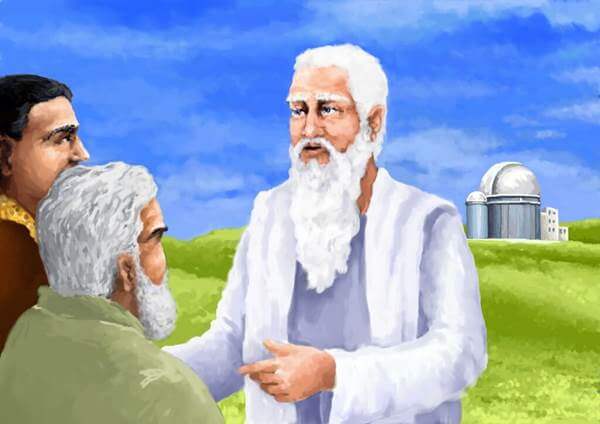 Our life adjusts itself to the conduct of time, and hence I began to understand the world of Mars. There, every day dawns with a reason to be happy. People don’t grow old with the progression of time but rather continue to radiate a glow – which is used by the day to light up the atmosphere. Life on that planet provides energy to the night and day, and therefore I was tempted to discover the essence of life and get acquainted with its style because the world is there as long as the life is.

I saw a meadow. In that meadow there was a tall observatory. Its telescope had the highest star in its grip. Watching the immense dissimilarity between the two worlds I searched for the edge of this vast world and then my eyes were taken towards the sky.

Rumi, with his sharp insight, asked me to tour the land, see its splendor and gain knowledge about it. “This world is like our world in many ways,” said he. “It is decorated with a large selection of colors and smells; it has cities, population and dwellings. The inhabitants of Mars are skilled like the Europeans, but have a greater knowledge of body and soul. Their understanding of time and space far surpasses ours. While our hearts are captivated and controlled by our bodies, the bodies of the Martians are contained in their hearts. Now, you must know that all happiness depends on life and not on body. The concept of existence on earth has two constituents: the body, which can be seen; and the soul, which cannot be seen. This division doesn’t exist in the Martian world and they enjoy a unity of thought. When someone is about to die here the passion of departure gives him or her vigor to announce the death two days and the death occurs merely by the absorption of the body into the soul. But this concept is above the reach of our grasp because unlike the Martians, our bodies rear our souls. We must avail the rare opportunity of making a brief stopover in this world.”

An old man who had a white beard and a lifetime spent in search of wisdom and knowledge, came out of the observatory I have described already. He was quick witted and wore a dress similar to that of a high priest. He was aged and tall, and his face glowed like that of the Turks. He was familiar to all disciplines of knowledge and his eyes reflected profound judgment. He looked at us, and his face lit up as he spoke to us in Persian and told us the story of their amazing progress. He told me that there was a pious Martian in the time of the Prophet Muhammad, and he decided to travel to the Earth. He glided across the atmosphere of all existence and landed in the deserts of Hijaz. There, he wrote down all he saw in the East and the West and came back. “I have also gone as far as Iran and the lands of the Englishmen,” the Martian astronomer told us. “I have scaled the lands of the Nile and the Ganges. I have gone to America, Japan and China to explore metals and minerals. The deeds of the humans are not unknown to me though they are unaware of our existence.”

“I’m from the heavens and my companion, from the Earth,” said Rumi. “He’s a free man and I have nicknamed him the Living Stream. We have come to your world in search for new expressions of life, and fresh challenges. Would you kindly show us around?”

“This is the surrounding area of Barkhiya, our first predecessor,” said the astronomer. “He was the father of all the people on Mars, just as Adam was on Earth. Framurz, the Spirit of Evil, also tried to tempt Barkhiya by promising him a world that was more majestic than the heavens where God had kept him. ‘That world is better than all other worlds,’ said Framurz. ‘It is a world free of restrictions, a world without God, holy book, prophets or Gabriel.’ Barkhia wasn’t tempted, and asked Framurz to go alone to the world he had just described. Hence the Spirit of Evil couldn’t trick our predecessor, whom God rewarded by creating this other world for him. It is called Marghdeen. Let’s take a look at its splendor.”

The city of Marghdeen is a magnificent place with tall buildings. Its people are beautiful, selfless and simple; they speak a language that sounds melodious to the ears. They are not after material goods; rather they are the guardians of knowledge and derive wealth from their sound judgment. The sole purpose of knowledge and skill in that world is to help improve the life. Currency is unknown, and temperaments are not to be governed by machines that blacken the sky with their smoke. The farmers are hardworking and contented – there are no landlords to plunder their harvest, and the tillers of the land enjoy the entire fruit of their labor. Learning and wisdom don’t flourish on deceit and hence there is neither army, nor law keepers are needed, because there is no crime in Marghdeen. The marketplace is free from the noisy shouts and heartrending cries of the beggars.

“In this world there is no beggar,” said the Martian Astronomer, “Nor anyone is poor; no slave, no master – no ruler and thus none dominated.”

I said, “Being born a beggar or a destitute, to be ruled or suppressed, is all by the decree of God. He alone is the architect of destiny. Destiny cannot be improved by reasoning.”

“If you are suffering at the hands of destiny,” replied the Martian astronomer with a visible anger, “It is not unfair to ask God for a new one. He has no shortage of destinies for you. Failure to understand the mystical significance of destiny has led the inhabitants of the Earth to lose their identities. Here is a hint to the secret of destiny: change yourself and your destiny will change with you. If you are dust, you shall be scattered by the wind. But if you become solid as a rock, you can break the glass. If you are dewdrop, then you are destined to fall but if you are an ocean, then you will remain. To you, faith means conformity to others while your imagination remains confined because you do not conform to yourself. Shame on the faith that serves like an addiction to opium!”

Then he paused, and added, “A gem is a gem as long as you think it is valuable, otherwise it is just a stone. The world will shape itself according to your perception of it. The heavens and the earth too will adjust.”

I scaled myriad battlements and cultures to reach a vast piece of land situated at the edge of the city. The ground was packed with men and women and in the middle stood a tall woman. Despite her radiant face, she lacked the spiritual glow, her speech was meaningless and her eyes dry. She was unaware of the joys of love and desire. She was bereft of youthful zeal and hence she was like a wagtail discarded by the guardians of love. A wise Martian astrologer told us that she’s not from amongst the Martians. She was simple and lacked slyness but Framurz, the Spirit of Evil, abducted her from Europe and after perfecting her in the office of a prophetess, he put her amongst the Martians. She then said that she had descended from the heavens and her call is the last word of all. She talks about the status of men and women and talks openly about the secrets of the body. 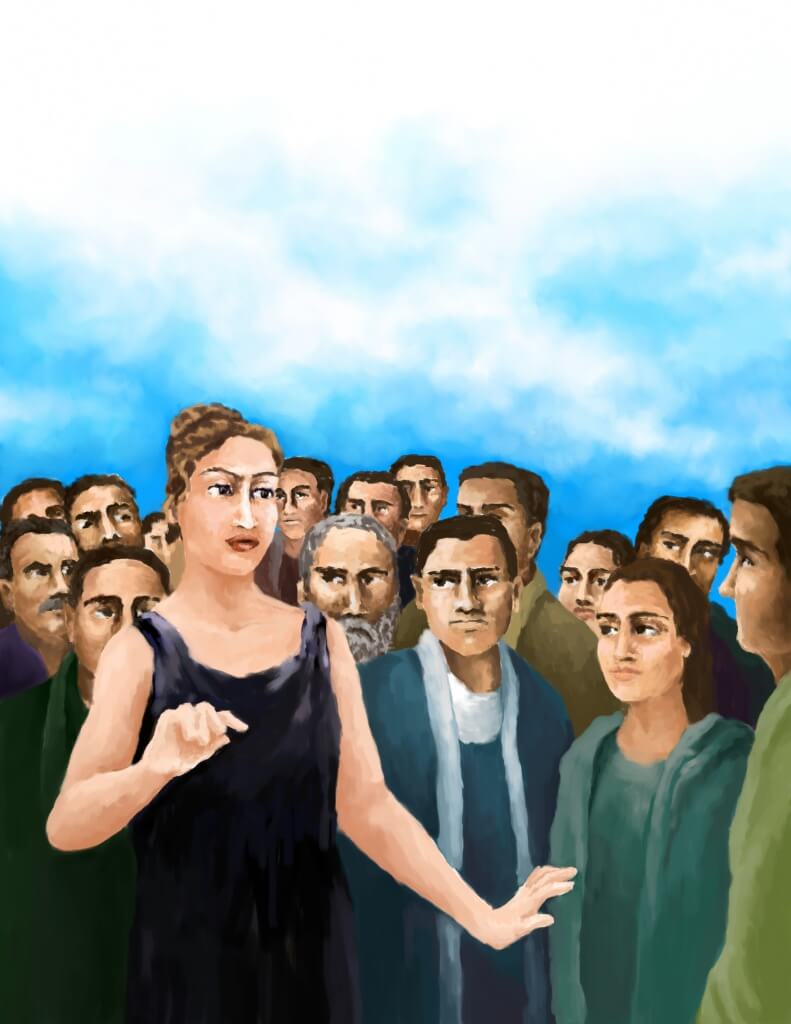 As I listened to her, I heard her saying, “Lo Women! Lo mothers and sisters! How long will you keep living your life like a beloved? Friendship with a man rears misery for life, the union is fatal and distancing yourself from him is gratifying. He is a trickster, avoid this trouble and do not let his venom infect your blood. A mother’s face turns pale at the time she gives birth, how wonderful life would be if you were free from the interaction of the bodies!”

Rumi said to me, “See the outcome of a profane civilization. Love is the only divine code of life. Religion is the basis of civilization, and love, the foundation of religion. Love, apparently is heart burning and resembles fire but essentially it contains the light of God. The inherent energy of love and its zeal helps prosper art and literature. Religion is incomplete without the etiquettes of love. So discover religion in the company of the masters of love.”

Continue to Chapter 5. Around Jupiter