One of the most surging conflicts in the history of the world, in-fact arguably the most ghastly one, is the Rohingya crisis that eerily looms in the minds of the aware yet presumptions tail over their insights and with the passage of time, the story of the hapless is evaporated into thin air. This is primarily attributed to the intermittent historical timeline of the events that make almost generational gaps which are quite significant in making a indelible dent in the conscience of the people. The premise of the tyranny is outright banal, so ironic of the ill-omened fate of this ever-changing world, the dissension tails back two centuries which kick started the process of ‘Ethnic Cleansing’ by the Myanmar forces, gruelling the muslim natives beyond human limits, ultimately nudging them to flee their very own houses or get slaughtered at the hands of the inhuman mercenaries. 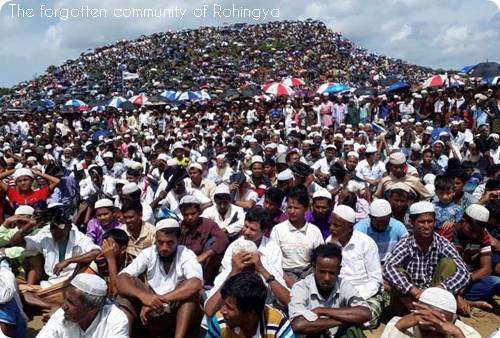 To dig deep in the historical roots of the discord; we glimpse back to the colonial era of the 1800’s when the dynamics of the Indian Subcontinent stood drastically different compared to modern times. Myanmar (Then Burma) was the epicentre of the Buddhist monks; community that traded with the Indian traders of Assam and Bux and even peddled off goods to Bengal. To expand their control, the British regime decided to emigrate mounds of Indian and Bengali natives into the Rakhline state of Myanmar, much to the dismay of the extremist Buddhist community. Over the following 50 years, the muslim population of the region doubled exponentially yet their conditions got worse.

In the World War II debacle, the dissent was clearly visible as the muslim populace advocated the British while the Burmese Buddhists championed the Japanese regime; the outcome is as clear as daylight. The last breaking point came into being just a year before the independence of Myanmar, when in 1947, the notorious separation of India and Pakistan sent rampant refugees over the south-east borders of Bengal, into Myanmar, further pushing the nerves in the vicinity. Myanmar emerged as a sovereign state in 1948 which derisively took away the last shred of independence the muslim community ever had within the country.

Muslim citizenry has ever since been deprived of the basic human rights despite their constant plea for equality that has gone unheeded for the past 70 years. The Myanmar government has denied any representation to the muslim minority that stands currently at half a million individuals; they are not regarded as the legal and rightful citizens of the country despite their centurial lineage. Some of the silent atrocities have been so discreet that they stand out as the obvious due to the uncanny gap in the wretched timeline of the Rohingya Muslims yet cannot be backed by any substantiated evidence. The prejudicial policies of the Myanmar government turned more focused and biased in the 1970’s which involved brutal murdering of the innocent muslims, bestial raping spree over helpless girls in the community and incinerating their houses along with their family members in front of their very eyes, forcing them to flee their inevitable doom.

Two major migrations have pinned the historical graph; one in 1978 and other followed just 12 years later in 1990, the exodus collectively relocating close to 200,000 Rohingya into borders of neighbouring country like Bangladesh, Thailand, India and Indonesia. The savage outlook of the Burmese Buddhists, however, has only picked up pace; refusing to recognise the minority as such and treating them as rebels. Rohingya were not relented in census polls of 2014 nor in the general elections where a candidate pertaining to their community was far fetched, they were not even allowed to cast their vote. The military of Myanmar, fabled by the title Tatmadaw has carried out numerous ethical cleaning excursions to date; the highlighted event that shook the world into awareness was the religious violence of 2012 when close to 200 Rohingya were viciously dismembered to their death and close to 150,000 were displaced, smattered, rendered homeless.

Today, the ground reality has still not changed to say the least. The sinister vibes of the 2017 crackdown still sends jitters. The world, however, has evolved its perception over the course of the blood-doused story of Rohingya. Although the official refugee status of the Rohingya was taken away after a mass influx of refugees in Bangladesh in 1992; the region of Cox Bazar still houses close to a million people: natives and refugees combined. Even the International Court of Justice (ICJ) of United Nations unanimously ruled the situation last month, as inhuman genocide and ordained the government to take austere measures to protect the Rohingya community. Although the claim was rejected by the Myanmar officials, denying targeting the civilians but the militant groups, the decision did put a dent on their unrestrained savagery and has sparked hope in many helpless Rohingya outspread in the land of doom.

With atrocities multiplying by the day, exemplifying the recent genocide of 6700 Rohingya including 730 infants just at a suspicion of attacking the police posts that never even recorded any fatalities, with continuous slimming of the basic resources in regions of Kulupalang and Mayapara, the major dwelling territory of the Rohingya refugees in Bangladesh and even the incidents of hapless accidents in the desperate transit of Rohingya, like the recent capsizing of the boat carrying 130 Rohingyas killing 15 while only 40 surviving; it is imperative that the living condition in apparent shambles should be restored and equal rights should at least flow if not the justice for the genocide that will continue to mar the minds of the future generations of innocent Rohingya.