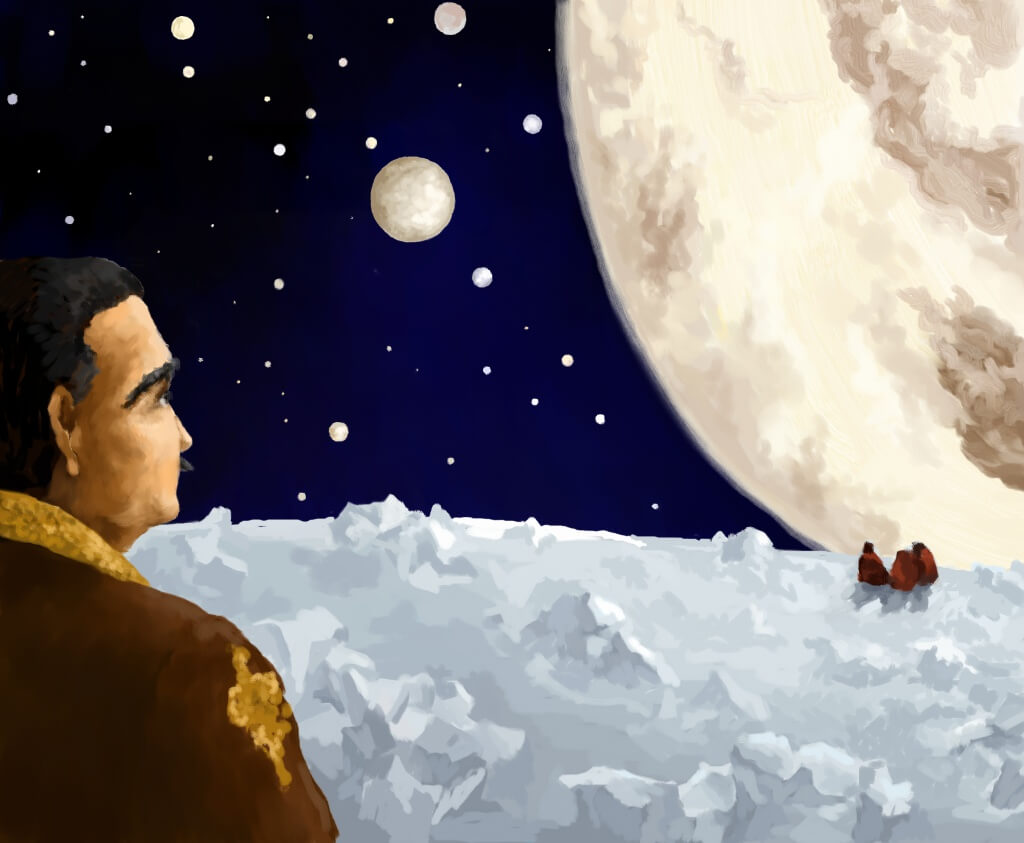 Next we met such spirits who had chosen eternal voyage over taking residence in the heavens!

I love my inspired heart that shows me a new solitude always. Each time I think of stopping, it says to me, “Rise! The oceans are of no merit for one who reaches unto oneself. O traveler! The signs of God have no limit, then why do you think the path will come to an end?” And hence I was now scaling the skies in search of new spectacles after the blessed Rumi who had put in me the passion of his spirit. We arrived at the outskirts of Jupiter.

Jupiter was an incomplete planet orbited by several fast paced moons. Its grapes hadn’t yielded wine yet, nor had its soil given rise to love and yearning. The moons lit up the skies at midnight and imparted light as if it were daytime. The breeze there was neither warm nor cold. I looked up and the stars in the sky appeared so close that I nearly lost my senses out of fear — near, far, late and early all got muddled up.

Presently I saw three holy spirits draped in red shawls. Their faces were radiating with the fire in their hearts that could melt stones. They were basking in the pleasure of that first day of Creation, when God had asked all souls, “Am I not your Lord?” And they had replied, “Indeed, you are!” All three were singing songs, and seemed to be intoxicated by their own music.

Rumi said to me, “Don’t be lost like this. Derive life from the passion of their voices. The voices of Ghalib, Hallaj and this Iranian lady have brought about an uproar; they provide permanence to the soul because they have derived passion from the heart of this universe.”

Mix with the ones who throb
And heave with surging life,
But e’er escape the one
Who keeps away from strife.

I now listened to Ghalib. He was singing:

Law shall not cow us down
With gallows or with jail,
To buy off our path
King’s glittering gold shall fail.

The ‘Iranian Lady,’ mentioned by Rumi was none other than Qurat-ul-Ain Tahira, the martyr. She was singing:

To sight thy loveliness
I wander like the breeze,
On every path and street,
From every castle and door
I go forth, I ne’er cease.

The excitement of these compassionate travelers stirred a new fervor in my soul. Old confusions came back to my mind, rising up like a violent storm that crushed the sea of my thought. “Don’t waste time,” said Rumi, “How long are you going to remain a prisoner of your thoughts?”

I now asked Hallaj why he and the other two spirits declined paradise, and he replied that eternal voyage itself was the best paradise for such free spirits. I then asked him some more questions, including one that had always intrigued me. As you know, Hallaj was crucified for saying, “Ana al-Haq,” which had the double meaning of, “I am the Truth,” and “I am God.” I always wanted to find out what was actually meant by this statement, and now I got the opportunity to ask the mystic himself. 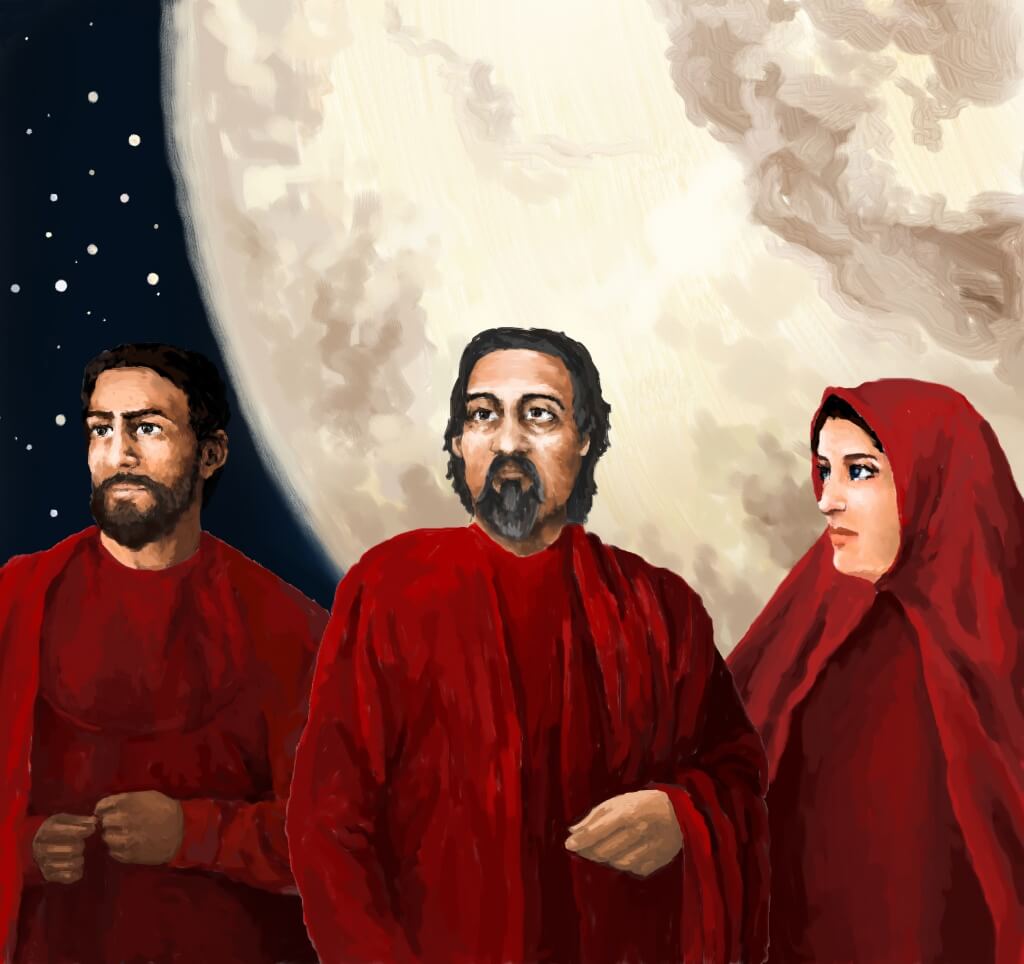 “I saw a people who were turning away from life, so I decided to wake them up,” said Hallaj. “They said they believed in God and yet they didn’t believe in themselves. How can you have faith in the Almighty without having faith in yourself?”

Tahira interrupted us at this point. “New worlds are born from those whose love surpasses reason,” she said to me. “The martyr hides himself in the conscience of the age.”

I had a burning question for Ghalib as well. In the world below, people were debating over one of his couplets. It mentioned that the bulbul, which loves flowers, is colorful like the flowers themselves whereas the nightingale, which also loves flowers, looks like a handful of ashes. Now I requested Ghalib for explanation, and he answered, “Love has a different impact on each soul. It may add colors to you or it may burn you to death. It depends on how you take it.”

I then asked him if there were prophets for every world, and he replied that the Mercy of the Worlds existed wherever there was life in the universe. Since the Mercy of the Worlds (or Rahmatu lil Alimeen) was the title of our Holy Prophet, I asked Ghalib to explain it further but he hesitated. Seeing the reluctance of this gentleman, Hallaj spoke up boldly, “The Prophet was the king of all the worlds and yet he called himself the slave of God, or Abduhu. Understand very well that the slave of God is not separate from God Himself.”

“Tell me,” I asked Hallaj, “How can one see God in the world.” “Carve His image on your soul first,” Hallaj answered, “Then carve it on the world. Then you will see Him wherever you look. You can carve his image on the world through love as well as by force, but love is far better, because God is more visible in love than in force.”

I then asked the whereabouts of Satan, and made the mistake of calling him a loser. Hallaj immediately asked me to watch my words. “He is the Lord of Separation,” said the mystic, “It was only through him that we the humans were able to see that the rewards are pleasurable when they are earned through suffering. We don’t know his secrets because he is much senior to us in love and service of God.”

I was finding such delight in the company of these impassioned souls that I requested them to stay with me a little longer but they didn’t agree – they must move on, they said. As they left, I closed my eyes so I may transfer them from my eyes to the heart.

Suddenly, the world appeared dark. The darkness spread far and wide. A blaze then appeared in the night and out of it came an aged man. He was dressed in deep black attire and was surrounded by convoluted smoke. Rumi told me that he was Satan, or Iblees, the master of those who were familiar with the pain of parting. He was passion from head to toe and his cup was filled not with wine but with his own blood. 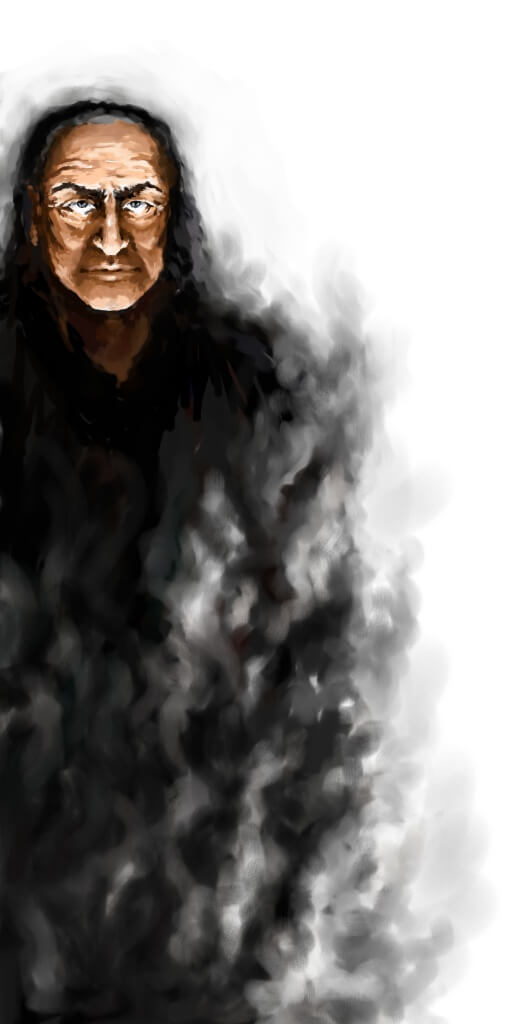 I figured that Satan was old, of grave temperament, and spoke very little. When he looked, he could see the soul right there in the body. He was intoxicated, but he was also a scholar, a philosopher, a mystic and an ascetic. His nature was unfettered by the taste of union. To him, worship meant distancing himself from God and he accomplished this by refusing to stoop before Adam. See his hardships and his perseverance: he is steadfast in the war of good and evil even now.

My soul trembled inside my body and I let out a deep sigh. He looked at me with half opened eyes and said, “Who else is complete in his deeds but me? I do not even take a break on Fridays. I don’t have angels or servants nor do I require prophets to carry my revelation, and yet I have won the souls. O ignorant one! I set forth the mechanism of good and evil by refusing to bow. I felt the pain of Adam and endured God’s displeasure for his sake. I uncovered my vices so that you may experience the joy of making your own decisions. Why don’t you pull me out of my misfortune? Be indifferent to my sweetness and bitterness so that my conduct is bad no more. A hunter thrives only because of his prey; there cant be any hunters if the target is too smart.”

I said to him, “Why are you treading on the path of separation? Indeed, God doesn’t like separations.”

“The rage of dissociation grants order to life,” he said. “Alas! Separation is so intoxicating. I cannot talk of unity because if I unite, neither of us would be the same!”

I noticed that his heart experienced acute pain when he talked about union with God. He rolled and tossed in his own smoke for sometime and eventually was lost in it. Then I heard a voice crying out from the smoke, “O Lord of the good and evil!” Called out the voice from the smoke. “I have been spoiled by the humans. They never disobey me. They have closed their eyes on themselves and have failed to discover what is within them. O Lord! I seek shelter from obedient humans. Remember my past worshipping and give me a strong enemy, one who has a vision. Take away from me these dolls of clay for I don’t look good playing with them at my age. O God! Give me someone who can refuse me and dominate me and whose mere sight could make me tremble. O God! I yearn for a taste of defeat.”