Plato: In words of Dr. Allama Muhammad Iqbal: The Story of Sheep and the Lion 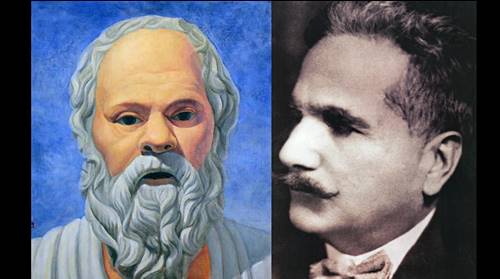 Platon Plato was born in Athens in Greece in 427 B.C. He was a pupil of Socrates. Dismayed at the inequities of the Athenian tyranny, and later at the execution of his teacher Socrates, he turned toward philosophy in search of an alternative to the unstable and unjust public life of the time.

Plato visited Egypt, and Sicily. He also visited Italy. On return to Athens he founded the Academy at which discussion and research were stimulated in mathematical and astronomical fields, in practical legislation, in the art of definitions, and in natural history.

According to tradition, Plato was originally called Aristotle, but he was later called Plato because of his wide forehead, his robust physique and the quality of his writings. He died in 348 B.C.
In ‘Asrar-i-Khudi’, Iqbal is critical of Plato’s passivist policy of converting the Hons into sheep. Iqbal says:

“ Plato, the prime ascetic and sage Was one of that ancient flock of sheep.

He was so fascinated by the invisible,

That to him, hand, eye, and ear were of no account.

He said To die is the secret of life,

And the candle is glorified by being put out!

His philosophy dominates our thinking But his cup lulls us to sleep,

And makes us strangers to the world.

He is a sheep in man’s clothing.

And his thought has made the Sufi follow the wrong path.

His intellect soared to the heaven

And he called the world of phenomena a phantom.

His role was to dissolve the ingredients of life.

And to cut at the roots of the beautiful tree of life.

The thought of Plato labelled loss as profit His philosophy declared that being is not-being.

His intellect slumbered and produced a dream;

And his mind’s eye saw a mirage.

As he lacked the urge for action

He was attracted by the not-being instead of the being.

He overlooked the material universe and was lost in the Invisible.

Its gazelles have no grace of movement.

Its partridges are denied the dalntllness of walking.

Its birds have no breath in their breasts,

Its dew drops are unable to quiver.

Its seed does noc have the capacity to grow.

Its moths do not know how to flutter.

The poor ascetic had no way to suggest but flight from the world. He could not endure the hustle and bustle of the world.

His fantasy is sunk in the jar of heaven.

I do not know whether it is the dregs.

Or the brick to be placed under the wine Jar.

By the intoxication of his thoughts the people were poisoned. They took to sleep, and lost the power of action.”