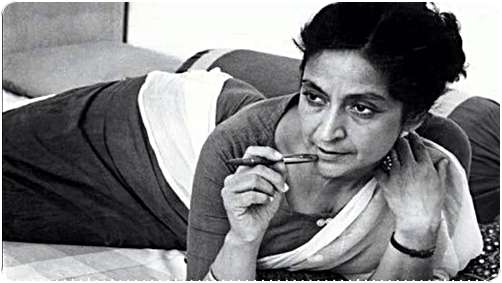 Amrita Pritam always reminded me of a re-incarnation of Waris Shah. Both were Punjabi Poets pare excellence, both preached non-violence, and both were one of the few celebrated literary giants, which are loved by people regardless of race, creed and religion at both sides of Indo-Pak border.
It is not surprise that her both famous poem is an Ode to Waris Shah “Aj Aakhaan Waris Shah Nu (Today I invoke Waris Shah – “Ode to Waris Shah”)” an tribute to the 18th-century Punjabi poet. Amrita asks Waris Shah to speak from his grave as the land of Punjab bleeds at hands of its own people during the partition of India.
Amrita also was famed for her candid autobiography “The Revenue Stamp,” English version of “Raseedi Ticket.”. She always had a soft corner for Pakistan, which she never shied away from confessing in her writings. Pakistan was the land of her birth, since she was born and raised in Gujranwala and Lahore, before migrating to India in 1947. It was a separation from the land she adored and friends she cherished. In her Interview with Shah A Siddiqui, a former Pakistani Diplomat, she recalled little alley way and streets of Lahore and her friends including Sajjad Haider and Faiz Ahmed Faiz.
She was a very broad minded lady and did not hesitate to disclose her friendship with laureate personalities such as Sahir Ludhyanvi, and Imroz. She also mentioned about her deep feelings toward Sahir in her biography. She remembered Sajjad Haider, her very best real friend from Pakistan. In her autobiography “The Revenue Stamp”  she writes:

“Sajjad was in Delhi for a good eighteen days. Nights he spent at Marina Hotel, days at   my house. This was the first time in my life I realized I had a friend in the world, a friend in every sense of the word. For the first time ever it dawned on me that a poem does not need to be created out of the passion of love. It can waft across the calm seas of friendship. At parting, I wrote:

Buy me a pair of wings, Stranger—
Or come and live with me”

During a cultural get together in London, she met with Fehmida Riaz,  Shahab Qizilbash, Saqi Farooqi, , Abdullah Hussain  and prominent classical singers Nazakat Ali and Salamat Ali.
Shah A Siddiqui mentions that she was very hospitable and courteous by nature, treating the guest with delicious desserts, samosa, and coffee. She walked us to the gate to say good bye and shook hands. Her novel Pinjar is considered as one of the best novels of Punjabi language and has been subject to movie starring Urmila Matondkar, Manoj Bajpai and Sanjay Suri.