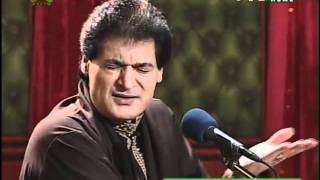 I was quite shocked to learn, relatively late, last night that the Pakistani musician Ustad Asad Amanat Ali Khan had died a few days ago in London of a heart attack.
Apart from the sadness at the demise of an artist from such a great musical tradition (his great-grandfather, Ustad Ali Bux Khan, founded the legendary Patiala Gharana (“School”) of Hindustani music; his father and uncle were famous classical singers, especially his illustrious father, Ustad Amanat Ali Khan, who also sang ghazals in a classical style and is for ever immortalised for his rendition of Ibn Insha’s, “Insha Ji utho, ab kooch karo”) I was particularly saddened that he died at such a young age. In fact he has turned out to be older than I imagined, being in his mid-fifties but I met him when he came to Oxford about six or seven years ago or so and he looked very young. Obviously he must have aged dramatically in the last few years.

I remember going to the event at the Asian Cultural Centre, a small little space, and sitting quite near the front of the stage. It was only a small hall, with a maximum capacity of probably a hundred or so but this made the atmosphere more intimate. Still, it was jam packed and many people were standing up who couldn’t get seats.

I remember he was wearing a silky shalwar kurta with a scarf (chadar) thrown over his shoulder, looking very smart and traditional. The fairness of his skin was also a bit of a surprise as he didn’t appear so fair on TV!

Because there weren’t so many people the atmosphere was very relaxed and he interacted a lot with the audience, singing a few of his own songs and then mostly requests. I cannot remember all the songs he sang except for the last one which was his father’s famous ghazal, Insha ji ab utho, ab kooch karo. He said that he would sing that ghazal last as ’after singing that ghazal I cannot sing anything else’. I remember even when he did sing it he began to cry and how to stop a couple of times to compose himself.

He started the evening, if I recall correctly, singing some naat as it was requested which I found surprising from a ghazal singer but he gave the impression of being quite religious saying the Arabic blessing after the Prophet’s name every time it was mentioned by anyone. I remember some of the older members of the audience spoke with him at length about his father.

He also sang some Punjabi ghazals –one was superb but although I really liked it then I have forgotten the title of it now. He was also requested to sing a ghazal of Ghalib’s and I also believe he sang Dam a Dam Must Qalandar before finishing the evening with Insha Ji where everyone got emotional; He began to cry and, if I recall correctly, an old man in the audience in the front row–one of the organisers I believe too–went up to him and consoled him.

It was the only time I met him but the memory never left me. When I heard his younger brother had started a band called Fuzon I made sure I heard it only for the sake of Asad. He had a very soothing voice and though I am not an expert in classical music he seemed to have good command of its nuances.

How apt the lyrics to his father’s ghazal (which he also sang very well) were and how prophetic:

Insha, get up, lets go now; why give your heart to this city?

What has a madman to do with peace?

What place does a dervish have in this world?
Who would have thought that less than a decade later he’d be dead? May Allah grant him a place in paradise. Amen.