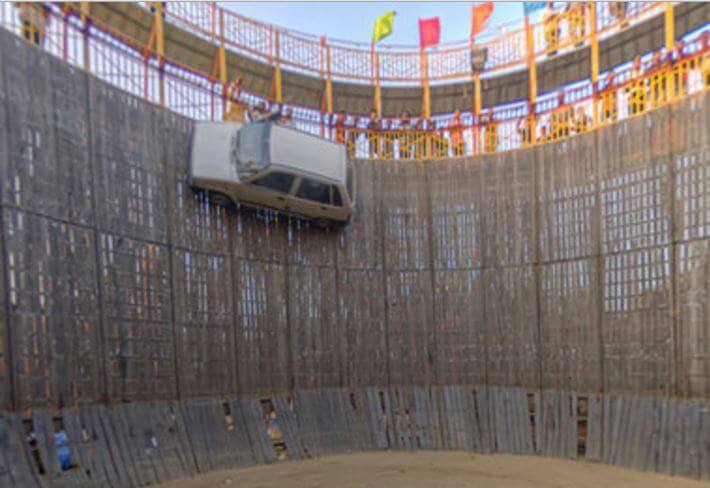 As he lay dying, Maulvi Assadullah sensed that the angels on his shoulders had grown impatient and were already sorting out his deeds. The sense sent his mind spiraling back to search for all his actions. He furiously attacked his non-existent memory searching the archives for some clue indicating

the possible judgement awaiting him in the hereafter. So complete had his amnesia been however, it was an exercise that only further heightened his anxiety. The only event the ‘Lion of God’ kept bumping into was the one he wished he had forgotten….

It was not a day like any other. Rozaiba had received a beautiful new red One hundred rupee note from his Mamu-uncle as a compensation for the two previous Eid gifts not presented since the Mamu-uncle had been absent from the country. The 8 year-old Rozaiba was naturally overwhelmed by the enormous amount of wealth never seen before. It was sufficient to purchase the world with. “Ama, jab Allah daita hai to chappar pharr kay daita hai”, the boy shouted to his mom as he ran out the door. She scolded her brother for the present and claimed the boy would only waste the money saying: ae thay khou vich sutan valee gal hoi (‘it’s like throwing it in the well’).

As it happened, that very day a whole carnival had arrived at the village to celebrate the ‘urs’ of Baba Pir. It was called ‘Baba Pir da mela’. Present were dozens of eunuchs (haijrra- who were also part-time prostitutes), kabaddi players as well as a list of never-seen-before sights of deformed humans such as a female with a lion’s tail and other organisms with cross-over body parts of multiple mammals on display inside tents. There were billboards with pictures outside the tents resembling what to expect inside. It was all an effective method to lure the persistence of kids of non-complying and cynical parents. There were also hundreds of merchants in makeshift stalls loaded with the most unnecessary of goods. Yet at the end of the festival, they would leave happy promising to come back next year.

All had shown up to the normally inconspicuous dusty village to help in commemorating the anniversary of the 16th century saint Baba Pir (among the saint’s many earlier admirers was Emperor Babur, thus testifying to the divine qualifications of the saint). Among the attractions, perhaps the most awe-inspiring one was the infamous ‘Maut ka Kunwan’- The Well of Death. It was a haphazardly built structure about 30 feet high shaped like an above-the-ground well on whose inside walls a motorcyclist seated with an eunuch rides in circles all the way to the top. At the top of the structure is a ramp on which stand spectators witnessing the dare-devil stunt and hand out a few rupees to the passenger eunuch as the vehicle passes by them.

On this day, Rozaiba was 100 rupees rich. The mela offered the first step in practicing seemingly limitless purchasing power. More than anything else he wanted to see the danger-inspiring ‘Maut ka Kunwan’. As Rozaiba got to the upper ramp to witness the spectacle, present there were a number of other people. Among them were a few hormonally charged teenagers who were snickering and giggling at the eunuch’s down below. The eunuch’s (there were two, Sharmelee and Banu) were playing with their long hair in an inviting manner to entice local eyes. Now and then, Banu would smilingly pick up the notes dropped by the spectators thus sending the boys into blushes of conquest of some sort accompanied by more giggles. Also present was a culture-conscious photographer-journalist who was there to report the annual extravaganza to the national Urdu dailies. While fixing his camera, he was speaking to a man besides him about the importance of highlighting the country’s cultural heritage. He felt it his duty that the event be given the deserving coverage as the government had ignored the rich and vibrant culture for the sake of political expediency and short-sighted interests. Unfortunately the man he was speaking to was a mentally retarded 12 year old whose body had overtaken the normal increments of time. Either he was a 12 year-old with a man’s body (beard and all), or a man with a 12 year-old brain. So accustomed had people of the village become to the orphan, they forgot which it was. In any case, the boy/man was more interested in the camera the photographer was adjusting than the patriotic chatter.

But an even more passionate person was on the ramp that day. Maulvi Assadullah’s passions were of the temperamental kind. Most of the students whom he taught to recite the holy book, had vanished and his common sense told him they were most probably out enjoying themselves at the mela instead. Assadullah had chosen the ‘Well of Death’ for several reasons. Being the highest structure, he could view the entire ground where the event was being held. He was sure to spot some of his missing students in the large crowd. But more importantly, he realized that on occasions like these, with their pretensions of being religious- i.e. honoring a religious dead saint Baba Pir- people were actually insulting the holy religion. Assadullah wished to implore the masses and convey to them the reality of sins of the event. And no place better to lecture from then on the top of the ‘Well of Death’. Though the Ferris wheel was taller, delivering a lecture while rotating in circular motions would require constant tonal and pupil adjustments making the whole process quite tedious. In fact, it would almost look foolish.

Suddenly the sound of ‘VROOOOM’ erupted and caught everyone’s attention. The part-time ‘pimp’, who was also the motorcyclist, was testing his Yamaha and trying to raise the anticipation level of those watching. Sharmelee and Banu raised their arms and stretched out their body for no particular reason. The hormonally charged teens’, condition was further aggravated. The photographer tested his camera. Rozaiba eyes marveled at the resonating ‘VROOOOM’ emanating from the pit of the well. The Maulvi stared with disdain and disgust at the presence of part-time prostitutes Sharmelee and Banu and their supposedly acceptable entertainment values. He turned around and faced the crowd of spectators outside waiting for their turn to be on the ramp, and began at the top of his lungs ‘Ae sara fahashee mela ai. Qayamat diyaan nishaniyaan nain…’(This is all a farce and obscene event. These are all signs of the Day of Judgement). The wind swayed his cloak back and forth as he stood delivering his sermon on the well.

However, the walls of the well began to shake and immediately everyone’s attention was taken away from the Maulvi’s lecture. The pimp had begun driving the vehicle with Sharmelee sitting behind him. The vehicle quickly gained speed, ‘jumped’ onto the walls and began going in circular motions. Gradually the motorcycle went higher and higher. Soon it was almost to the top. Those at the top hung out their hands to hand 1, 5 or even ten rupee notes. Sharmelee collected them as the Yamaha passed by. The 12-year old man jumped up and down laughing in what sounded like a hyena, enjoying the stunt.

The vehicle made a couple of more circles and was beginning to go back down when suddenly, Rozaiba dangled his beautiful new red 100 Rupee note out of mischievous curiosity. The pimp on seeing the distinctive red color, decided to make another round. Sharmelee stuck out an arm to grab the note but Rozaiba quickly took away his hand with the note. The attempt to capture the note made Sharmelee jump a little. This jerked the Yamaha and the pimp tried his best to maintain control.

What happened next all happened in an instant. Realizing that they were going to fall, Sharmelee jumped off the seat and tried to grab whatever the arms could lay themselves upon. The closest things were Maulvi Assadullah’s shoulders. The pimp completely lost control of the vehicle and realized he had 30 feet of life left. Involuntarily he did the one thing that certified his death. In an attempt do something, anything, he embraced the motorcycle. Later on, the spectators would describe the pimp’s action as that of an extremely frightened child holding onto a parent for protection and comfort. When they hit the ground, the motorcycle lay on top of the pimp whose arms were tightly bound around the machine’s fuel tank. The man’s legs gave a few jerks and remained still. Sharmelee had tried to grab the shoulders of the Maulvi, but failed as the arms slipped. As quickly as Sharmelee’s arms slipped, Assadullah’s arms grabbed. With all his might, he wrapped his arms around her, adjusted them to Sharmelee’s waist while she adjusted her arms around the Maulvi’s neck.

Sharmelee and Maulvi Assadullah remained in the embrace with the former weeping at having evaded death. The Maulvi, with arms still around her, tried to realize what had just happened but was unable to. The hormonally charged teens could only stare. The photographer took a barrage of pictures in what was a truly remarkable story for the chattering classes. Rozaiba felt as if he was somehow responsible. The crowd outside, who couldn’t see the accident, gasped at the sight of the figure present in their Maulvi’s arms. The only person who took the whole episode lightly was the 12 year-old man who began to laugh like a hyena, danced obscenely and started singing a lewd Punjabi-filmi song.

There was another knock on the door. Members of the household knew it would be one of many asking about the aged man’s health. The village had been familiar with the condition of their old Maulvi for quite some time. They had begun to sense his last moments were near. Now those moments had passed. Members of the preacher’s household told those who came to attend the funeral that Maulvi Assadullah died content. The family members did not reveal that the Maulvi had used his last gasps in a fit of uncontrollable laughter- almost like that of a hyena.

Author’s Note: I enjoy the vibrant and shifting cultural mores of the Pakistani culture. I enjoy reading works of authors liks Marquez and Mahfouz who write about towns, streets and alleys and find in them universal values.