A Black Day in the history of the Indian Subcontinent

March 19th, 1940 – A Black Day in the history of the Indian Subcontinent

March 19th, 1940 was a black day in the history of the India subcontinent; on this day, a large number of Khaksars were killed in cold blood. These Khaksar martyrs laid the foundation for the end of British rule in the sub-continent and seven years later, the long British Raj came to an end. This piece is written to remember Allama Mashriqi’s son and Khaksar followers, who were mercilessly killed or injured on March 19th, and to show how the Khaksar Tehrik’s role was suppressed in the freedom movement.

By the late 1930s, the British had become increasingly aware that Allama Mashriqi – along with his private army known as the Khaksar Tehrik – were planning to overturn British rule by June 1940. In order to protect their own rule, the British decided to arrest Mashriqi and crush the Tehrik; accordingly, the British rulers signaled to Punjab Premier Sir Sikander Hayat Khan (also a member of the Working Committee of the All-India Muslim League) to take drastic measures to suppress Mashriqi’s Khaksar Tehrik. On February 28, 1940, Sir Sikander imposed restrictions on the party.

On March 19, 1940, 313 Khaksars marched in Lahore in protest of the restrictions on the Tehrik. The police, under the command of British officers, arrived on the scene and acted arrogantly towards the Khaksars, ordering them to stop the protest. The Khaksars brushed aside the order and continued marching. This was an unprecedented action under British rule – a group of Indians dared to ignore the order of senior British officers. The Khaksars’ courage came from Mashriqi, who taught them to always maintain their self-respect, courage, and pride. British Senior Superintendent of Police, Donald Gainsford, was shocked by the Khaksars’ defiance and could not accept the insult, so he slapped Khaksar Inayat Shah. This resulted in a “serious clash” between the two sides.

The Deputy Superintendent of Police P.C.D. Beaty ordered the police to open fire and they began indiscriminately shooting at the Khaksars. According to the district police register maintained by the moharir (record keeper), 1,620 rounds had been issued to the police at the start of the day and only 1,213 were returned, meaning 407 bullets were fired. A large number of Khaksars were injured and over 200 killed (though officially reported figures were lower). The cruelty was no less than that seen at the infamous Jallianwala Bagh tragedy in April of 1919. 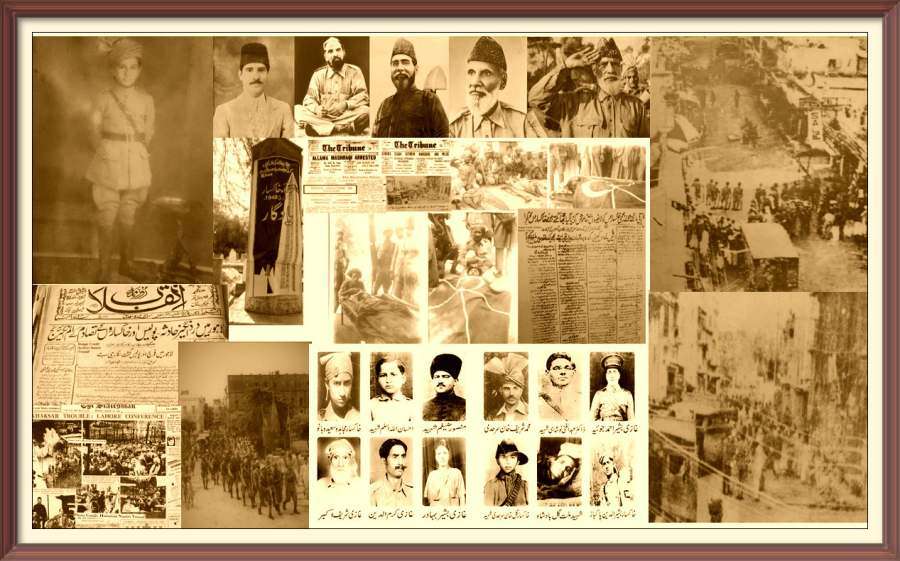 On the same day as the Khaksar massacre, police and the military raided the Khaksar Headquarters and Mashriqi’s house (adjacent to the headquarters) in Icchra, Lahore. The police arrested the Khaksars and Mashriqi’s two sons. Mashriqi’s third son, Ehsanullah Khan Aslam, was badly injured by police and later died on May 31, 1940 (Aslam’s funeral was among the largest in the Indian sub-continent’s history, with over 50,000 mourners attending). In the evening, Mashriqi, who was in Delhi at the time, was also arrested (please see my other published works for additional details on this tragedy).

In the aftermath of the massacre, “Lahore was placed virtually under emergency laws.” The army began patrolling the streets and a curfew along with Section 144 (prohibiting gatherings of more than 5 people) were imposed. Processions and protests were banned and the telephones of Khaksar leaders were disconnected. The public’s anger was also censored – nothing could be published without the consent of the authorities. For example, the Khaksars were not reported as martyrs. News about the incident on radio and print media in India and across many countries largely followed the British Government’s propaganda and attempted to justify the Government’s actions.

In India, the entire nation was shaken by the merciless killing of the Khaksars, who had done nothing wrong. In fact, a key tenet of the Khaksar Tehrik’s ideology was social service to people from all faiths (Muslims, Hindus, Christians, Parsis, Jews, Sikhs, etc.). As such the public respected and loved the Khaksars. Journalist Muhammad Saeed wrote in his book A Lahore Memoir, “Lahore lay under a pall of gloom owing to a colossal tragedy that had occurred two days earlier.”

It was under this backdrop that the All-India Muslim League held a Session from March 22-24, 1940. The purpose of the Session was to pass the Lahore Resolution (later known as the Pakistan Resolution). This resolution was supported behind the scenes by the British; one example of this support is the fact that the Government lifted Section 144 (imposed a few days prior) to allow the Session to proceed. Tens of thousands of people, including aggrieved and angry Khaksars, showed up to the Session to protest and voice their anger at the Government. The people demanded an independent inquiry into the Khaksar tragedy, the release of Mashriqi, his sons and the Khaksars, the removal of the ban on the Khaksar Tehrik, compensation for the families of the martyred and injured Khaksars (many of whom were extremely poor), and the ejection of Sir Sikander from the Muslim League. The venue was filled with pro-Khaksar banners and echoed with chants and slogans such as Allama Mashriqi Zindabad, Khaksar Zindabad, and Sikander Murdabad (death to Sikander). Sensing the emotions of the charged crowd and fearing the disruption of the session, the Muslim League passed a Khaksar Resolution (moved by M.A. Jinnah) along with the Pakistan Resolution.

The Khaksar tragedy on March 19th left behind remarkable stories of Khaksar bravery and heroism, which reflect the training Mashriqi inculcated. For example, Khaksar Sher Zaman recounted a story in his book (Khaksar Tehrik Ki Jiddo Juhad Volume 2) of Khaksar Mansoor Zaigham. Zaigham was hit by bullets on March 19th, but he did not let the Khaksar Tehrik’s flag fall to the ground. As he was taking his last breaths, another Khaksar came forward to take over the flag and kept it upright.

“There was a fruit shop at the corner of the street opening upon Naugaza’s grave. A middle-aged man managed it. He had fled during the slaughter and what made the tragedy unbearably poignant for him was that on return, he noticed a one-anna coin on his seat. A wounded Khaksar had dragged himself up to the shop and lifted an orange in order to quench his thirst. But his end came too soon and he died before he could strip the peel from it. Nevertheless, he had managed to pull the coin out of his blood-drenched pocket and leave it for the vendor to collect.”

Despite these stories of heroism, there is still no monument in Lahore to the Khaksar tragedy on March 19th. The Minar-e-Pakistan also only references the Pakistan Resolution, but does not mention the Khaksar Resolution that was passed alongside it. The Khaksars who laid their lives for the freedom of the Indian subcontinent (now Bangladesh, India, and Pakistan) deserve to be honored and remembered. Monuments alone are not enough, the subject also needs to be included in the educational curriculum, as the history books remain distorted. Museums should include the Khaksar Resolution and information about Allama Mashriqi and the Khaksars, along with Mashriqi’s murdered son, Ehsanullah Khan Aslam. Throughout the course of the freedom movement, hundreds of Khaksars were killed or injured in different cities of India and thousands were arrested or brutally tortured and harassed. Freedom of the Indian sub-continent would not have been possible without the sacrifices of Mashriqi, his family, and the Khaksars.

To close, I received a touching message last year from a grandson of Senior Superintendent Gainsford (one of the police officers responsible for the firing on the Khaksars on March 19th). I am grateful to the grandson for sending such a nice note and am reproducing it here (with consent):

I am emailing you because I read an article that you wrote in which I discovered something I didn’t not know, and that fills me with shame.

My grandfather was Superintendent D Gainsford who was responsible for the massacre on March 19th.

I don’t know what I expect to get from this reaching out, except to offer my deepest sorrow and shame that my grandfather played such a part in this awful piece of history.

I remember him as a kindly man, with extensive injuries to his face I believe from being struck by a spade carried by one of the protesters.

From one grandchild to another, from one side of history to the other, I send my brotherly love.”

Gestures of goodwill such as this one should hopefully bring some relief to the families of the March 19th Khaksar martyrs along with their supporters and sympathizers. Previously, British Royals, Prime Ministers, and others had acknowledged another historical massacre known as the Jallianwala Bagh (Amritsar) incident, which took place in 1919. I request the Government of U.K. to do the same for the Khaksar massacre.

Nasim Yousaf, a grandson and biographer of Allama Mashriqi, is a researcher based in the USA. His books are available in world-famous libraries across many countries, including at Cambridge, Columbia, Cornell, Harvard, Library of Congress, McGill, National Library of Australia, Oxford, Princeton, and Yale.