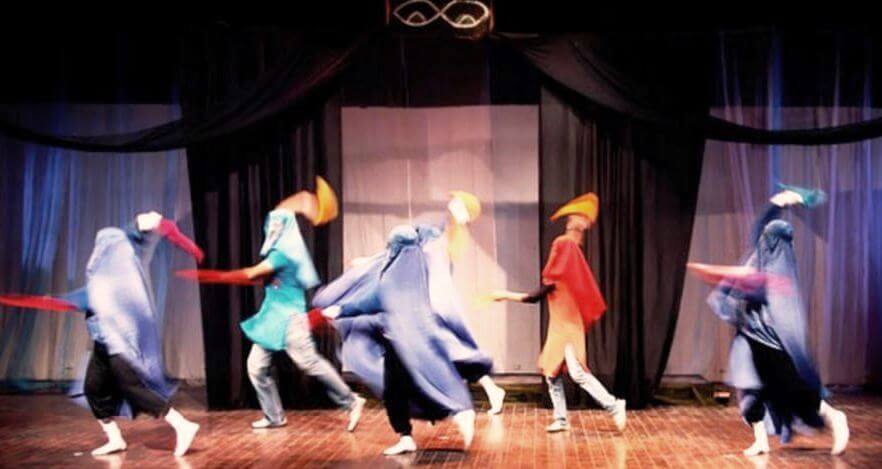 The Hafsa girls took burqa to the street in a blatant way by occupying a children’s library in Islamabad. Later on, they kidnapped a woman whom they proclaimed was a prostitute and was running a brothel in Islamabad. Now the modernists and progressives have taken it to the stage with a vengeance.

The Panj Pani Indo-Pakistan festival staged a play called Burqa Vaganza on April 18, 2007 at Alhamra Art Center. The Indian contribution was a play called Kahan Kabir. Burqa Vaganza was presented by Ajoka Theatre and was written by Shahid Mehmood Nadim to highlight “the importance of consensus and understanding in averting extremism and ambiguities.” The play has comically satirized burqa and sought to underline the hidden hypocrisy.

While burqa is a Muslim tradition and was used in a conventional and voluntary way by the Muslim women, and is still practiced in conservative families, the tide is now turning towards modernity. By wearing burqa, one doesn’t necessarily become any more Muslim than already and likewise, by discarding it, one doesn’t become any less Muslim. It is a symbol of cultural tradition and traditions do change with time. It has once again become a topic of heated discussion which like some other issues, one of which is singing, for instance, has captured public’s attention recently. Is singing allowed in Islam, is a perpetual question which is still un-resolved. The Hafsa girls put on notice the vendors of music videos in Islamabad to wind up their businesses as part of their movement of Islamization. Another issue which emerges on the public scene every now and then is the “respect for beard.” A newspaper’s office was vandalized and ransacked a few years back because it had published an article on beard. It was alleged that it had disgraced the beard.

My take on burqa is that if a person wants to wear it, she should be allowed to use it without fear or fret of others who think it is not “cool.” It should not be enforced by legislation. Similarly, those who do not want to wear it should have the freedom to do so without any fear or fret. Burqa should be a personal choice.

I am more than less in harmony with Ghalib’s view who wrote:

Ghalib believed in “nazr ki sharm”, and I endorse it.

The question of burqa and veil has been politicized in Pakistan. The mullahs who support it and believe in compulsory enforcement have apparently emboldened some people of the public to take law into their own hands. One of the religious fanatics recently gunned down a woman Punjab provincial minister, Zill-e-Huma, when she was delivering a public speech. There is no excuse or defense for such a criminal act.

Burqa Vaganza satirized by showing “modern youth in veil going out on dates and generally sneaking out of educational institutions, offices and homes for discreet dalliances with friends of the opposite sex.” The conservatives have demanded to ban the staging of this play. The opinions, as always, are divided. For now, the play has been barred. The Culture Minister Sayed Ghazi Gulab Jamal said, “The burqa is part of our culture. We can’t allow anyone to ridicule our culture.” By ridiculing burqa, how is one ridiculing the culture? Burqa is not our whole culture. Unless one is willing to change some of our traditions which have apparently outlived their natural existence, how can one reform the society?

According to Reuters, “Predictably, religious conservative Pakistanis did not find it funny, going as far as to describe the play as blasphemous, a crime in Pakistan that can carry a death sentence. ‘They have committed blasphemy against the Prophet (Muhammad),’ Razia Aziz, a female lawmaker from the Islamist opposition alliance, told the National Assembly.’” Oh, dear God! Blasphemy is appearing here too.

Again, according to Reuters, “Mehnaz Rafi, a lawmaker for the ruling Pakistan Muslim League from Lahore, opposed the government giving in to the Islamists. ‘A few people cannot dictate affairs of the state. Every person has the right to lead his life his own way. A few people cannot snatch freedom from society,’ Rafi said.”

The current movement by the mullahs in Pakistan is an effort to isolate the women-folks completely and put them within the confines of their homes. This is a very retrogressive step and an insult to the Pakistani women.

Around 1960, when I was working in WAPDA, a colleague of mine and I were going some place on official business in a departmental jeep. As we came out of our office’s premises on to Queen Road, we noticed a tonga going in front of us. There was one burqa-clad woman sitting in the back seat and she was the only passenger. My friend said to me, “She is a hooker.” I asked, “How do you know?” While we were talking with each other, the tonga slowed down and the woman waived at us with her fingers to slow down. My friend smiled at me and we continued on our way. This was in the broad day light. The tonga also gathered momentum and moved on.

I end this essay by repeating Ghalib’s verse: