Jinnah’s statement on the Congress demand for Shariah rule: By Khurram Ali Shafique 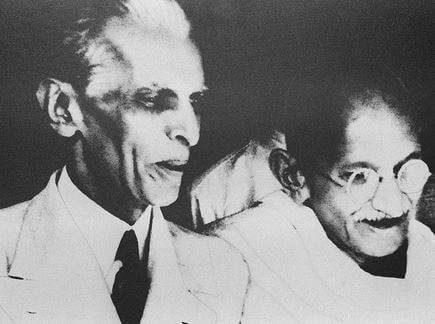 On 3 June 1947, the British Government announced its acceptance of the principle of federation suggested by the All-India Muslim League, i.e. two sovereign states should be formed in Indian subcontinent on the basis of the ‘agreed consent’ of the people (generally but oversimplistically known as ‘Partition’). The Indian National Congress endorsed it through a meeting of its Committee on 15 June, and Gandhi also agreed.

According to this agreement, the people of NWFP (now KPK) were to decide through a referendum whether they wanted to join Pakistan or India. The prominent leaders of the provincial branch of the Congress in NWFP (now KPK) passed a resolution in contradition to this agreement on 21 June and it got published in the press on 23 June. It demanded an independent state of Pathans and strict enforcement of Islamic laws. The resolution received full blessings of Gandhi, athough he had earlier agreed to the Partition Plan (see the accusations raised against him by Jinnah).

The perpetrators of this resolution included Khan Abdul Ghaffar Khan, his brother Abdul Jabbar Khan (‘Dr Khan Sahib’) and Mirzali Khan (‘the Faqir of Ippi’), a militant from Waziristan. They also asked the people of the province to boycott the referendum, and launched a massive propaganda to the effect that the parliament of Pakistan would not be a competent authority for enacting laws for the Muslims.

Jinnah issued the following rejoinder from New Delhi on 28 June 1947. The singular importance of this statement cannot be exaggerated in view of the circumstances in which it was issued, and perhaps it deserves to be read carefully by everyone – and not just in Pakistan.

I regret that Khan Abdul Ghaffar Khan has not, as arranged, so far communicated to me the decision of the Frontier Congress organization, but the text of their resolution has been released to the Press and was published on June 23. I am, therefore, obliged now to deal with the matter according to the Press reports.

The resolution lays down

That a free Pathan State of all the Pakhtoon should be established.

That the constitution of the State should be framed on the basis of Islamic conceptions of democracy, equality and social justice.
It appeals to all the Pathans to unite for the attainment of this cherished goal and not to submit to any non-Pakhtoon domination.

After the plan having been accepted by the AICC, the Frontier Congress organization was bound to honour this agreement and acceptance by the Congress of which they are part and parcel; the Frontier representatives of the Congress were present in the Congress Working Committee as well as in the AICC and the decision was taken finally in their presence.

It follows, therefore, that the Congress are bound to honour the terms of the plan, but, instead Mr Gandhi has since been expressing views at his prayer meetings which are calculated to encourage the Khan Brothers to sabotage the plan, to incite the people of the Frontier and to disrupt the Muslims of the NWFP.

Never before was such an insidious and spurious demand put forward for the establishment of a free Pathan State of all the Pakhtoon by the Khan Brothers or anybody else. This is a new stunt recently started and slogans are being invented to mislead the people of the NWFP.

There is no truth in it nor is there any ground or reason for it. This is only a subterfuge on their part intended to mislead the Muslims of the NWFP.

The Khan Brothers, specially Abdul Ghaffar Khan, who is proud to call himself the Frontier Gandhi have not the monopoly of true Islamic conceptions of democracy, equality and social justice: and, till yesterday, they were wedded to nationalism, the theory of one Indian nation and the Congress demand for a strong Federal Government for All India.

This sudden and new volte face is a piece of pure political chicanery and manoeuvre intended to prop up the Khan clique in power and it pains me that it has received the apostolic blessings of Mr Gandhi who has declared himself most anxious to see that fratricidal fight amongst the Pathans avoided at all costs.

It is obvious to any intelligent man that the Pakistan Constituent Assembly, as it has been repeatedly explained by me, can only frame a constitution in which the Frontier Province will be an autonomous unit and as such, the people of the Frontier will be their own masters regulating their social, cultural and educational matters besides the general administration of the Province, as a unity of the Pakistan Federal Government like any other Province or unit in Pakistan.

But the Khan Brothers in their statements and interviews to the Press have raised another poisonous cry that the Pakistan Constituent Assembly will disregard the fundamental principles of the ‘Shariat’ and the Quranic Laws.

This again, is absolutely untrue. More than 13 centuries have gone by and in spite of bad weather and fair that the Mussalmans had to pass through we have not only been proud of our great and Holy Book the Quran, but we have adhered to all fundamentals all these ages; and now suddenly this cry has been raised insinuating that the Pakistan constituent assembly, composed of an overwhelming majority of Muslims, cannot be trusted.

What would have happened to the Khan Brothers – who have now suddenly started out-Heroding Herod in their championship of Islam and Quranic Laws – in the Hindu Constituent Assembly with a brute majority of the Hindus which they willingly joined without demur?

I want the Muslims of the Frontier Province clearly to understand that they are Muslims first and Pathans afterwards and that the Province will meet a disastrous fate if it does not join the Pakistan Constituent Assembly. The three and half million people of that Province which is economically deficit will not be able to stand even for a few months by themselves and politically and geographically the Province will be reduced to a nonentity.

Although there are great potentialities for the NWFP to make its contribution to Pakistan in times to come it will be to start with a liability to Pakistan financially and the other Provinces and units like Punjab, Bengal and Sind will have to foot the Bill in order to raise the people of the Frontier to a higher level economically and socially to say nothing of the defence.

For all these considerations I appeal to every Muslim in the NWFP in the interest of solidarity of Pakistan and the vital interest of the Province to vote solid in favour of joining the Pakistan Constituent Assembly.

Finally, I appeal to you not to slacken your efforts and not to be pulled into the belief that our opponents have decided to boycott the referendum but be vigilant and record every vote in favour of Pakistan Constituent Assembly.

The Khan Brothers are the last ditchers and we want to expose thoroughly the fraud that they have practised upon the Muslims of the NWFP for nearly a decade. They have succeeded in the past in bamboozling and misleading the Pathans at the behest of outside authority of the Congress.

Let us hope that they will not succeed in depriving the Pathans for all time and that you will give your clear and thumping verdict in favour of the Frontier Province joining the Pakistan Constituent Assembly.

I take this opportunity to thank the tribal areas for the message of good wishes and greetings that they have sent me and I may again state that the Muslim League and the Pakistan Constituent Assembly will honour and respect their freedom and will be always ready and willing to come to brotherly understanding with them which will be to the advantage of both.

Therefore, do not be misled by any false propaganda that the Muslim league has any intention or design to interfere with the complete freedom of our brethren there, who have resisted all efforts to interfere with them and have remained so far free people. I am happy that we are also now going to be completely free people in Pakistan and we shall only do what is best and in the interests of both.