Spirits Rebellious by Khalil Gibran is a marvelous historical fiction novella about the close relationship between religious people and the capitalists who are supporting each other against the people under them. This nexus took place in Lebanon when the writer was stepping into his years of youth.

The author has divided the people of that society into three major types, the capitalists, the religious, and the poor. A man by the name of Khalil becomes an orphan when he was spending the seventh autumn of his life. He takes refuge in the church of his diocese. He is made the shepherd of the Church’s cattle and is asked to take the oath to spend his whole life in destitution, obedience, and being chaste. He obeys but he notice that the bishops and the other people of the Church spend luxurious life; they eat fresh food and sleep on peaceful beds. However, as he is made to take the oath; so, he spends the real life of a destitute; eats stale food and sleeps in a dark room on an uncovered floor. 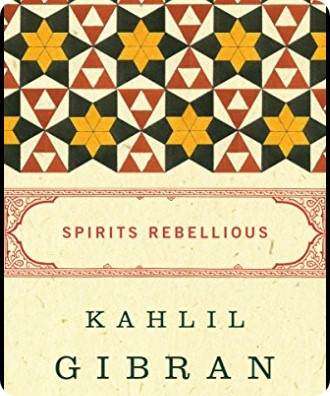 One day, Khalil comes to know that the place where the Bishops have made their Church and Monasteries belong to the poor working class. The places are taken by force by a capitalist, Sheikh Abbas from the dwellers, the destitute and are given to the people of the Church and in return, the Bishops are busy protecting the fields and gardens of the Sheikh by inculcating the spirit of obedience, accepting luck, and mortality of everything in the brains of the poor people. As he comes to know the truth, the story behind the nexus, he revolts against the people of the Church and asks them to return all the lands of the poor people according to the teachings of the book. The bishops throw him out of the Church and call him an infidel. On the chilling night of the winter, he is saved by a woman, Raheel and her daughter, Maryam.

Two weeks later, a bishop, Alyas informs the Sheikh and asks him to punish the infidel, Khalil.  Sheikh Abbas brings Khalil with the help of his soldiers and intends to punish him in an open court, in the presence of all the poor people. When the Sheikh asks Khalil to tell his story of disobeying the Church orders, Khalil, an eloquent speaker goes on and tells the whole story which was behind the nexus of the Church and the Sheikh. He calls Sheikh Abbas the conqueror of their lands, and the poor people, the actual owners of the land. He becomes successful in convincing all the poor people by telling them about the hidden conspiracy of the Church and the Sheikh. The Sheikh tries to stop him with the help of his soldiers but no one helps him. Khalil returns the lands to the poor people from the clutches of the Church and the Sheikh. Now, every farmer is the owner of his fields and their output. They reap what they sow. Khalil still works with people and takes part in the collection of grains, the squeezing of juices, and the plucking of fruits.

Spirits Rebellious is a profoundly touching story of the revolt against the capitalists of the time and the making of a society based on communism from an iconic Lebanese writer that will stay connected with the people for a long time to come.