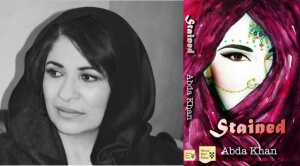 Abda Khan is a Solicitor of over 25 years, and runs her own successful law firm. She is also the author of the novel, Stained, which was published in the USA in October 2016, by Harvard Square Editions. It is available worldwide on Amazon.
Stained, which has been described as the “contemporary Tess of the d’Urbervilles” (Booklist, USA) is the story of a wronged young British Asian woman and her fight for justice. It delves into a number of taboo subjects, including rape and honour.
Abda was inspired to write the book as a result of her experiences of working with women from the British South Asian and Muslim communities, and the problems that they face, and the lack of contemporary British fiction depicting such characters.  She also hoped that the novel would help to highlight these issues.
Following the publication of Stained, Abda has done much to raise awareness about the help that is available for victims and survivors of rape, sexual violence and “honour” based crime in media interviews, book launches, literary festivals, and talks at schools, universities and charity functions, both in the UK and the USA. She was recently recognised by IKWRO at their True Honour Awards in London for her work.
As well as being a writer, lawyer and public speaker, Abda also volunteers with Women’s Aid, and is a Mentor with the charity Mosaic. She is currently working on her second novel.
www.abdakhan.com
@abdakhan5
www.facebook.com/abdakhanwriter
07525 142932