Nusrat Fateh Ali Khan left us at his prime time at an early age of 48, but there is no moment in Pakistani and Indian music scene when his tracks, remixed by other artists, are not on the music charts. 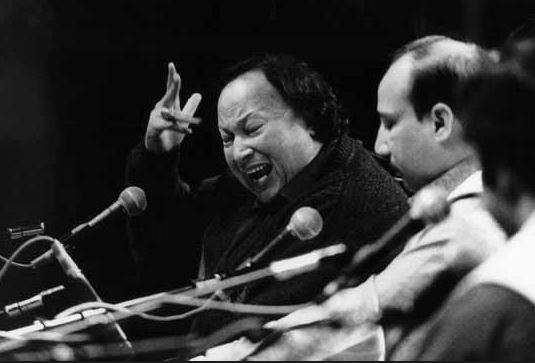 Whether it is Mere Rashke Qamar] (17:42) or Tumhein Dillagi Bhool Jaani Padegi (16:25), Nusrat Fateh Ali Khan’s genius continues to grow as he inspire thousands of artists and loved by millions of fans.

With advent of modern music, as more and more genre of classical music fade away, Qawwali is one form that has only become more popular and now many Bollywood movies have some Qawwali or Sufiana track since these are loved by audiences.

Sanu Ik Pal Chain Na Aye: Nusrat Fateh Ali Khan’s beautiful Punjabi Qawwali, simple in its poetry as well as tune, but remains one of his best. Listen to this amazing composition to see why Nusrat Sahib’s fan following continues to increase everyday.