Hazaras Conundrum- Is the state itself a brainchild behind Hazaras’ miseries?

Pakistan, since its inception, is caught in multiple vicious cycles. Security concerns have always overwhelmed the state. Despite making its military establishment much powerful, it seems Pakistan is still vulnerable to many threats- internal as well as external. Inter and intra religious strife is really causing anguish pain and has afflicted the whole society. In this article, we will seek to find the underlying reasons of Shia-Sunni tussle, which has wreaked havoc. Mass killing of Hazaras on January 3, 2021 in Mach is an extension of continued sordid saga.

Thou mayhem of Sectarianism lingers into the third decade of twenty first century, it was intensified manifold in following ‘bigoted’ policies of General Zia. Shias are about 15 to 20 percent of the entire population of our motherland. Pakistan has the second largest number of Shias after Iran. Shia and Sunni squabbles goes back to 17th century in the subcontinent, when Shah Wali Ullah sought to oil the troubled waters and called upon Muslims on both sides of the divide to show restraint and promote harmony. Thought it did greater good at that time, problem still lingers. Before knowing the execution of Hazaras in Pakistan, one must know their history of arrival in Pakistan. Hazaras were residents of Central Afghanistan till the 19th century, when maltreatment of Sunni ruler, Amir Abdur Rahman, pushed them out of their settlements. Resultantly, they migrated to Kurram Agency and Quetta- today in Pakistan. However, their fate did not change. Hazaras are suffering largely for being Shias.   Even the well-off from them had to face miserable situation. For example, even General Musa, who belonged from Hazara community and fought 1965 Indo-Pak war, had to shift to Iran to save his life from bigots and buried in Mashhad, Iran. Soviet Union intervention in Afghanistan in 1979 for its political goals, fueled the fire and proved to be disastrous for Hazaras as many of them fled to Quetta to escape persecutions at the hands of Sunni militants who were called from around the world to combat the USSR. But, their migration could not save them from the fanatics’ wrath 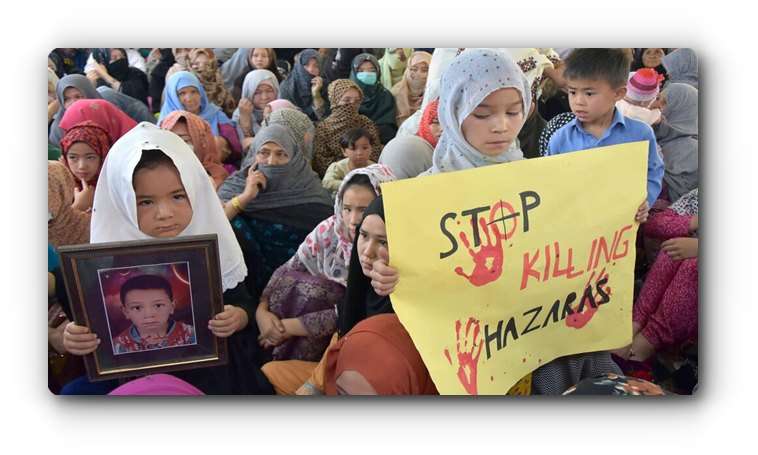 There are multiple reasons for intra-religious tense environment in Pakistan. One of them is illiteracy and unawareness of basic facts. Hazaras’ persecution at the hands of the Sunnis militants group is not ignorable. The general public in Pakistan has developed a sectarian nature due to the lack of knowledge of the Deobandi-Shia conflict of the past. Liaqat H. Merchant, in his book Jinnah: A judicial verdict provide us helpful insight, that the founder of Pakistan was an

Ismaili who chose to become Shia in the 1920s to help along his political career. It is also not known to most of our masses that Maulana Shabbir Ahmad Usmani signed a fatwa declaring all Shias as infidels, later he led the funeral of a ‘infidel’ Muhammad Ali Jinnah. History is not the lifeless study of past, it is a living and evolving dialogue about the most important subject of human experience. Second, it is widely said that the sectarianism nourished as a result of state policies of Pakistan. In 1980s, under General Zia, the sectarian violence was on ascendancy in Pakistan. The land and people of our country were used in the clandestine operations against Soviet Union.  The economy of the tribal people was not legal, they exercised smuggling as commerce. The absconders from across the country got shelter in ‘safe heavens’ of tribal areas. Thus, the militant organization i.e. Al Qaeda relocated in these areas.

At that time, most of the militants belonged to Deobandi and Ahle Hadith, both schools are traditionally anti-Shia in their thinking. Thus, state sponsored the anti-peace elements for so-called ‘national interest’ and pushed this country in an inextricable quagmire.  Those Jihadists flared the sectarianism in Pakistan.  Moreover, the fatwas of apostatisation about Shias played greater role to flare the violence. In 1986, Darul Ulum Haqqania Akora Khattak of Maulana Samiul Haq gave out its own fatwa of the apostatisation of the Shia. Maulana Muhammad Malik Kandhalwi, from Jamia Ashrafia Lahore, declared the Shias Kafir. It was against the Constitution of Pakistan because the Clause 3 of the Second Amendment in the Constitution to Article 260 was passed on 21 September, 1974 which explained the definition of a Muslim. Unfortunately, rather than bringing the ‘culprits’ to justice, state acted as an accomplice. Also, external elements’ involvement cannot be undermined.

Interestingly, ironically, all the Shia-related Pakistani fatwas in 1980s were compiled in Lukhnow, India and were issued in Pakistan. Moreover, current belligerent tone of India towards Pakistan is an extension of the past. However, Ajit Devol’s, India’s National Security Advisor, doctrine of taking wars to the land of foreign ‘enemies’ is vociferously a manifestation of India’s intransigence about putting the peace of this region at stake. Recent Hazaras killing in Mach can be a result of India’s incursion in Pakistan’s pure land. Since, Kulbushan Yadev, an Indian spy, was caught red-handedly by proactive Pakistan’s intelligence agencies in Balochistan and confessed about his unholy designs, above statement can easily be proved. One can easily connect these dots to draw a fine line that India has always been involved in igniting the sectarian violence in Pakistan. It got such an opportunity due to aforementioned Pakistan’s state policy to assist one particular sect at the cost of others for its so-called ‘national interest’ in Afghan Jihad. It fueled the fire of Sectarian strife when masses were massacred from both sides of the divide – Sunni and Shia.

Despite many flaws, state, however, sought to lower the tension between different religious sects. In the past, it attempted to curb this evil in the bud. For example, the government passed an Anti-Terrorism Act of 1997, in which Section 8 related to ‘Prohibition of acts intended to stir up sectarian hatred’. The core elements around which this anti-sectarian law revolved are ‘threat’ and ‘insult’.

Another effort by the state in the shape of the Anti-Terrorism (Amendment) Ordinance (2001) was promulgated with the intent of allowing the administration to move against violence against the places of worship. In August 2001, General Pervez Musharraf banned seven terrorist organisations in Pakistan including Sipah Sahaba Pakistan and Sipah Muhammad Pakistan. But the massacre of Hazaras Shia in 2003 and 2004 proved that these measures were not enough. Both of them were the worst sectarian assaults, in the history of Pakistan, on Hazaras community. On the day of Ashura (10th Muharram), hundreds of Shia were killed in Iraq and Pakistan at the same time. Moreover, following those bloody attacks on Ashura, Prominent religious figures of different sects including Maulana Azzam Tariq, Allama Arriful Husain, Allama Nasir Abbas and many more were killed. It portrays a very grim picture in terms of handling this conundrum by the state.

But, recent killings of Hazaras people give certain lessons. Despite the horrendous attack, it can be seen that the intensity and frequency of such attacks have been dropped precipitously- thanks to law enforcement agencies. Many prominent writers endorse it as well. “The sectarian cauldron is not on the boil recently as it was in the years following 2001. But it can be stoked again into intense temperatures because of the unleashed power of Madrassa in Pakistan”, as said by Saleem Ali in his book Islam and Education: Conflict and Conformity in Pakistan’s Madrassas.

But, since the cycle has not fully terminated, some pertinent steps can help Pakistan minimize and gradually end such squabbles.   Firstly, Pakistan is a diverse country on multiple fronts. So, state should not sponsor any one culture, ethnicity or sect as it was seen in the past. Rather, it should promote interfaith and intra-faith harmony by establishing councils at local, provincial and national level to encourage dialogue and resolve sectarian conflicts. Prominent moderate religious figures can be requested to play their positive role in this regard. Secondly, Pakistan should adopt proactive policies to forestall any such incidents in future by punishing the offenders and increasing security. Thirdly, Pakistan should appraise the United Nation and multilateral organizations of Indian bellicosity against Pakistan and implications of the nefarious designs for the whole world.

Syed Zeeshan Haider is associated with the Department of Political Science at Government College University, Lahore. He can be reached at zeeshanhaider.gcu@gmail.com.