The Argumentative Amartya? – By Farzana Versey

The tragedy of Amartya Sen is of being a non-hero, a Buddha without renunciation.

There has been a great deal of flurry over his new book, ‘The Argumentative Indian’, a collection of essays discussing how democracy
is linked to the country’s argumentative tradition. He has a propensity for creating imaginary allegories.

A few years ago he had come up with the facile belief that famines existed where there was no democracy. He had written, “… famines have never afflicted any country that is independent, that goes to elections, that has opposition parties to voice criticisms, that permits newspapers to report freely and to question government policies without extensive censorship.”

Simply speaking, we would be talking about rich societies, socially or economically. Why bring democracy in? Forget famines. What about the other problems that beset a country like India? We have democracy, which Sen finds so delectable. Then why does he subscribe to state intervention? He had concurred that the role of the state even in matters like nutrition, health, education, social insurance was connected with the outcome of economic processes, which must empower people to become economic agents in their own right.

Here was a clear case of making both sides happy without giving a thought to the fact that state intervention can never empower people; it only results in dependency if not degradation.

Perhaps, he does not mind that at all. As he once stated, “Buddha was asking himself what kind of life is that (of illness, old age, mortality)? These are problems we all face. For many of us it is also the impetus for our work.”

Whenever our filmmakers, artists, photographers, writers portray the Indian reality abroad, they have been accused of exploiting our poverty. Why is that Professor Sen has been exempted from such blame?

The main reason, as I see it, is that we have a politically-correct individual here. Can a politically correct individual ever be brilliant? Would he not be shackled by his own need to work within the circumference of logic and rationality and miss out on many original thoughts? In fact, Prof. Sen has often been credited with linking an abstract subject with real people, but even if his theories are relevant does the outcome reach these real people?

And what do we celebrate about him, anyway? He may have rejected “voodoo economics”, but he paid his taxes to America. Cambridge glorified his work because it did not have to live with the reality he spoke and continues to speak about. So, what do we preen about? That he held on to his Indian passport? According to the good professor, “A single citizenship is important to me because there is no loyalty conflict. I don’t feel British, I don’t feel American. I feel Indian.”

These are very convenient sentiments when you are a green-card holder in Uncle Sam’s land, teach at tony universities, and make annual trips to your roots to check how much further down the poverty line has slipped and return to your ‘naturalised home’ with these inspirations.

Amartya Sen knows as well as we do that he wouldn’t have stood a chance in hell to get anywhere near the sniffing Nobel Committee had he lived in India, because it does not sound terribly exotic to talk about the muck in your own backyard from your own backyard. It is also not politically-correct — unless you are talking about a Mother Teresa-like Nobel Peace prize.

That is what Prof. Sen should have got — for making peace with himself and his environment. After all, hadn’t he so conveniently washed himself of all responsibility when he said that if he were the finance minister of India he would have quit?

Brilliant people do not merely air their tweed jackets; they take risks.

As John Nash did. He got a Nobel in Economics for his games theory in 1994. By then he had spent two decades in psychiatric treatment and was living in obscurity. There must have been some extra spark to his work that allowed for his resurrection.

Am I saying that you have to be a little ’mad’ to be brilliant? No. However, I am convinced that those who have experienced an unusual life – whether it be through an illness or any intense experience — would be more inclined towards original thinking. For, they have nothing to lose but their equilibrium, which has supposedly been lost anyway. Just go through the roster — Dostoyevsky was an epileptic, Maupassant was deemed crazy, Sylvia Plath suffered from severe depression, Ayn Rand went mad, and Ghalib, on the basis of an analysis of his work, has now been diagnosed as a manic depressive.

Some people do well because of their sanity. Whereas insane people — and I use the term to include those with idiosyncrasies — succeed because they do not care whether they do or don’t. It must be taxing to spend a large part of your life wondering whether you will be rewarded or not for something that the prize-giving world will not even be aware of.

Amartya Sen comes across as one of those terribly normal human beings who want to be on the right side of everything, even as they supposedly speak their minds.

In the meanwhile we may as well celebrate Amartya’s hamartia. 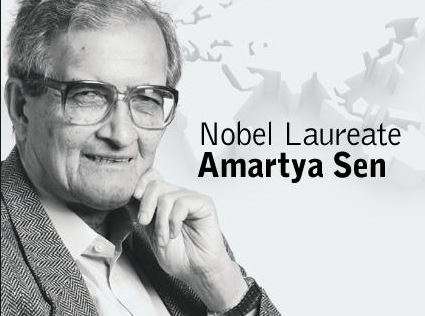