I always thought Manto to be like Marmite. Either you love him or loathe him. I guess he was aware of this fact.

Yet, it hard to find a writer who is as comfortable with Ink as him. We are producing a rare excerpt at the end of article, in which he asks himself the questions ‘Why do I write Fictional Short stories?’

Words come to him so naturally that it seems he was sent to the world packed with them already. But here is a caveat. For him no word is dirty, and he never seems to be concern with selection of the most appropriate words. He just writes. Whether it offends  friends, critics, establishment or God, he doesn’t seems to care.
At the epilogue of one of his books, he quirkily writes his own epitaph as below.

Here is buried Saadat Hasan Manto.
With him lie buried all secrets of the art of fiction writing.
Under mounds of soil, he is still wondering who is the greater short-story writer: him or God?”
However, in reality his gravestone depicts something different, yet equally intriguing, see photo below. 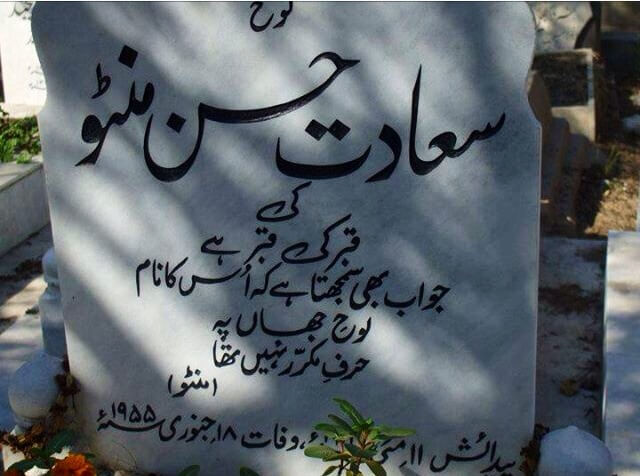 “This is the blessed grave of Saadat Hasan Manto, who still believes his name was never meant to be repeated on the divine tablet of the world”. It seems the word ‘Tabarak’i is written in a way that it seems ‘Qabar Ki’.