The Karachi Brides : By A. Ali 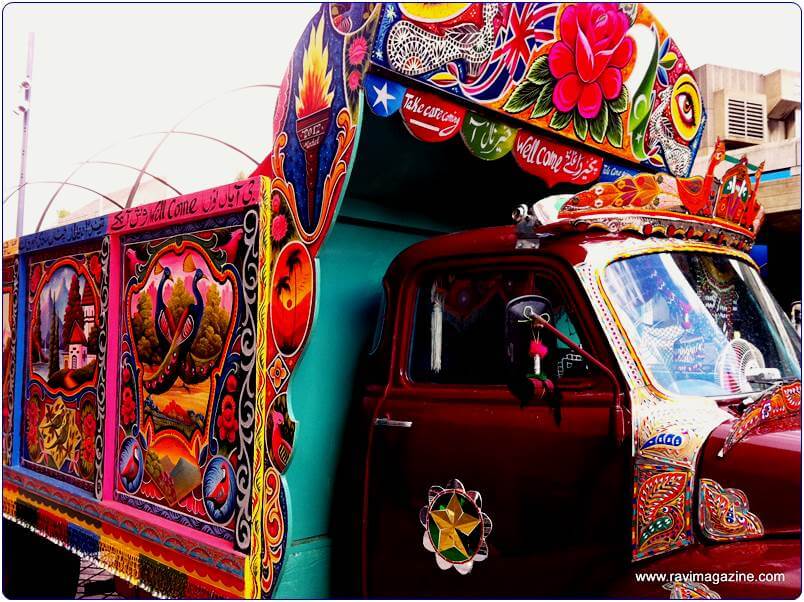 If I were to name the transport buses that storm the Karachi roads all day I would call them the Karachi Brides. This isn’t only because of their appearance, but the ‘look-at-me’ attitude they emit while threatening the population all day long. For the Englanders their hot red double-deckers are

simply transport vehicles; here, the buses are multipurpose social machinery: only our country could produce such Guinness Book material.

A standing ovation is owed to the bodymakers the craftsmen who fit finely-worked tops on the plain bodies of the buses. Their workshops are like Depilex salons for these newlyweds and stud them with jewelry and flashy clothes. I’m amazed to observe the metallic wear that suspends from both the front and the rear of the bus: heavy cable chains and spade shaped metallic hangings clink when the bus moves, serving to give an ultimate punk rock look.

Once the bodymakers have done their job, it’s time for the artists who paint and print on the bride: they have unconsciously invented vehicle cosmetic art. The floral imagery; reflecting fourteen colours of their own rainbow, is accompanied by scenes from the homeland districts of the bus drivers – the sceneries painted can work as excellent tourism advertisements for places like Chitral, Swat and Mardan. While driving through the busy streets of Karachi that hum with a monochromatic traffic buzz, the buses are a feast for the eyes: the mountains, the clear blue waters of the lake and the peaceful swans splashing their wings in it.

You snap back to reality with another splash: a fountain of red spraying out from the driver’s window and hitting the Karachi road to make its mark forever. He’s an arrogant man, the bus driver, usually a hot-headed guy from the tribal areas who’s seeking a livelihood in the great metropolis. Apart from looking like a psychopath serial killer, having slain a couple of innocents, his attitude is unmatched even by the city police. By the way, the red fountain was from the betel leaf or the paan.

His word is law; like they write at the back ‘Naa chher malangaan noo, and he isn’t very happy with the concept of the bus stop. Any place that has a healthy number of passengers becomes a bus stop, regardless of the countless crashes and the car pileup that may happen behind him. His contribution to society is that this habit has converted the designated bus stops into shelters for drug addicts, because no self-respecting bus driver will stop the bus anywhere but the middle of the road.

In Karachi, the Pathaans have a monopoly in the bus services and they pretend to be the rock stars of the roads. These Khans behind the wheel bestow on themselves royal titles like ‘Prince of Kohat, ‘Shehzada-e-Balakot etc. I suggest ‘the dark lord’ of the ‘corpse bride’. Occasional variations like ‘Pilot Asif Jhaa of the ‘Aakhree Sawari can also be seen. Yes, buses have names too! Some are ‘Sharmeeli Naagin and others are ‘Haseena Atom Bomb. 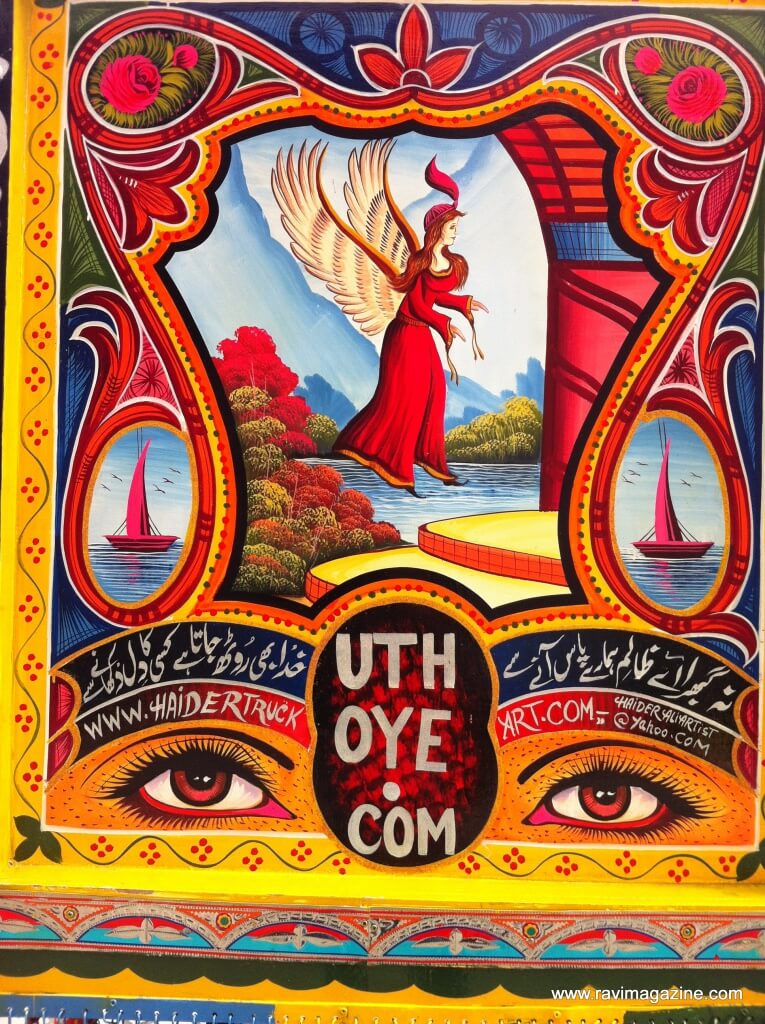 The people of Pakistan are known to glean the best out of everything; each drop from a lemon, every scrap of food from the pans, and so on; and so in an approximately 35-seater bus, a Karachi bus driver is known to accommodate 70 people not including those sitting on the roof and hanging out of its rear.

There’s always the road race where the ‘serial killer pilots of this ‘atom bomb sawari bet on people’s lives and race with their fellow drivers through busy roads, zigzagging and overtaking, using the massive bodied bus as a weapon rather than a means of transportation.

Another practice uncommon to western transport services is the separate seating for females. Well, you have to do it when the uneducated sector of men folk in Karachi cannot resist temptation: despite the segregated seating, the women in hijabs cannot help but feel uneasy at the penetrating x-ray stares.

Casting a sympathetic look on the sufferers of this sawari  the passengers, you might want to hold your breath. I don’t find a reason as to why like the killer Thundermountain roller coaster of Disneyland or the Demonator Death Machines from theme parks, these buses don’t have warnings printed on them as a courtesy to the elderly, the children, pregnant women and people with weak hearts? Since the air conditioning has been sawed out and sold at Chor Bazaar, the only vent for sweat and fart scented air is either the exit with no door, or the various windows with no glass. One foot on the break and you might want to hold your neighbour to avoid landing on the road outside through these vents. Also, despite the religious public service messages painted on the interiors (Allah dekh raha hai), pickpockets find it a paradise. Chacha Basheer, in an attempt to avoid falling on a Bee Amma would not notice when some Pappu Pager or a Munna Mobile would slip his Nokia from his pocket.

So, we have a package out here; culture, art and means of transportation. Where is the ‘Tullaa Force or the policemen, in a manner of respect? Well, they would not want to risk stretching out their arm to signal this bus to a stop, they have families to feed and not end up as steak on Shahrah-e-Faisal road. There is again no intervention when these lethal shuttles serve to spread terror messages across: An angry individual or group can always find a handy bus and set it ablaze to symbolize a successful transport strike (pahiyya jam hartaal). I recommend that there should be a model of our Karachi Bride displayed in the Ripley’s Believe It Or Not museum.