Obsession with Borderline Issues – By Sameer

A flood of replies to a recent article I saw, What Constitutes Blasphemy?, speaks of an obsession by Pakistanis with borderline issues. Instead of condemning the burning of “The Frontier Post” offices and press in Peshawar, the sweating over the discussion about blasphemy is just one of several examples of the infatuation with religious dogma based society, ethics and morality. Other such examples include the branding of Ahmadis as non-Muslim, rights of women according to religion, Hudood ordinance, Riba-free banking and jihadis/ madaris phenomena. Let us face it. A total of less than ten cases of blasphemy, during last ten years in a population of 140 million does not really constitute a burning issue. An obsession with it is unjustified without any indication of marked increase in the number of cases, which are not expected to go up significantly in the near future. Neither Pakistan, nor Pakistani society is in any danger because of few cases of blasphemy. The obsession with the politics of blasphemy is a problem; blasphemy itself is not. The obsession with borderline issues is a direct consequence of our passionate attachment to the borders of Islamic dogma. 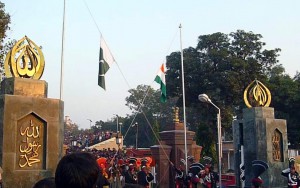 The concept of dividing everything between two extremes was originally a Persian, or Zoroastrian idea that was included into the Jewish thoughts during their exilic period. Both Islam and Christianity adopted this concept of two extremes into their dogma. It leaves out a great deal of gray area between extremes of black and white, heaven and hell, virtues and profanity and good deeds versus sins. Religious scholars relying on traditions, local cultures, Sunnat, Quran, Hadees and Sharia, in the case of Islam, later filled the gray area. Several factors other than honesty and knowledge contributed to the fame and acceptance of the work of these scholars. Relying strictly on the four pillars (Sunnat, Quran, Hadees and Sharia) or including the gray area interpretation into dogma are losing propositions either way. The inclusion of the thoughts of Islamic scholars makes it very Arabic in culture, often unacceptable and unbelievable, and ignoring it leaves us hugging the pillars, excluding any exegesis about gray area.

It is precisely the pillars hugging mentality that determines our obsession with the dogmatic borders, leading to our obsession with borderline issues. Most will consider it stupid if all Pakistanis were only concerned with Pakistani borders and not about mainland problems. Pakistan can not be adequately defined only as what is west, east, north and south of Pakistan. Similarly religion defined and practiced preferentially in terms of extremes or borders is wrong.

Using the idea of two extremes in every situation is simplistic and sometimes outright stupid. The biggest weakness of such a simplistic concept is its resistance to reformation (interpolation and extrapolation). It is the in-built uncertainty of the credibility of interpolation between only two data points (G for Good and B for Bad) separated by a large gray area of unknown dimensions. In India and China, sages realized the problem early on and over the centuries added new data points between G and B, in both practical and speculative areas. In Islam, scholars also filled in data points between G and B but the limitations of thoughts within the narrow bounds of core beliefs and scholars’ association often with the courts of ruling elite devised ideas that were for the benefits of elite and more suitable to Arabs than other people. Moreover, the limitations and rigidity of two extremes led to additional data points (new concepts) within close proximity of G and B and were suitable for a particular time frame only. The biased nature of additional data points and extreme nearness to G and B kept them precise but not accurate for future reformation.
When knowledge and ideas are confined too closely to narrow dogmatic concerns (restricting pertinent, unbounded evolution of thought) then the use of propaganda/marketing techniques, to enforce absolute and unquestioned submission becomes a necessity. In order to keep the faithful well away from thinking about a middle way, balanced and rational, exaggerated and obsessive controversy over borderline issues (issues which show no potential for becoming truly significant) is promoted by the self appointed custodians of Islam, and presented as a danger of immense proportion.

Think of fervid emphasis on Islamic appearance and dress code for men, a bearded face without moustache and a trouser few inches above the ankles respectively. This is worse than even borderline issue when it comes to contributing meaningfully to peace, prosperity, family, friends, society or state. Nothing but a waste of time and energies that should be spent dealing with other more important issues. What is there to gain from such an issue? Are there problems with the current appearance and dress code of Pakistani men? Not only it is a worthless and bogus issue; it is in sharp contrast to the general traditional outlook. Throughout our long history, most men were peasants. They had moustache much more often than beard and wore a piece of loincloth often above their knees. Most women also worked alongside men and more portions of their legs were visible than Islam allows. All such customs and traditions were developed to make it more manageable in a particular work environment and acute weather conditions during summer and monsoon months. All of this should not become obscene just because some 900 years ago, Mahmud Ghaznavi set his eyes at the wealth of Somnath temple. It sure did replace one clergy class with another.
The clergy class, the Mullahs, semi-Mullahs and Mullahism in general is responsible for substantial part of the blame for our obsession with borderline issues. They are more obsessed with dogmatic borders than the general public. A good example of this mindset is their definitions of Hinduism and Buddhism in terms of negative religious extremes. To them, Hindusim is nothing but idol worshipping and strict caste system whereas Buddhism is ascetic way of life, abandoning all participation in the worldly affairs. They know nothing of the philosophies of self-knowledge, self-discipline, vision, truth, dharma, karma etc of Hinduism and middle way, interdependent arising, nature of reality etc of Buddhism, the core philosophies of these two religions. The reason is simple. They do not feel it necessary to learn or accept guidance from any other source when Islam is the complete and ultimate source of wisdom. Anything contradicting their brands of Islamic concepts is not worth knowing and anything approving of their concepts from outside is unnecessary. They should have been treated like any other artisan or professional classes. They are paid for their services of leading prayers and presiding over marriage and funeral ceremonies. When a barber is not asked for his opinion about carpentry, a lawyer is not asked for prescribing medicine then why Mullahs are asked for their opinions in the areas beyond their specialty? In a free society, barbers, carpenters, lawyers and doctors all have the right to express their opinions about any issue, but to impose a particular set of ideas, they must all follow the proper channel of becoming the elected representatives-to be able to include their philosophies into laws. Mullahs do not mind of imposing their opinions because they think themselves of divinely ordained. The power politics, arms-twisting, street power and violence are all considered acceptable modes of operation for them because they think of it as performing God’s work. Our communities and society must reject their influence and restrict them to the area of their specialization.

Other weaknesses of a passionate attachment with the extremes are only the flip side of this philosophy. When the gray areas within the bounds of philosophical principles are not well filled in, the foundation itself is weak and easy to overturn. For example, the concept of a creating a society devoid of sins (narrowly and dogmatically defined), implies a small homogeneous society, and not a large and diverse one, teeming with humanity. In the past, the uncertainty over the length and breadth of the gray area had led to a different set of philosophies about the nature of absolute reality. Both extremes were completely merged into singularity as in the cases of various sects of Buddhism, Zen, Sikhism, certain branches of Sufism and non-dualism of Vedanta school of thoughts in Hinduism. No need to worry about borders when borders are indistinguishable from the main body.

A variety of structures are possible to built around core principles, the pillars, in every religion depending upon the necessity of time and place. The keys are flexibility of imagination, desire for improvement, realization of the drawbacks of the old structure, reason and rationality. Borrow material and skills freely from others but make sure to build a structure, none of Muslims feel uneasiness in identifying with it. This is what is important and not if the pillars are visible from outside or take the center space in the structure. Islamic Fundamentalists, the JI, JUI, JUP, SSP, LeT, Lashkars, Harkats, Hizbs and Mullahs disagree with it. Their obsession is with the pillars and not the renovation or remodeling the old building. The dogmatic borders and borderline issues from practical life will remain the primary concern for these folks. Their longings are for achieving (or imposing) a replica of society as closely resembling as possible of 7th century Arabia. What about those who do not wish to be part of such an experiment? Not everybody is obsessed with such an idea or with dogmatic borders. Will they be treated as equal citizen of state or delivered with the same punishment meted out to opponents, though fellow citizen, in 7th century Arabia?

Although the numbers are for South Asians but a mere division of these numbers by ten will yield a rough estimate of the number of Pakistanis facing these problems.

The pre-occupation with insignificant extremes in the name of religion is misplaced, misguided and retrogressive. It will only lead to frustration, depression and a fractured society because the fervent emphases placed on ideal Islamic principles are unachievable. A life spent for peace, harmony, reason, rationality, family, friends and society is much better than a life spent fighting for borderline issues related to dogmatic borders only. Whether obsession inspired militancy had any place in Islam is irrelevant now. Its harmful effects in the form of disorderliness and destabilization far outweigh any benefits in modern large and heterogeneous societies. Is militancy a preferred way of securing a berth in heaven after judgement day?