Philosophy of Sufism: A Study 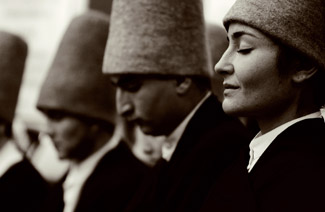 It is the characteristics of Sufism that its expressions often hold the balance between love and knowledge. An emotional form of expression more easily integrates the religious attitude, which is the starting point of all Islamic spirituality. The language of love makes it possible to enunciate the most profoundly esoteric truths without coming into conflict with dogmatic theology. Finally, the intoxication of love symbolically corresponds to states of knowledge, which go beyond discursive thought. There are also expressions, which, though not arise from an attitude of love , nonetheless evoke because they reflect an inner beauty, which is the seal, set by Unity on the soul. It is from this unity that clarity and rhythm spring, whereas any kind of mental creation and vanity of speech contradicts the simplicity and so also the transparency of the soul in relation to truth.

Some Sufi writers, such as Muhyi-d-Din Ibn ‘ Arabi, Ahmed Ibn al ‘Arif, Suhrawardi of Aleppo, al-Junayd, and Abu-l-Hasan ash-Shadhili, give evidence of an attitude which is fundamentally intellectual. These writers look on the Divine Reality as the universal essence of all knowledge. Others, such as ‘Omar Ibn al-Farid, Mansur al-hallaj, and Jalal ad-Din Rumi, express themselves in t language of love. For them the Divine Reality is, first of all, the limitless object of desire. But this diversity of attitude has nothing to do with any divergence between different schools, as some have believed who consider that the Sufis who used an intellectual language had been affected by the influence of doctrines foreign to Islam such as neo-platonism, and that only those who represent an emotional attitude are the mouthpiece of the true mysticism, which derives from the prespective of monoteism. In fact the diversity in question derives from diversity of vocation : different vocations quite naturally graft themselves on to different types of human genius and all find their place in true tasawwuf; ; the difference between an intellectual and an emotional attitude is merely the most important and the commonest of the differences that are to be found in this domain.

Hinduism, which is characterized by an extreme differentiation of spiritual methods, makes an explicit distinction between the three ways of knowledge (jnana), love (bhakti) and action (karma). This distinction is in fact to be found in every complete tradition. In Sufism the distinction of the three ways corresponds to the three main motives of aspiration towards God- knowledge or gnosis (al-ma’rifah), love (el-mahabbah) and fear (al-khawf). But Sufism tends rather to synthesis than to differentiation to these ways and in fact in “ classical” Sufism a certain equilibrium of the intellectual and emotional attitudes is noticeable. Doubtless the reason for this lies in the general structure of Islam, which is founded on at-tawhid, the doctrine of Unity, and so gives an intellectual orientation, which is imposed, on all varieties of the spiritual life. As for love, love is born spontaneously wherever the Divine Reality is felt or contemplated.

This brings us back to the opinion that only those Sufis who manifest an attitude of love truly represent the mystical aspect of Islam. In support of this opinion criteria are wrongfully applied which are valid only in relation to Christianity, the basic theme of which is Divine Love so that those who are the mouthpieces of gnosis in Christianity express themselves- though there are some rare exceptions- through the symbolism of Love. This is not the case in Islam where at every level knowledge or gnosis in no way implies an emphasis on the mind at the expense of the emotional faculties : its organ is the heart, the secret and ungraspable center of man’s being, and the radiations of knowledge penetrate into the whole sphere of the soul. A Sufi who has realized utterly “impersonal” knowledge may nonetheless make use of the language of love and reject all doctrinal dialectic ; in such a case the intoxication of love will correspond to the states of knowledge, which are beyond forms and outstrip all thoughts.

In reality the distinction between the way of knowledge and the way of love amounts to a question of the predominance of one or the other ; there is never in fact a complete separation between these two modes of spirituality. Knowledge of God always engenders love, while love presupposes knowledge of the object of love even though that knowledge may be only Divine Beauty, which is as aspect of Infinity, and through this object desire becomes lucid or clear. Full, integral love, which revolves round a single ineffable point, gives as sort of subjective infallibility that comes from knowledge , but only to all that forms part of the “personal” relationship of the adorer to his Lord. It is the object, Beauty that love virtually coincides with knowledge. In a sense Truth and Beauty are criteria of one another, although sentimental prejudices distort the concept of beauty just as, from another angle, rationalism limits truth.

It is highly significant that there is hardly a single Moslem metaphysician who did not compose poetry and whose most abstract prose is not in the passages transformed into rhythmic language full of poetic images, while, on the other hand the poetry of the most famous hymners of love, such as ‘Umar ibn al-Farid and Jalal ad-Din Rumi, is rich in intellectual perceptions.

As for the attitude of fear (al-khawf), which corresponds to the way of action, this is not directly manifested in the style of expression ; its role is an implicit one. It is true that fear stands, as it were, only at the threshold of contemplation, but, when it is spiritualized, it can none the less bring man out of the collective dream which the “world” is and bring him face to face with Eternal reality. Love is higher than fear even as knowledge is higher than love, but this is true only of direct, immediate knowledge, which outstrips reason (or discursive though), for spiritual love embraces every individual faculty and imprints each of them with the seal of Unity.

In his Mahasin al-Majalis Ahmed ibn al-Arif says that love (al-mahabbah) is “he beginning of the valleys of extinction (fana) and the hill from which there is a descent towards the stages of self-naughting (al-mahu) ; it is the last of the stages where the advance guard of the mass of believers meets the rear guard of the elect.” Muhyi-d-Din ibn ‘Arabi on the other hand considers love to be the highest station of the soul and subordinates to its every possible human perfection. This may seem strange, coming as it does from one of the most eminent of the representatives of the way of knowledge. The explanation is that, for Ibn Arabi, knowledge is not a station of the soul. In the perfection of knowledge nothing specifically human remains since such knowledge is identified with its object, the Divine Reality. In its immediate actuality knowledge can thus no longer be attributed to man or to the soul but only to God, since it no longer has any psychic outline. At the same time the most lofty station of the soul is not a psychological correlative of knowledge like prudence or veracity but is integral love, the complete absorption of the human will by the Divine attraction. It is the state of being “lost in love” of which Abraham is the human prototype. (Cf. Ibn ‘Arabi : Fusus al-Hikam)