In memory of Dr. Abdus Salam – By Professor Jogesh Pati 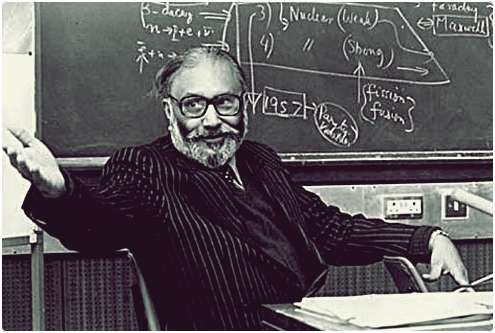 [This article was published in Physics Today (August 1997). It is being reproduced here with the permission of the author]

Abdus Salam died at age 70 on 21 November 1996, at his home in Oxford, England. He was best known for his pioneering work on electroweak unification, for which he shared the Nobel Prize in Physics in 1979 with Sheldon Glashow and Steven Weinberg. Salam will be remembered also for his invaluable contributions to the propogation of science in the third world. He founded the International Center for Theoretical Physics (ICTP) in Trieste, Italy, and directed it for over 30 years; he also helped create other international research centers, several international foundations, such as the Third World Academy of Science, and a number of international prizes.

Salam was born in Jhang, a district in the part of British India, that is now Pakistan. Known at an early age for his sharp intellect, he completed his undergraduate education at the University of the Punjab in 1946, and won a scholarship to continue his graduate studies at the University of Cambridge’s St. John’s College. He excelled there, securing a first (top honors) in both physics and mathematics. While seeking a research problem for his thesis, he asked the advice of Paul Matthews, who was about to finish his PhD. Mathews had been attempting to extend to meson theories, which describe the nuclear forces, the renormalization techniques that had recently been applied so successfully to avoid the infinities in quantum electrodynamics. Matthews challenged Salam to solve the problem of the so-called overlapping divergences, which arise in meson theories in higher orders of perturbation theory. To Matthews’s great surprise, Salam arrived at a complete solution to the problem in a few months. This thesis made Salam very well known at the beginning of his career.

After finishing his PhD at Cambridge in 1951, Salam returned to Pakistan as a professor of mathematics at the University of the Punjab, hoping to build research groups in theoretical physics in  his own country. However, he was frustrated in achieving his goals by both the lack of official support and the acute isolation in physics that he faced in Pakistan. He felt that he could serve his country better by staying abroad, so he returned to Cambridge in 1954 as a lecturer and fellow of St. John’s College. Three years later, he accepted a professorship at what is now the University of London’s Imperial College of Science, Technology and Medicine, where he succeeded in establishing one of the best theoretical physics groups in the world, well known for its contributions to the role of symmetries in particle physics. He maintained his professorship at Imperial College to the end of his career, despite spending most of his time after 1964 at the ICTP.

From 1957 to 1967, Salam, initially in collaboration with John Ward, attempted to unify the radioactive weak and electromagnetic forces -an idea introduced by Julian Schwinger in 1957. Following a suggestion by Glashow on the usefulness of the gauge symmetry SU(2)xU(1) and a crucial observation made by Peter Higgs and independently by F. Englert and R. Brout and (earlier) by Philip Anderson on how massless gauge particles can acquire masses through spontaneous breaking of symmetries, Weinberg (in 1967), and, independently Salam (in 1968) proposed a model for electroweak unification based on the idea of a spontaneously broken SU(2)xU(1) gauge symmetry.

My personal collaboration with Salam started in the summer of 1972 and remained intense for over ten years. Together, we introduced the idea of an underlying unity of quarks and leptons and, simultaneously, of gauge forces.

In 1973, despite the skepticism of the physics community at the time, Salam and I noted that a gauge unification of quarks and leptons would inevitably lead to non-conservation of baryon and lepton numbers and thereby naturally to an unstable proton. These ideas have matured and evolved considerably. Salam had hoped to see a more final chapter of this story of unification in his lifetime. We were both encouraged, however, to see that the search for proton decay was continuing with the recent completion of the Superkamiokande detector in Japan.

During our collaboration, Salam always reacted to our occasional disagreements with a good-natured spirit. If he were greatly excited about an idea that I did not like, he would impatiently ask, “My dear sir, what do you want? Blood?” I would reply, “No, Professor Salam. I would like something better.” Whether I was right or wrong, he never took it ill.

While Salam was moving forward in his research, he never lost sight of his ardent desire to help the growth of science and technology in the third world. Determined to help, he approached the International

Atomic Energy Agency (IAEA) of the United Nations in 1960 for support of what was to become the ICTP. Salam’s proposal met with great resistance, with one delegate from a developed nation saying,

“Theoretical physics is the Rolls-Royce of sciences – the developing countries need only bullock carts.” After Salam and several colleagues lobbied intensely for four years, Salam finally succeeded in creating the center in 1964, with the partial support from the IAEA (now taken over by UNESCO) and primary support from the government of Italy.

Thanks to Salam’s tireless efforts, the ICTP has emerged as one of the finest research-cum-training institutions in the world, not only producing high quality science but also providing opportunities for scientists from the developing and developed nations to interact regularly through annual workshops and summer schools. In its 33 years, the ICTP has hosted some 60,000 visits by experimental and theoretical research physicists, about half of them are from the developing countries.

Salam dreamed of creating 20 international centers like the ICTP, spread throughout the world and emphasizing different areas of science and technology. He appealed vigorously to the developed as well as the developing countries and to the World Bank for funds to create the centers. Meanwhile Salam also dreamed of creating a “World
University”, which would be funded internationally and would be linked
for its functioning to a consortium of universities worldwide.

Salam’s efforts in these directions in the last eight years of his life were unfortunately severely hampered by a crippling neurological illness, attributed to a variant of Parkinson’s disease. Thanks to his own initiative and that of several others, he nevertheless succeeded in creating the International Center for Genetic Engineering and Biotechnology, with components in Trieste and Delhi, and the International Center for Science and High Technology in Trieste.

Salam will surely be remembered as one of the great scientists of the 20th century and as a humanitarian who devoted much of his life to uplifting the status of science and technology in the third world. Salam may have been somewhat ahead of his time in dreaming of 20 international centers and a world university. It remains for the present generation of scientists and world leaders to fulfill thisdream.