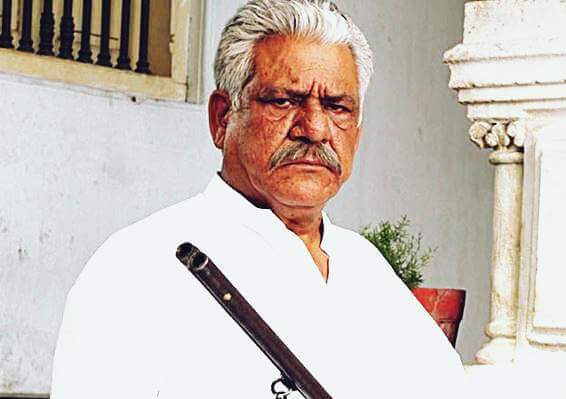 Mr. Puri was touring with his film East is East

It is 10 Am and I have been waiting for at least an hour for his phone call.

OP: Hello. May I speak to Saniya Ansari? Hello?

SA: Yes, speaking. Om, Mr. Puri, I’m so glad you called. I also left a message at your hotel.

OP: You did? I don’t
know how to check messages. Sorry, I got stuck at Star-bucks.

SA: Mr. Puri, the first question I would like to ask is how your family influenced your work as an actor? Do you come from an artistic background?

OP: No. My father served in the British army. I grew up in Patiala where I did my BA in Political Science. After, I connected with a couple that created plays with social relevance. That got my interest in acting and I went to Delhi’s drama school and after that to Puna institute for 2 years. My father never objected. That was my family’s influence.

SA: Indian Art Films made you most popular with specific audiences, directors and actors. There are some bitter actors who believe that the art scene was a rip-off because of its limited market, lack of stardom and short life-span. How did you feel as an actor about the distinction between art and commercial film?

OP: I landed in Bombay in the mid-70s without any connections or allusions about my looks. Therefore, did not aspire to become a Bollywood hero. I started teaching acting in Bombay to earn money and started a theatre company called Majma. In 1981, Govind Nehlani’s Aakosh was my introduction to the art films in India and to the director Satayajit Ray. This also led to my role in Attenborough’s Gandhi. And in 1984 Arb Satya (Half Truth) a film by the same director was a huge commercial success.

OP: Yes, Govind Nehlani same director…with rain and dancing and me as a full hero, it did very well at the box office. The film introduced me as a hero and it gave me financial stability: a house, a car and the hope to survive as an actor in Bombay. Art Cinema gave me status, respect and international recognition as the films traveled to various film festivals and Commercial films gave me financial stability.

OP: In America, my visits are wonderful. After travelling to big and small cities I find smaller cities are much more warmer and relaxed in comparison to New York. City of Joy was my first American film, which brought me to only Los Angles and New York. But because of East is East I have toured with the film to Minni-polis and San Francisco. In Minni-polis for instance a white man recognized me in an elevator from the film My Son the Fanatic.

SA: But last night you said that people recognize you all the time in New York City?

OP: Yes, those are people from our country.

SA: Do you miss Bollywood when you work in Hollywood?

OP: While working NO. But once the work is over I feel home sick and miss my country. Without work I feel lost, I can’t hang around here. Don’t get me wrong, it is very civilized here but I find it too synthetic. I’m conditioned to the rusticity of India since childhood. You can’t do much about that.

SA: Working with International directors and scripts what have you discovered about issues concerning South Asians living abroad?

OP: Fortunately the subject in the films is not narrow minded. The films have been screened in France, Boston, Toronto….and I have found that the response to the films from diverse audience is unanimously similar. People from various cultures have identified with the subject, and that is because these international films do not exist in isolation. All big cities are multicultural therefore the films are significant.

SA: How is your international work shaping your reputation in India?

OP: They do care. There is a noise and a lot of curiosity but that’s about it. They don’t know what to make of it when I show them my fabulous reviews for My Son the Fanatic that MiraMax was so kind to send to me. Press in India has been very kind to me and I have consciously not publicized myself in India. I have never worked for the cover of Stardust or other filmy press, it is just not important to me. I have joked with them and asked “how much do you charge for the cover…”( he laughs.)

SA: Other than acting have you ever thought about directing, producing or writing?

OP: Other than acting I think I can only be best as a farmer.

OP: Its not the same. Uff too busy, too much.

SA: How do you feel about the new “heightened” emphasis in Bollywood films such as Sarfaroosh and Pukaar on Pakistan’s role as an enemy?

OP: It is very very sad. Very sad. The propaganda is incredible. Just before its release they re-shot parts of Pukaar to include the Kargil issue, a film that was being shot for the last 2 years. And some of us did not even know about it until its release. These policies of confrontation whether cultural or political between the two countries is wrong. I want to go to Lahore and see the other side of Punjab. When I was working in London shooting My Son….I felt like eating bindi (okra)…In South Hall a Pakistani selling vegetables would not take money from me because he said I was his brother.

SA: One can imagine Qawali, Lata or Madam Noor Jehan as the backdrop music for a South Asian man. In My Son the Fanatic, you embraced Jazz music beautifully. How did that work for you?

OP: The music was Hanif’s idea. It worked really well. It gave the character a sense of freedom, a positive touch but at the same time it was sad because he was LONELY.

OP: Bollywood Calling, it’s in English from India by the same director who made Hyderabad Blues. It’s a spoof on Bollywood. And then just in this trip I signed a film, which will be shot in Wales this September.

SA: Last question, how did you manage to remain so humble in your approach. So simple and yet so elegant when in fact we know that stardom can sometimes have the most crippling effect on people’s growth as an artist like Mr. Bachan?

OP: You have said it. Sanity is very important to me. The moment you don’t interact with people or lose touch with your environment you don’t grow. I want to grow.

SA: Om thank you, this was really enjoyable.