Importance of Statistics and Statistical Analysis 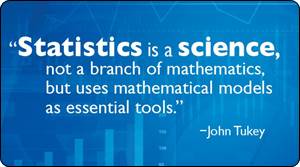 The word statistics comes from the Latin word status meaning a political state, it originally meant information useful to the state, for example, information about the sizes of population of the armed forces. But this word has acquired different meanings.

It is defined as a discipline that includes procedure and techniques used to collect, process and analyze numerical data to make inferences and to reach decisions in the face of uncertainty. Statistics are the numerical quantities calculated from sample observation, a single quantity that has been calculated is called a statistic.

As a subject statistics can be divided into two parts:

Descriptive statistics is that branch of statistics which deals with concepts and methods concerned with summarization and description of the important aspects of numerical data. This area of study consists of the condensation of data, their graphical displays and the computation of a few numerical quantities that provide information about the centre of the data and indicate the spread of the observations.

Inferential statistics deals with procedures for making inferences about the characteristics that describe the larger group of data or the whole, called the population, from the knowledge derived from only a part of the data, called a sample.