People were walking towards the bazar every Sunday. Aima was standing at the terrace looking down towards them. It was the early morning. Sun appeared from the shadow of the horizon, brightly, creating an image in the mind of Aima. She was very interested in knowing about formation of sun and functioning of nature. She was the kind of girl who loved to contemplate about nature and had a firm belief that nature console people miseries as it has the spiritual essence.

She also thought that how ungrateful we human beings are. She pondered that human beings neglect small mundane things near them. Whenever, she visited some park, garden or any other place she observed the minute things walking of the ants on the wall, dancing of the flowers, and little tiny drops of water on leaves; she listened to echo of sounds in nature as she dropped the pebble in the river or water stream to check the effect of nature upon it. Therefore, her imaginative skills were very sharp; she loved to reason things.

Similarly, she had the habit of hanging at her terrace every dawn and dusk. There she contemplated the processing of natural function and organizations of the natural order of this world. Then, she looked at the time when sun sets and darkness prevail with the purple lightening all across the sky. Day by day, she observed new kind of changes.

One morning early at 6 after Fajar prayer when she came out of her balcony she was stunned by the horrifying account of black coal like smoke reaching the heights of horizon. She looked down and see that these smoke was generated from the vehicles, automobiles and trucks; there were also the working industries besides the street, she was shocked on seeing that this smoke collided with the fog that was there on the terrace. 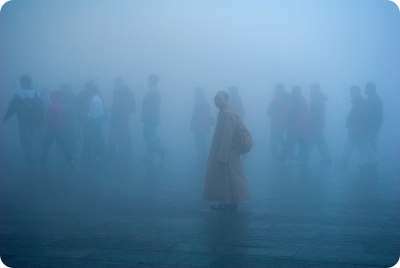 This sudden collapse makes things weird. Aima saw that smoke rose above collided with the fog that was at her terrace and she also witnessed that this smoke reaching above her terrace to the high layer of horizon and then came back downward with sharp and terrible effects, people were dwindled everywhere.

Aima then again looked down; the mixture of fog and smoke that now becomes smog “black smog”, entered into the throats of the people from their nose and oral cavity. They sneezed, coughed, some running and the car came swiftly and crushed the people because car driver was blinded by black smoke screens. There were only blood, darkness and chaos on the streets.

By, seeing this Aima closed the door of balcony since she was really depressed and heart wrenched, as she could not be able to see the nature again.

Photo by Evgeny Nelmin on Unsplash