Faiz Ahmed Faiz is often regarded as a poet of Nazam, not Ghazal. However, his few ghazals are regarded as one of the greatest ever penned. Most of the classic poets like Ghalib, Mir Taqi Mir, Momon Khan Momin and Daagh uses Ghazil as the medium of poetry. Ghazal is basically couplets, which are odd in number, usually 5, 7, 9 etc. The second shair or verse rhymes. It is usually love poetry, and don’t have a title. Nazm has a title and a theme, and allows much more freedom as rhyming remain optional.

There are a few great ghazals Faiz wrote, one we were producing below. Since it lacks a political theme, Urdu text books writers were quite comfortable to include it in their curriculum of Matric. It is not surprising that remains Faiz’s most well known poems, although his more darker and poignant poems like Subh-e-Azadi should also be included in the text books.

Worldly Idols have raised fear in hearts, that fear of God no longer exists.
Every day is like Judgement days, that thought of real Judgement Day has gone. 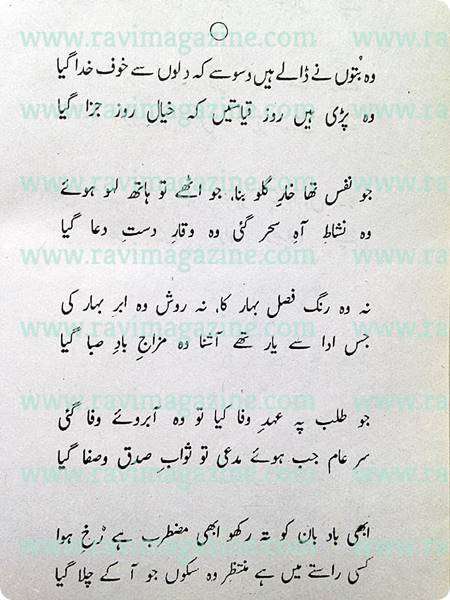