Vishwamitra: In Kalam of Allama Iqbal – By Prof. M. Hassan 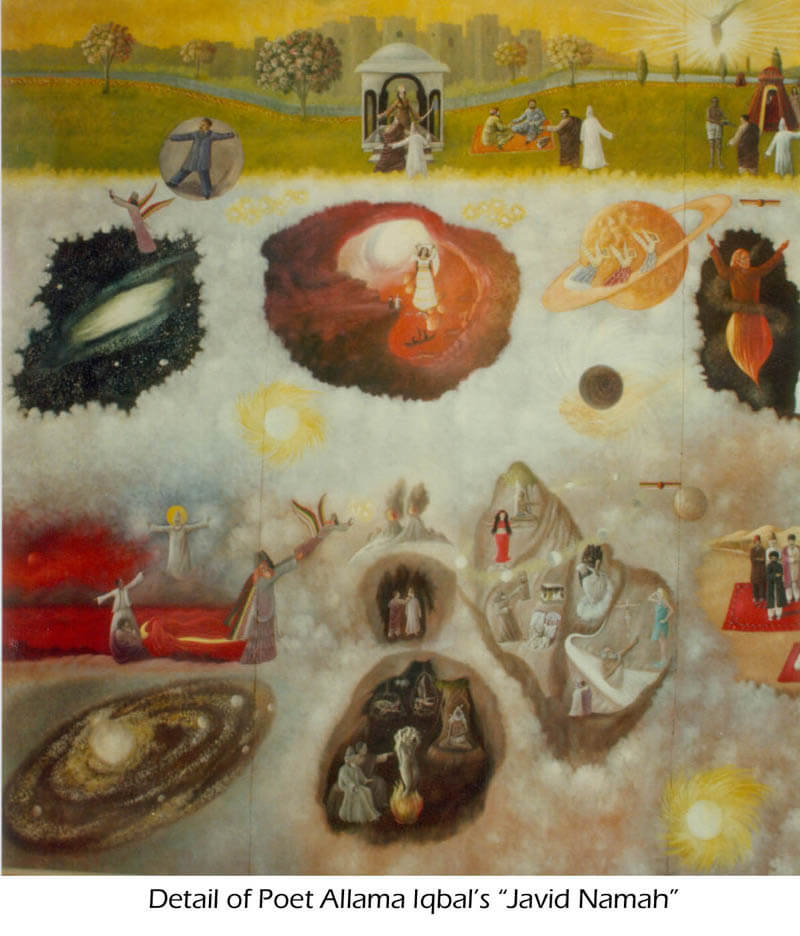 Vishwamitra was an Indian sage in the ancient times. He was the tutor of Ram. He lived the life of a hermit in a forest near Bijnor in the state of Uttar Pradesh in India. He was a Rishi, and he had vowed that he would never go near a woman. He was tempted by a beautiful woman Menaka who was as beautiful as the moon. One day Menaka came to the Ashram to seek the blessings of the sage. As the wind stirred her gossamer draperies, and revealed the fairness of her limbs the sage was tempted, and he asked her to stay with him. She agreed and they lived as husband and wife. Menaka died giving birth to a daughter. Vishwamitra re­alised that he had sinned. He abandoned the child. According to legend the child was reared by a pair of sakuntas. The girl came to be called Sakuntala. The sakuntas were legendary birds which flourished in India at that period.

In their celestial journey in ‘Javid Nama’, Iqbal and Rumi meet the spirit of Vishwamitra on the moon, whom they call ‘Jahan Dost’.
The Indian ascetic lived in a cavern of the moon. Like a blind man with his hand on the shoulder of Rumi, Iqbal placed his foot within the deep cavern. According to Iqbal no cerulean sky spanned the moon. No twilight painted Its margin crimson and gold. In the words of Iqbal: “there light was not in the chains of darkness, there no mists enveloped dawn and eventide”.

The eyes of the Indian sage were bright with collyrium. His hair was knotted on his head. His body was naked. A white snake coiled around his body.

The Indian sage recognised Rumi, but he did not know Iqbal. About Iqbal he enquired from Rumi—

“Who is your fellow traveller?

In his glance there is desire for life!”

Rumi introduced Iqbal in the following terms:
“He is a seeker of the Truth. His flights of thought are as lofty as the flights of Gabriel. In his imagination he can penetrate to the sun, the moon, and the planets. He has a flame in him, and there is majestic pride in his prostration. He laments yearningly for God, but he neither wants to be separated nor to be united to God. I am still to understand him. I do not know what is his exact station”.

“The world is a thing of colour, and God is without colour,

What is the world?

“Man is a sword; God is the swordsman; and the world is a whet­stone for this sword”.

The implication is that Man is only an agent of God, and the world has been created so that Man may fulfil the purpose of agency.

“The East has got itself involved in the knot of being and not being and has not been able to unravel the secrets. But the time Is fast coming when the East will arise and make its mark”.

Thereafter the Indian sage turned to Iqbal, and asked him a few subtle questions.

What was the body asked the sage, and Iqbal said that it was born of the dust of the road.

What was the Soul was the next question, and Iqbal said that it was the symbol of one God.

What was Man asked the sage, and Iqbal said that Man was one of God’s secrets.

What was the world was the next question, and Iqbal said that it stood face to face.

What was science and art enquired the sage and Iqbal said that these were mere husk.

What was the proof asked the sage, and Iqbal said that the proof was the face of the beloved.

What was the commons* religion asked the sage and Iqbal said that it was just hearsay.

And what was the gnostics’ religion to which Iqbal replied that it was true seeing.

The sage was well pleased with the replies of Iqbai.

Thereafter the sage spoke some subtle words of wisdom. He said:

“The world is not a veil over the essence of God.

Conquer Time and Space and be immortal.

We know more of the science of death than God.

Time is a sweet mingled with poison.

“The infidel with a wakeful heart praying co an idol is better than a religious man asleep in the sanctuary.”

“The sun never beholds the night; a man of God never sees sin and error.”

“Mire makes the seed a tree, but It makes a man dirty.’*

“Just as the rose takes colour and scent from the wind and the earth, thus should a man make his life purposeful.”