Syria has been the nexus of brutality and terror for almost a decade now; with more than 6 million natives who have already fled and numerous displaced over the territory itself, the region casts a ghastly shade that has only turned grimmer with time. Although the conflict seemingly raved its catastrophic footprint in early 2000, the root cause arguably always ends up to be the infamous ‘Arab Spring’ that actually tuned the Syrians against their very own regime. Something to compare and contrast that communal unity acted in Iraq’s benefit back when USA invaded the territory to avenge the 9/11 Attacks in 2003 while casted a fiasco in Syria when invaded in 2014.

Large scale protests and rampaging violence gradually morphed into a series of relentless efforts to first deter Bashar Al-Asad’s efforts to first peacefully and then collaboratively resolving the raging unrest. Some would say it was inspired by the historical besiege of Libya and the subsequent execution of the Libyan prime minister Muammar al-Gaddafi as an ensue of that revolution yet Bashar Al-Asad proved a far more tensile force to overthrow. Such tumultuous turn of events, lead Syria to first economic sanctions followed by severe isolation in the global community opposing and downright rejecting Assad’s actions to curb the political tremors. Yet intermittent interventions, both implicit and explicit, by the western powers and their counter-parts have defined the region more as a battle ground of mercenary motives instead of mere efforts to safeguard human rights and ensuring regional peace.

Since 2011, 3 core actors have remained active in skirmishes that have more oftener than not transformed into battles of gore and toil and sometimes even full-fledged wars that have not only dismembered the expanse of over an 185,000 km2  of land into mounds of dust and rubble with terror now crawling over the lanes but have even shuddered the immediate vicinity. With the downfall and perpetual dissipation of ISIS, losing much of its occupied land to active contenders, Assad’s militia and Kurdish forces remain the helming competitors along with a smattering of other oppositions like Jaish al Fateh and Nusrta Front.

The conflict between the Kurdish forces backed by the US regime against ISIS and then eventual betrayal on the Turkish front had been a matter of contentions in the latter part of 2019; Kurds making it abundantly clear to harness the borders they surmise to be rightly theirs while Turkish policies, especially under Turkish President Recep Tayyip Erdoğan, have been outright fearless and needless of any other inference regarding their austere stance over the issue; claiming their bordering territories and inferring stern response in case of any dissension caused by the Kurds. 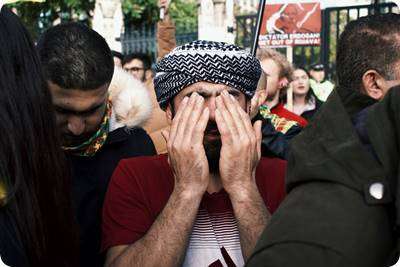 However, the outlining threat in the recent time can be perceived at a novel yet a totally realistic stage, where proxy wars no longer remain the ground reality of armed unrest in Syria. This notion has arisen since harsh words were exchanged between Moscow and Ankara; the metropolis’ of the neighbouring giants: Russia and Turkey respectively. A glimpse in the historical scaffolding of the entire Syrian conflict, Russia has always backed Assad’s regime despite its initial block over Syrian policies revolving over strategies to deal with the blooming protests in the early tremors of the Arab Spring who’s effects had started to resonate in the entire Middle East following up on Ground 0, Tunisia.

The vantage point of Russia, however, shifted when the political paradigm was drastically nudged by the terror-driven escalation of ISIS after severe US blunders and baffling retreat from Syria that even threatened the sovereignty and security of the region following their besiege of the state of Raqqa, establishing ISIS as a looming concern, thereby aligning the aims of both Russian reign and Assad’s regime, ultimately inciting a continued alliance. Turkey, on the other hand, being the northern neighbour to Syria also contended as a root protagonist in economic isolation of Assad’s government, imposing stringent financial sanctions that tightened the bottlenecks and eventually led to the deterioration of their financial virility that already staggered after sanctions and embargos placed by both EU and USA.

This conflict that permeates in the north-western terrain of Syria lilts an innuendo that a spark may be brewing between the two nations. The besieged province of Idlib exudes the source of the strife; an area that has witnessed countless Turkish troops slain by Assad’s forces in cross-border disputes; close to seven Turkish soldiers were recently killed in a thorough retaliation of Syrian forces in the de-escalation zone, much to Turkey’s dismay. However, the Russian involvement in backing the Syrian government in their dissent in Idlib and heavily bombing of the territory with artillery servers as a link to presumably leading a head-on conflict between Russia and Turkey; hinted by Erdoğan that any effort made in the region will not go answered, clearly warning the Russian forces to avoid any transgression that could cause fatality to their personnel.

The people of Syria, blended with the rebels, look in the eye of a dead end; Bombardement to deter the tyrants have shredded their innocent bodies similar to the incursions in Eastern Ghouta and with no one on their side but with ulterior incentives, they are left with no choice but to see Turkey as a savior. To any sane mind, however, it’s not really a complex interface of modes and interests involved. With clash of alliances, historical narrative of both the world wars fought, coherently brings about the model of war despite a never-ending argument at whim. Without contesting any theory by any analyst, it’s imperative to gauge at the systematic progression of the tensions flowing yet not mitigating. Turkey being stranded from its western allies and Arab assistance in wake of the murder conspiracy and being locked in a bound-to-doom NATO relation with Russia, the outcome of this steady conflict can bring about equal amount of damage yet in lesser of a decade and more pandemic effects.