On May 22nd,196- at 15:11 (local time at Chile) in afternoon, the strongest ever earthquake in the earth’s history shook Chile. The massive earthquake not only impacted cities in Chile such as Puerto Montt and Valdivia, but the impact of the natural hazard was felt across the Pacific Ocean in countries that were damaged by catastrophe tsunami triggered by the earthquake. This earthquake shook the entire world and caused widespread destruction and casualties. Epicenter was Lumaco, approximately 570km south of Santiago. Because of The Great Chilean Earthquake’s power and global effect, I selected this event to research. 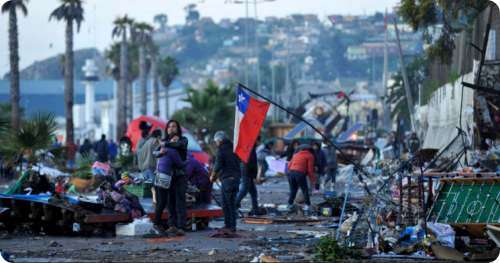 Chile lies over the Nazca Plate and the South American Plate. For thousands of years there has bee a subduction zone between the two plates with the Nazca Plate subducting beneath the South American Plate. It is the subduction zone. And subductions zones are known to produce strongest earthquakes on earth, as these structures allows more stress to build-up before energy is released. On this date, tension built up at the subduction zone and was release when the Nazca Plate moved 15 meters under the South American Plate. Typically, the Nazca Plate moves only nine centimeters a year, but a large sudden amount of movement and tension resulted in 9.5 magnitude earthquake on the moment magnitude scale according to the US Geological Survey. As the Nazca Plate moved, a large amount of water in the Pacific Ocean also moved with the force of a magnitude 9.5 earthquake pushing the tsunami hundreds of miles away. The waves were pushed across the Pacific Ocean and capsized the shores of Hawaii, Japan, Australia, California, and New Zealand. Chile was also impacted by a tsunami. In less than fifteen after the earthquake, Valdivia was hit by a tsunami with a twenty-five-meter wave. Then it was followed by one of the waves of eleven meters high. This was disastrous.

The earthquake caused another secondary effect: landslides across Chile, they were so severe that some even changed the course of the rivers. Enormous flows of debris and water from both the earthquake and tsunami rushed across the Chilean landscape causing floods. Also, on May 24th, 1960 Volcano Puyehue erupted. Ash was sent up 6000 meters in the air for several days. Although the eruption occurred just two days after the earthquake, scientists aren’t positive if there is a correlation between the two events. However, it is known that the Nazca Plate subducted beneath the South American Plate on May 22nd, 1960. Hence, it caused more than just the earthquake.

The great Chilean earthquake of 1960 caused extensive damage across the globe. The total damage around the world cost $550 million in deaths and repairing damage. Monetary cost ranged from US $400 million to $800 million. 2 million people got homeless and 3000 people got injured. Moreover, there were uncountable deaths.140 people got killed in Japan, 61 people in Hawaii and 32 in Philippines. Although Chile is an earthquake prone area, the buildings weren’t properly prepared for an earthquake of this high magnitude. Buildings collapsed from shaking and one out of every three buildings in Valdivia was destroyed. The Chilean government reported that 58,622 homes were demolished. The blow to Chile’s economy was also very damaging, especially for the coastal town Queule which had just begun to thrive during the 150s. In 1959 Chilean economy’s GDP was decreasing by 8% which recovered in 1960 with a growth of 6% GDP. But unluckily after the earthquake the GDP went lower at 2%. The town’s agricultural industry was destroyed because farms and livestock were wiped out. Many small farm towns were faced with reconstruction and were hence never able to return to their thriving state and were forced into economic decline.

In Hawaii, the city of Hilo was most impacted by the tsunami because of its position at the coast, and with the tsunami moving across the Pacific Ocean at a speed of up to 200 miles per hour, hence the city was devastated. It took twenty-two hours for the tsunami to reach Japan.

The most damage from this natural hazard was caused by the tsunami, nevertheless considerable damage was done by the landslides that occurred after, shortly. Luckily, the greatest landslides occurred in rural areas so there was no significant damage to route 215-CH, a major highway that connects to Argentina. The debris from the landslide blocked the Rinihue Lake. When the water flooded and burst through the dam, Puyehue Lake also flooded, destroying the nearby major highway. Overall, the landslides caused no such big casualties than the tsunami and earthquake Not even volcanic eruption because the volcano was located between two unpopulated valleys. An emergency committee was formed to solve the problems. In 1974, the committee was officially named ONEMI, in Spanish it stands for National Emergency and Information Office. It still works to help deal with the aftermaths of natural hazards.

Lastly, the magnitude 9.5 earthquake was proceeded by four foreshocks with a magnitude of 7.0 or higher. This caused people to run out of buildings so when the aftershocks came, people were already out of the buildings on the streets. Hence, the Nazca Plate and South American Plate reside there making Chile an earthquake prone country.