Pakistan’s Nuclear Deterrent – A Bluff Or A Reality – Khalid Rehman

In year 2018, the then Indian Army Chief, General Bipin Rawat (now their Chief of Défense Staff) called Pakistan’s nuclear capability a bluff and stated that they can cross Pakistan’s border if asked by the Indian leadership. While his first statement was still under criticism, he issued another one underscoring that India is vulnerable to nuclear / chemical attack by terrorists. The driving force which compelled the Indian Army Chief, to utter such irresponsible and provocative words, which attempted to undermine the nuclear deterrence in South Asia and doubted the safety of Pakistan’s nuclear assts, is yet to be determined. Having received a due response from Pakistan’s DG ISPR and Foreign Minister, it cannot be declared a routine statement of Indian Army chief. There is a need to explore and expose the driving force behind these statements.

The discussion will result into raising a few questions regarding the attitude and decisions of Indian military in past and few realities which may have triggered this provoking attitude on Indian side. Firstly both the statements are contradictory to each other. If the nuclear capability was a bluff, then why Indian’s are fearful of falling a bluff into the hands of terrorists, conversely, if they fear the falling of the same thing into terrorist’s hands, then it is not a bluff.

The next question, that rises, is on the Indian Cold Strat Doctrine and Pro Active Operations strategy, both of which had been planned on the punch lines of “remaining under the nuclear threshold” and implemented after being subjected to huge number of war games and military exercises. But if the nuclear capability does not actually exist with Pakistan, then it will surmount to the fact that Indians have based their above mentioned strategies on mere assumptions, if so, a huge bluff on their part. Indian military leadership will have to justify to their nation, the time wastage and expenditures incurred on war games, military exercises and their final implementations i.e forward shifting of cantonments etc. 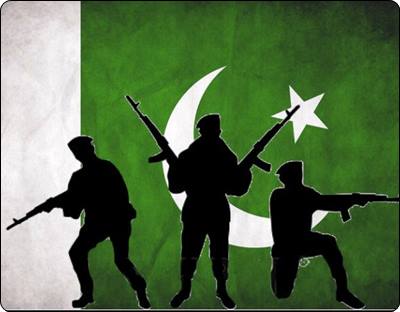 The second most important question rises on efficiency of Indian Intelligence agencies, which were unable to confirm the presence or otherwise of Pakistan’s nuclear capabilities in last 19 years. If this was the case, they are urgently required to be audited by their nation.

Nuclear deterrence is the main reason which always thwarts the chances of a major war among states. Same is the case in South Asia. Had there been no nuclear deterrent, why India was unable to launch a full scale offensive after its complete deployment of forces on Pakistan’s border in 2001-02 escalation, the largest military mobilization after WW-2.

Terrorist activities inside India, whether actual or stage managed, resulted in the creation of war hysteria by Indian military, political leadership and media. Such theaters were continuously played by Indians including Uri attacks, Mumbai attacks and few other occasions. Despite their intense desires and hegemonic designs coupled with the fact that Pakistan’s most of the conventional forces were busy fighting terrorism along its Western border, India could not attempt to wage war, even once. What was that great fear which took away their courage to do so? Probably it was the same thing which they call a ‘Bluff’.

After being embarrassed in so called surgical strikes, Indian military leadership recently tried to develop their confidence in a military exercise in desert sector. The exercise was again based on “subjecting Pakistan to multiple thrusts while remaining below the nuclear threshold”. If it at all Pakistan’s nuclear capability was a bluff, then from where the nuclear threshold came in? The success of the exercise may have made the Indian Army Chief confident and provoked him to break his silence. But the silence was broken in a provoking and immature way.

Pressurizing the mother and wife of Indian terrorist and RAW agent Kulbhoshan Yadav, worked as for as keeping them quite was aimed. But it did not work with a well trained and experienced officer Yadav himself. He in his video message openly bashed Indian Armed forces and government for pressurizing his family. He also openly accepted whatever he has been doing in Pakistan and requested India to at least accept him as their military officer. This brought an international level embarrassment to India and its military and intelligence agencies. Statement of Indian Army Chief may be an attempt to dissolve this embarrassment or to divert the attention of his nation.

Among Indian failures on all fronts, one is the fact that Iran has understood the Indian desire of keeping Afghanistan unstable and troubled, which is never in Iran’s favour. Similarly, Iran has also realized that the Indian attempts to bring Gawadar and Chabahar at competition with each other, will harm Iran due to the fact that, successful operation of Gawadar will leave Chabahar with a very little share in regional economy. This realization is slowly distancing Iran from India’s destabilizing policy, which is very frustrating reality for the later.

As a human physiology, a person who does not possess depth in his personality is unable to withstand the pressures of a sudden happiness, success or an unexpected loss. Such a person, if receives extraordinary or more than expected value or assistance from someone influential, finds himself uncontrollable in transforming his thoughts into words. Keeping in sight, the sudden US inclination towards India and provision of a large amount of arms and equipment, probably it was a moment for a depthless person to remain quiet and respected, instead of speaking and exposing himself.

The second statement obviously seems to be in continuation to few statements of US top civil and military officials questioning the safety of Pakistan’s nuclear assets and the consequences of those landing into the hands of terrorists. However, this speculation has already been responded by Pakistan stating that its nuclear assets were always in safe hands.

Last but not the least is the statement of Indian politicians warning Indian Army Chief to mind his own business. It’s an embarrassing slap on your face when somebody, from within your own house, openly contradicts you. So before uttering something, it is always advisable to first develop a consensus among your own house to avoid embarrassment at later stages. To summarize, Indian Political and Military leadership should behave sensibly and maturely, as escalation of the situation and destabilization in the region will never go in their favour.