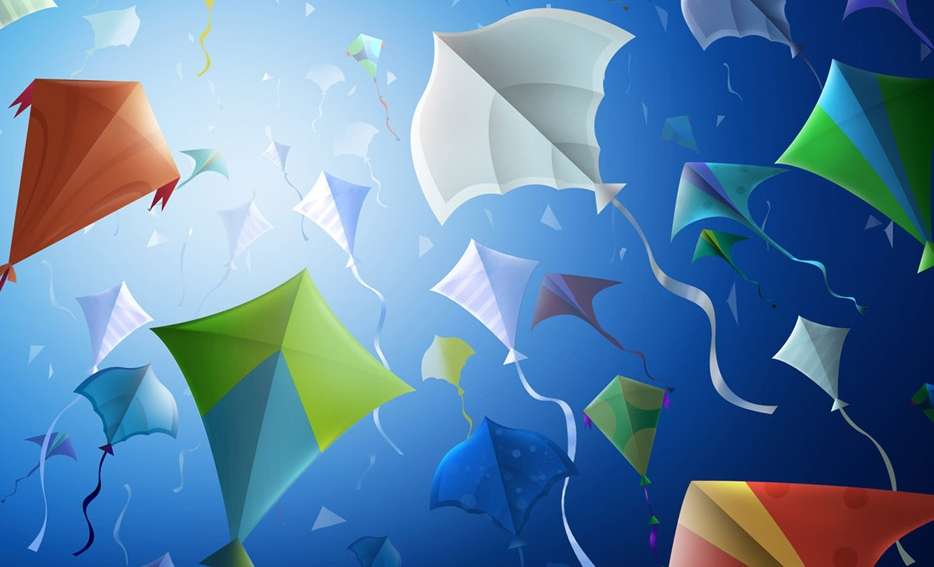 Early last month, Lahore celebrated Basant and the sky had thousands of kites in the sky for many days running. Marking
the start of spring, Basant has in many ways become the biggest festival in Pakistan in the last five or six years, surpassing in gaiety even the two Ids. Corporates compete to provide sponsorship, hotels are full with the Pakistani diaspora and double their usual tarrif, people throng at food plazas and, of course, the shops are busy selling kites with such names as the Kala Ghoda (black horse). In kite flying (no pun intended) the Pakistanis are many steps ahead of their Indian counterparts. The Kala Ghoda, for instance, is ten times the size of the biggest Indian kite. Various innovations have developed as well in the art. Metal wires to fly the kites instead of the traditional manjha and even thin plastic wires that sell by the kilo.

The revelers gather on rooftops beating drums, bursting crackers and even firing machine pistols in the air. They then get down to the serious business of having aerial, kite skirmishes. A kite going down is followed by yells of “Bo-Kata”, quite similar to the Calcutta kite cry. Loud music follows and the upper middle class hops from one party to the other. House owners with big and well placed roofs rent them out for the two-day festival at exhorbitant rates. Of course, the festivity is a high risk activity. Using metal wires is illegal as it leads to electrocution but usage is high as it’s impossible to cut-down these kites in the air. In Lahore itself, police figures suggest that 17 people died and 600 were injured, many trying to loot the stray kites.

Though this time around rain intervened to dampen spirits a bit, the Lahoris continued flying kites even in the night, using high powered search lights to spot other kites. Even President Musharraf graced Lahore to join in the festivities. By the way I intend to return to Lahore next year for Basant with a team of patang bazzez from India and have an Indo-Pak kite skirmish. Inshallah.

I guess enough has been written about this place on India’s last cricket tour to Pakistan but it needs more space. Cooco’s Den is a restaurant opposite the famous 350-year-old Badshahi mosque in Lahore’s old Heera Mandi quarter, the red light area of the city. Over three floors the top tiers afford a grand view of the mosque. The ground floor itself is adorned by paintings of Iqbal Hussain, the 1950 born owner of the restaurant. Hussain took up painting in 1971 and has had several exhibitions, one running in Mumbai currently. He specializes in painting nudes, specially scenes from the Heera mandi of the past. Hussain started the restaurant itself in 1995 to support the 22 members of his extended family, including his 90-year-old mother and it averages about 300 people a day. He and his family stay in the same premises, a house that his mother got in a claim for property they lost in Patiala. Recent registration documents reveal that the name of the house was “Holy Castle”. Hussain laments that he doesn’t really know who it belonged too originally as nobody ever wrote or came by for a visit. But as part of the restaurant’s ambience Hussain has installed on the walls deities of Hindu Gods and goddesses. So you have Lord Hanuman, Ganesha and tiles of Lord Ram and Sita competing for space and on one side a statue of Mother Mary.

There are dozens of diyas which are lit up infront of the Gods and even bells. Everything has not been smooth flowing, however. There have been complaints from mullahs in the Badshahi mosque that often the ringing of bells coincides with the call for prayers. Some mullahs have visited the restaurant and while they offered their prayers they had to look up at the marble visage of Hanuman. They muttered under their breath but nothing happened. Says Hussain, “I respect all faiths. After the Babri masjid went down lots of temples in Pakistan came under violence. I offered to take in any statue of any Hindu God or Goddess if it came on the market. They know that I will buy them so they come to me for I don’t want any disrespect shown to them.”

Interestingly, according to Hussain his mother tells him that his father was a Hindu pandit. A singer of big, local fame.

There are about 30,000 Sikhs in Pakistan and the fifth guru Sri Arjun Devji’s spot of martyrdom is adjacent to the Badshahi mosque. Known locally as the Dera Saheb it stands there since 1619 and since 1839 also has within its perimeters the Maharana Ranjit Singh memorial.
Local police guard the entrance to the Dera sahib quite strictly, not letting any Pakistani through. Even while I was there I saw about a dozen, curious, Pakistanis turned back from the gates. Interestingly, there is no restriction on Pakistanis to visit the shrine on the part of the Gurudwara management. It’s the government of Pakistan, which funds the expenses of the Gurudwara, that for some unknown reason halts local Muslims from coming in. A pity. There are 17 salaried people looking after the premises and many rooms for the visiting piligrims. Also, a great view of the Badshahi mosque from the upper ramparts of the Gurudwara.

It’s high time the so called Confidence Building measures (CBMs) were speeded up between India and Pakistan and the obnoxious practice of police reporting was stopped. I found out on my eight day in Pakistan that I had overshot my time frame for reporting to the specified police station by about a week. Panicking, I called up the Jang editor Mahmood Sham and he promptly deputed a crime reporter from Lahore to accompany me to the police station and ’sort’ things out. It took all off five minutes but the situation may have become tricky for somebody with no mai-baap like Shamji.