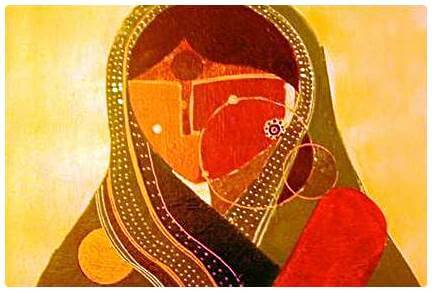 Nipa Chowrangi – By S. Minhas
The neighbors couldn’t hear her screaming over the sound of the building’s generator, so that particular Sunday Aslam was able to beat Tehmina for considerably longer than he usually did. His luck was running true that night. She slumped unconscious long before the power supply to their apartment

That, Aslam thought as he came onto the landing to smoke- he didn’t like the smell of tobacco lingering in the house, noxious fumes and dust hung in the air from the traffic congesting the city, a man’s home at least should be his sanctuary- that was what life was all about. The little pleasures. There were other men on the landing, from the apartment across, the one adjacent too, but they hurried back inside as he lit his Gold Leaf. He was undisputed Emir of the dominion of the landing, resting his calloused, walnut brown hands on the railing, the knuckles already mottling, he looked down at the driveway five stories below.

The driveway to the parking lot on the lowest level ran around the side of the building, so he could not see the mechanized jaws ripping into the road outside, the glare of the halogen lamps lighting the men laboring alongside, sweat soaked, tattered clothing clinging to their muscled legs. During their infrequent tea breaks they would crouch under makeshift shelters in the lee of the flyover taking shape over them, backlit by the neon lights of the appliance showrooms lining the other side of the road. Washing machines, televisions, geysers, microwaves visible, then obscured behind them as ribbons of traffic undulated with the passage of time.

It was half past nine, but downstairs children still skipped and trilled, threading in an out of the parked cars like beads on a string. Aslam though that parents who let their children stay awake past eight on weekdays were bad parents. When he had children, he would make sure they were in bed on time. They would learn to sleep with the sound of the generator roaring at them; they would adapt. That was what being human meant. Adapting. Much, Aslam thought, like everyone in his building had.

The engineers, the lawyers, the copywriters, the actors, the teachers, the salesmen, the mothers, all the vermin disgorged from open doors early in the morning to commute to work, school, play, procrastination had learnt to forget blue sky and clean air, birdsong and grass. And if the scent of sea air tickled their noses in their sleep, they would rise in the morning, and forget all over again. And the children born in these concrete pens, licked by tar in the womb itself, they knew sulphur as an ally.

The generator sputtered briefly, and in the millisecond lull he though he heard the sound of wood hitting flesh, then a scream. Craning his neck he could just make out Ifti, the youngster from upstairs driving his younger brother before him into the stairwell with his bat, a goat herder punishing an errant charge.

Ifti looked up as they passed directly below him to enter their block, and Aslam nodded his approval. The boy stopped. Then, holding Aslam’s gaze spat on the floor before disappearing from view.

Aslam felt he had been punched in the stomach. Tehmina had done that once, early on, before he’d broken her. Who did this Ifti think he was? He had to be taught a lesson. There was a cat he stroked sometimes; Ifti did, when he thought no one was looking. He would poison it. Nobody would know what happened to it, except Ifti. He would know. He had that streak. There was recognition between them. He’d establish the hierarchy once and for all. Maybe after they could do things together.

They could go to Burnes Road for Nihari in Aslam’s Swift and drive off without paying. They could get ice cream at Kaybee’s and do the same. They could go to the Millenium mall with Tehmina on family days and eyeball the merchandise while she bought her foundation, her concealer. They could pick a maalshi off a pavement and teach him all about massage. The thought of companionship bloomed suddenly; he was so intoxicated by it, so aroused by the throbbing of the machine powering his building, that he never heard his front door swing open, or Tehmina’s bare feet slapping the cold floor as she charged him, arms outstretched.

There was a thump an instant later.

She was standing at the railing looking down when Ifti and the boy meandered past. The elevator was notoriously temperamental so they preferred to walk up to their sixth floor flat.

The younger one gawked at her bloodied face, her torn kameez, the way she held one hand pressed to her side. Ifti glanced at her expressionlessly.

Ifti smacked his brother on the head to keep him moving. He looked at Tehmina over his shoulder before he passed out of sight on the landing above. Held her gaze. Spat.

The glob of spit flew in her direction but landed some feet short. It glistened in the soft light of the energy saver in the ceiling above as Tehmina went back inside and locked the door behind her.