possessions in the name of God and then seek leadership.”

Allama Mashriqi’s life (1888-1963) was a source of inspiration and guidance for the nation. For Mashriqi, his political career, glorious and remarkable as it was, was never the most valuable or momentous thing in his life. For him, it was simply a means of serving and directing his fellow countrymen towards the goal of independence. Mashriqi set an example for other leaders and the masses to follow. Below are a few of the ways in which Mashriqi guided other leaders, the nation, and the world: 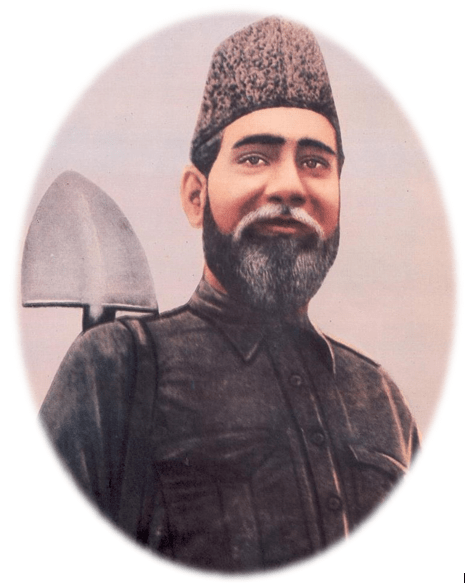 Mashriqi died on August 27, 1963. I witnessed his funeral firsthand as a young boy in Pakistan. As I was standing on the vehicle that carried the respected Mashriqi’s body, I remember seeing a sea of people. The masses of people stretched as far as my eyes could see. I have never witnessed such a large funeral. The roads along the funeral procession were jam packed. Since there was no room left, people climbed trees, stood on balconies, and clung to electric poles (risking their lives) to take a last glimpse of their beloved leader. I saw heart-breaking scenes of people crying hysterically or sobbing; some people were beating their chests with grief and many fell unconscious. According to the Khaksar circle, over one million people attended his funeral, and it was the largest in the history of the Indian sub-continent. However, the newspapers only reported the figure authorized by the Government of Pakistan. A 101 gun-salute was accorded to him at the time of his burial.

We live in a world that is too often divisive and where corruption, injustice, greed, materialism, hunger, selfishness, lack of integrity, exploitation, and disparity are all too common. Mashriqi’s life provides a source of guidance to humanity. A better world is attainable with a change of heart.

NOTE: Nasim Yousaf is a biographer and grandson of Allama Mashriqi. Yousaf’s works have been published in peer-reviewed encyclopedias and academic journals (including at Harvard University and by Springer of Europe) and he has presented papers at academic conferences, including at Cornell University. He requests the Government of Bangladesh, India, Pakistan (and the UK) to declassify Mashriqi and the Khaksar Movement’s confiscated documents; he recommends formation of an independent commission to find the truth behind the partition of India, as history being taught in these countries is highly fabricated